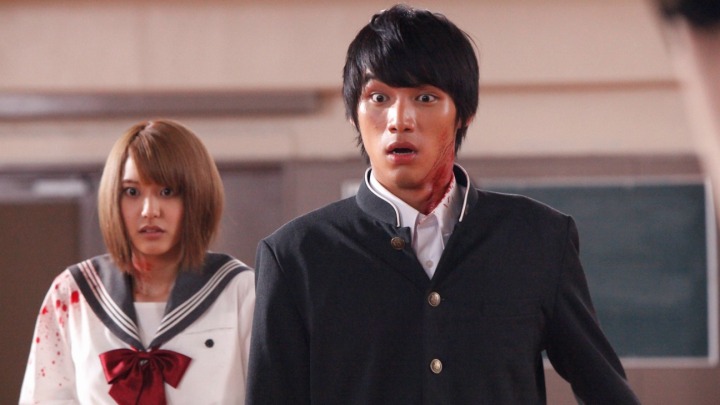 The craziness I’ve grown to love about Miike goes unhinged again. Sure, As the Gods Will may be a mess of a product but it’s entertaining enough while it lasts. It’s not Takashi Miike at his very best but there’s no denying that when it’s to be had, it most certainly is a load of fun. Takashi Miike is one of those filmmakers who has no hinges to the overall insanity or twisted nature of his work, and he usually is one to leave rather exciting results. With As the Gods Will, there’s much more insanity to embrace, even if it stands as what I see as one of the director’s much less significant efforts when compared to what he could provide in films such as Audition or Visitor Q.

In As the Gods Will, Takashi Miike takes a manga with a similarly moving premise akin to Battle Royale, in which we have youth playing games as a means of survival. Takashi Miike offers his own spin of this sort of material, which starts off promisingly when we have heads exploding in the first five minutes, caused by a dharma. These youth have no idea why they are being placed into these sorts of games for their survival, but they do know if they don’t conform or take part in any way then they are to face severe consequences.

What’s being presented in here is some sort of an odd satire, which is rather typical of the nature of Takashi Miike’s films. It’s a film that very much is a horror film by the nature of its premise and the grisly death sequences that take place on the screen, yet in a strange manner, it’s rather funny just to watch it. Takashi Miike’s dark sense of humour revels in the mayhem of his work, and that’s what helps in making As the Gods Will as entertaining a watch as it stands, it’s simply just so much fun. It’s obviously rather dark but it can’t be helped at all that what Miike is creating is something that embraces the ridiculously cheesy nature to the degree we just laugh as it goes along.

Miike’s film is as close to live-action anime as you can expect it to be, I do mean that in a good way. It’s not a film that thinks it’s an anime, but it just offers a specific joy that makes for a nonetheless entertaining watch. It most certainly has a quirky charm amidst even the darkest moments that appear on the screen and just seeing how Miike is able to bring every last second of such glory onto the screen, it makes for a truly wonderful exercise in style. This would generally be a criticism coming from my end (one of the first films that comes to mind suffering from trying to be too much like an anime is Jellyfish Eyes) but Miike’s tendency to play around makes the style fit perfectly.

Despite just how much fun Miike is having with the style and the humour he presents, the biggest problem presented is the ending. Given how promising this was from the opening sequence and the joy of watching Miike killing off his characters through these bizarre games they are forced to play, As the Gods Will ends on a cliffhanger and that just left me disappointed. I don’t mind cliffhanger endings as long as some questions being presented on the screen are at least answered beforehand, but the fact Miike doesn’t bother to answer some of them just left me rather disappointed in the concluding results.

As the Gods Will isn’t flawless, but does any of that matter especially when it’s so much of a blast to watch. Being a rather big fan of Takashi Miike’s, As the Gods Will is just every bit as insane as the usual Miike film that I have seen from the past decade, and just seeing how Miike revels in this dementedness, it’s just pure fun. Sure, it may not make any sense, but who cares especially when a filmmaker like Miike just brings out so much flair to his stories through how he stylizes them? If a satire about schools trying to gain control over the students had much more of an anime-like aesthetic, As the Gods Will is what you’ll get. It’s a lesser Takashi Miike, but even with that said, there’s a whole lot of fun to be had with it.