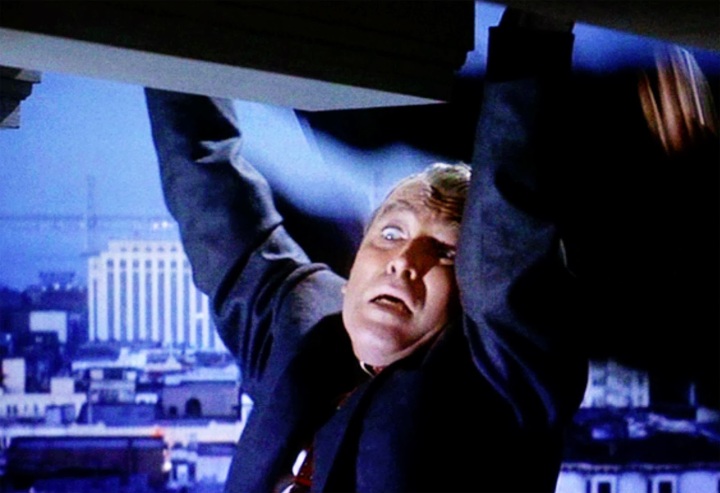 Everyone’s said it before, and maybe worded it better, but Alfred Hitchcock’s Vertigo is great. Alfred Hitchcock, otherwise known as the “master of suspense” especially among fans, finds himself at grasp with a story about past demons and their effects upon the human mind with Vertigo and what is presented may very well be the director’s finest achievement yet, combining the many filmmaker’s own obsessions (voyeurism, romance, MacGuffin) into one product – something so overwhelming for the senses coming down to Hitchcock’s placement of his viewers within his protagonist’s point of view. This sort of brilliance exposes classic Hollywood at one of its very highest points for it still remains unchallenged even today. Vertigo embodies all the good qualities of a mystery, but there’s much more behind it that makes it one of the most compelling, and therefore, one of the most beautiful films ever made.

The beginning alone would already give a clear hint for what this film is about: the impact that one’s past leaves upon what will haunt them in the present. You can take James Stewart’s Scottie Ferguson, as he gains his own vertigo and his acrophobia (fear of heights) from a rooftop chase that led to the death of a fellow officer and his eventual retirement. It indicates a theme that runs through all of Vertigo: trauma. Scottie reluctantly agrees to follow the wife of a friend from college, Kim Novak’s Madeleine Elster, a mysterious woman who is haunted by her own demons. Yet this woman is not any ordinary woman, it is the woman that fuels the core for a Hitchcock mystery as ultimately, she becomes the point of obsession for Scottie.

In Hitchcock’s films, women are not just ordinary figures placed within a mystery. Hitchcock’s women are the core of where one’s fears are driven from their own obsession. You can look at how Kim Novak plays Madeleine and you can’t help but find her to be an alluring presence because she carries a mysterious aura around her. Through the character of Scottie, Hitchcock has created a figure which also is an embodiment of another one of his own obsessions, Hitchcock’s fear of women and a desire to gain control. Hitchcock’s own use of the male gaze is something beyond the ordinary, for while there is enough being left behind from their own presence that forms his stories, the way that Hitchcock creates such an image works around why the male gaze is so highly obsessed with one figure, and what happens from the very moment something unexpected takes place involving them.

Vertigo is a film about the romanticism forming from Scottie’s obsession with Madeleine. The film’s setting in San Francisco already helps in aiding this mystery, given as Hitchcock pictures the city as a place so perfect for couples to gather, yet this setting is also where danger reigns in some of the most unexpected of territories. Hitchcock pictures such an area as a perfect area in order to work around the sense of distraction especially within the carefree attitude, for he targets a clear lack of willingness to acknowledge that something much bigger may have taken place that makes such an area so dangerous especially for a point of obsession for the romantics. It would easy to note how the cues from the score are able to give away such a theme for how they override scenes when it comes about, hinting at the obsessive attitude over one figure.

Hitchcock’s ways of working around the technical mechanics which he gathers as a means of addressing his own thematics is absolutely clever. From the score as noted, one can pick up on how the overly romantic tone creates a clear image of the desires of the male gaze, and then the visuals aid in creating a perspective from his characters and their mental state. When you look at the first moment in which we see James Stewart hanging from the ledge and dangling for his life, the distortion within the point of view being created from his own looking down at the ground below him gives Scottie the traits that ultimately would leave him haunted from there onward. Whenever Scottie looks down, once in a while the distorted lens makes clear his irrational fear of heights, and Hitchcock works around it to heighten the tension of such a piece, and by the ending of the film, it leaves behind an image that would haunt such a creation. There’s a reason it is such a haunting image, it is because we never know what Scottie is left to do after that, especially when we picture the scene from his point of view.

People may have said it better, but it still bears repeating because Vertigo is quite simply a perfect film in all regards. It is a film completed from containing the perfect mystery, the perfect leads, the perfect aesthetics, the perfect leads, every moment of Vertigo is something that cannot be replicated in this manner. It was difficult for myself to decide what was my favourite Hitchcock film especially when I come back to think of what had been left behind from Psycho and Rear Window, but with Vertigo it feels so easy for me to say it is as great an achievement as he can ever get – it ties together all of his obsessions into one piece, leaving behind a series of haunting images that never leave one’s mind. Vertigo is just as perfect as Alfred Hitchcock can ever get in every sense of the word.