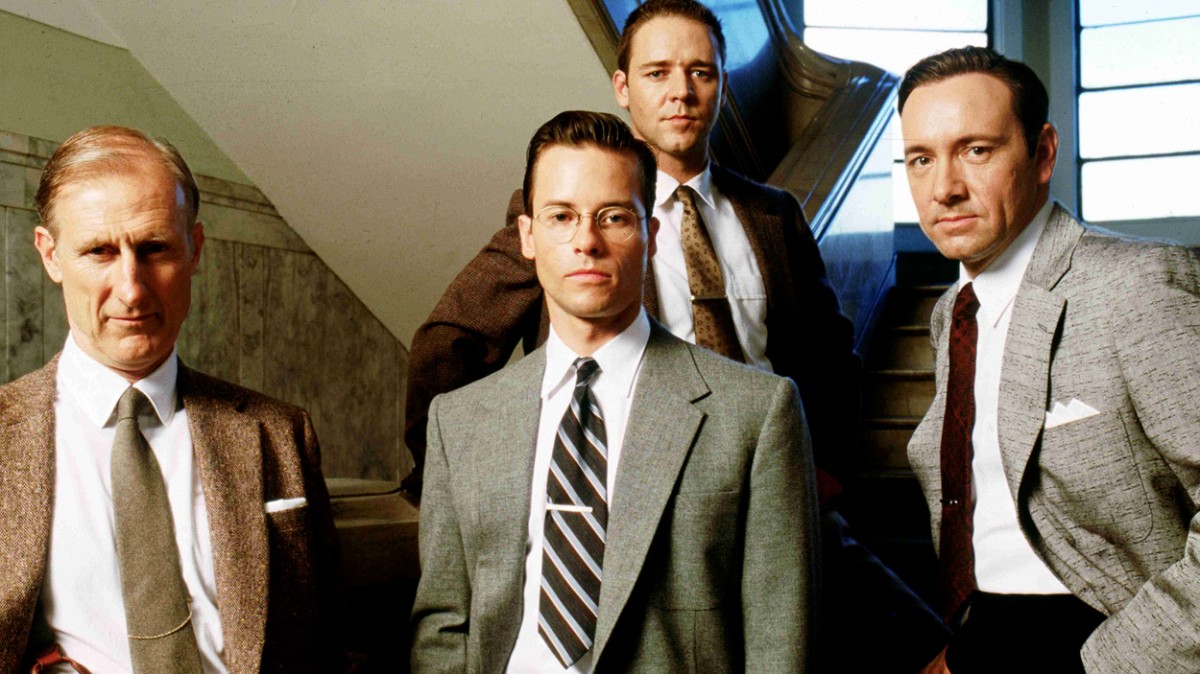 Another time capsule in a sense it goes through the glory of classic Hollywood film-noir, but if something else had come about in order to allow Curtis Hanson’s L.A. Confidential to stand apart not merely as a tribute, it takes one through an exhibit but understands its display at heart, lives in its glory – emulates a mood like the artifacts up for show it could merely have been one in itself. At its heart there is a great police procedural drama but its background is something that carries something all the more mesmerizing. It’s delightfully classical Hollywood in a 90’s manner, for a distinct blend of eras only gave away a timely feeling.

Within the film’s opening credits, a perfect setup comes clear through Johnny Mercer and Harold Arlen’s “Ac-Cent-Tchu-Ate the Positive” playing over a montage of what seems like the paradise Los Angeles is supposed to be like, with Danny DeVito narrating and then intercutting to images of the criminal underworld as run by Mickey Cohen. From there onward there’s a clear blend of style that Curtis Hanson intends to evoke which allows L.A. Confidential to live within an image of glory: one such glory that transports back to another era while at the same time carrying one’s own touch which still feels refreshing enough for the context to which it is presenting. Once we finally have a picture of the actual story, that’s where Hanson carries a greater confidence in himself by transforming an evocative capsule into his own thing.

Based on James Ellroy’s novel of the same name, Curtis Hanson and Brian Helgeland create a piece filling to the brim with nostalgia of classical era film-noir – with Russell Crowe, Kevin Spacey, and Guy Pearce as Bud White, Jack Vincennes, and Ed Exley, respectively. In all three of these characters they embody a different type of detective that would be most recognizable from film-noir of the era to which it is evocative of, but three archetypes as they come into one calls for something more in the meantime. Kim Basinger comes in as a Veronica Lake-esque femme fatale in Lynn Bracken – and every piece of the puzzle for a film-noir is put at play. As everything comes together, greater joy is set to rise.

The film’s setting is another factor that helps in allowing for Curtis Hanson to weave with ease through all the glory he is presenting: there’s a sleaziness that comes about with Danny DeVito’s role as Sid Hudgens, the publisher of Hush-Hush magazine (a magazine akin to the Confidential scandal magazine from the 1950’s as alluded in the film’s title) which is one among many genre treats that comes along. Los Angeles is often thought of as a paradise for many, especially as it is where the glamour from movie stars arises, yet under all of that paradise lies its inner power which corrupts the human mind as desires for more are only being fueled all the more. Scandal is running amok, but there’s only a determination for power that drives every character to the fates that come aboard: all of which start as the Bloody Christmas cases come in.

Brian Helgeland and Curtis Hanson’s scriptwork is quite arguably the greatest asset to which L.A. Confidential is carrying, for with the source material in James Ellroy’s novel what they create is a complexity that alludes to the labyrinthine structuring of classical era film-noir but it adds more to what is being hinted all throughout: the running feeling of temptation – made all the more tasteful by the dialogue which feels perfect for the era in which it is set yet never in a dated fashion. Whether it be in the setting or storywise, temptation just runs everywhere in order to present what may be an idea of how Los Angeles is really like amidst the seedy look of its paradise disguise. It fuels the minds of people of all sorts, actors, felons, or police officers, because inside of such a city that carries a big influence upon the minds of ordinary citizens, everyone is driven by something within their life.

L.A. Confidential is a film that never feels afraid to give its own image of Los Angeles while at the same time lives within its glory. Taking a clear influence from film-noir of the period in which it is set, everything about L.A. Confidential is made all the more wonderful when looking upon how much it carries whether it be from a delightfully nostalgic atmosphere it holds or every leading performance it offers. An ode to noir just as the film itself is one that carries that apparent image of joy, and never losing it once it goes darker. A film that feels both classic and modern in all the best ways, L.A. Confidential is the closest one can ever get to making a Humphrey Bogart noir or a James Cagney gangster film within a new generation. Delightful within its own sleaziness in all the very best ways, for there’s a glory being recreated perfectly.