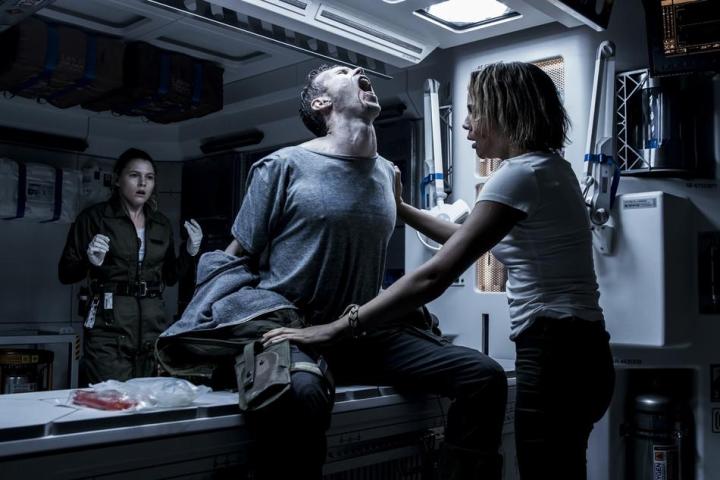 For as many films as the Alien franchise has managed to spawn, only Ridley Scott’s original film has maintained where it was at its very best. That’s not to say James Cameron’s Aliens isn’t fantastic in its own right, but it sets up what’s brought the franchise down as more films had come along: the whole universe ended up becoming far too big for its own good and thus it began to progress far too much like a video game. Now with Ridley Scott’s prequels coming along, we have Prometheus only being as broad as ever and adding to this problem even with my own enjoyment of it, so that’s where my skepticism for Alien: Covenant had rose higher. But I wasn’t merely disappointed with Alien: Covenant, I was so frustrated with what it wanted to be, even to that point it managed to leave a rather bitter taste in my own mouth by the time it was over, because of what it wanted to be all at once, and overall, how little I ended up caring for the final product.

Continuing off from Prometheus, what we have in Alien: Covenant now focuses on a new crew: the colonization ship Covenant. As they are going out searching for another planet that could be deemed inhabitable for humankind’s future, they end up finding something more on another planet that also turned out to be where Prometheus’s mission had ended in a disaster. Among many things that were set to come forth, Alien: Covenant was only going to put itself within the sort of danger that Prometheus had landed within, but supposedly from the fact that “Alien” was in the title, it would make a clear calling towards the successes which defined the original film. The most frustrating aspect about Alien: Covenant, however, comes from the many things that it wants to become all at the same time for it seems even Ridley Scott has found he’s worn this franchise far enough.

In the broadest sense that Prometheus was, Alien: Covenant isn’t short of exposition. I’ve already found myself coming to expect this on screenwriter John Logan’s end considering his own work on another Ridley Scott effort, Gladiator, and how it suffered at the hands of being riddled with explanations that place the audience at a distance for how overly complicated everything is made to sound, almost to a point of nonsense. For all the complaints that can come around when people throw them at Prometheus, at least it still found a sense of confidence in the universe it was building in itself, something which the Alien franchise has astonishingly lacked as they allowed their own universe to expand even further than it already was as a result of Aliens. And speaking of Aliens, there comes another point of frustration for me, because action sequences come and go calling back to said film and then there comes what has only hit me as the most jarring about the franchise as a whole.

Part of me finds myself liking it more when it seems like it’s confident enough to replicate the confinement of the first Alien film, but suddenly there come obvious cues towards the original whether it be the familiar score or the opening credits and their formation. It was at this point I thought to myself that Ridley Scott had already lost his own faith even in his own audience because of what had already been expected and eventually delivered out of Prometheus, but because they wanted something more along the lines of Alien, he would only provide the full form by the end of the film, and comes the action spectacle of Aliens, together with pseudo-philosophical sounding exposition – what rang clear was a great sense of inconsistency, making clear Ridley Scott’s own lack of confidence even in his own viewers. If they wanted something nihilistic, they certainly got violence thrown in their face but all of these killings for cardboard characters can be seen from a mile away at the fault of stupid actions or just utter laziness.

Michael Fassbender’s dual role will certainly be the highlight of the film as Walter and David, for what he offers here is the film’s best grasp on the most character it would carry. Katherine Waterston, for as lovely as she is, doesn’t even feel so much like a character and rather instead a dumbed down Ripley clone, although from this new crew, Danny McBride in a more dramatic turn ends up becoming the highlight of the new bunch. If anything, Ridley Scott has indeed managed to create a perfect sense of tone, only wasted on wannabe nihilism that only took pride in its characters deaths for the sake of moving further. In typical Alien fashion, the special effects are still as wonderful as ever, but its own production values only ever manage to shine their brightest in more confined spaces rather than the gigantic universe that the franchise had only sought to expand itself into becoming.

Alien: Covenant is a film that leaves a bitter taste in the mouth, even though we still have a lot to admire. I’m pretty sure that at this point, even Ridley Scott is tired of providing to what audiences would expect and then he comes out with this and instead of being really exciting or terrifying, it comes down to stuff that we’ve already seen done so many times better. Alien: Covenant isn’t even close to being the Alien sequel one would have wanted, it’s just Prometheus all over again. Alien‘s universe is only growing far too big for its own good, but even as it tried to reach out for something more with the supposed philosophical babbling, I was waiting for Ridley Scott to actually experiment with a concept that we’ve already seen being done so many different times. That’s not what we got from Alien: Covenant, just something that only feels shoehorned at its very best when it comes to whatever it wants to be, because it just can’t decide properly.

One thought on “Alien: Covenant – Review”