Eli Roth directing a film for children was always set to become a fascinating choice, but even as someone who has never exactly been a fan of his overtly gory horror films I can’t help but find The House with a Clock in its Walls to already be an experiment that would already have been worth seeing out of pure interest. But perhaps this may be the turn that his career would have needed in order to truly make his career drive my interest once again – already having known him for directing nothing but overtly gory horror films. The very worst tendencies of Roth’s torture porn-esque horror films are childish in their own right, yet perhaps directing a film intended for children allows him to embrace that aspect about his work to a much more inviting degree at that, and oddly enough, it seems like the sort of growth that his films so desperately need. 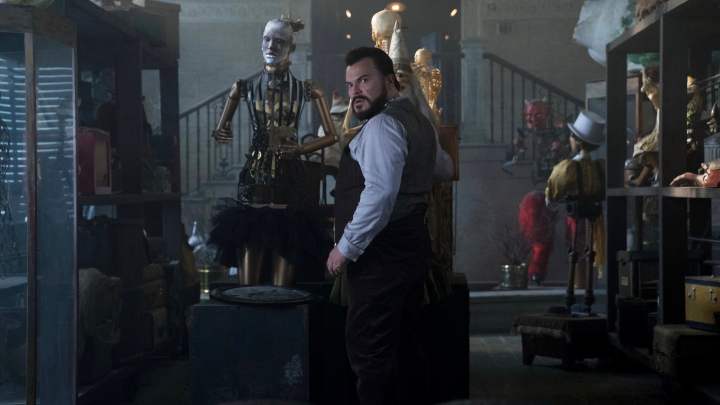 Based on the book by John Bellairs, Jack Black stars as a warlock named Jonathan Barnavelt whose nephew Lewis (Owen Vaccaro) moves in together with him after his parents die in a car accident. But over at Jonathan’s home, the young Lewis finds that something strange is up with the house for it makes a strange ticking sound – much like that of a clock, and the moment when it stops ticking would soon mean something bad is about to happen. The book is a perfect gateway for children to get into the horror genre, which is one among many reasons for me to be interested in the idea that Eli Roth would be making it into a film, but what I still find to be so strange is the idea that someone whose style had been defined by distinctively bloody horror films feels so fitting to adapt it to the screen. But because Eli Roth reaches out for far more with this Amblin homage as he sought to create, it’s easy enough to say that it has far more endearing qualities than most of his work.

Cate Blanchett and Jack Black always keep this movie ever so fun to watch, but Eli Roth allows for so much to work with given the inventive set pieces – all of which look especially stunning on the big screen. Roth’s visual style oddly fits well enough with adapting children’s fiction to the screen and even he captures a sense of wonder through all of the nostalgia that shaped the way he sees cinema; again going back to note that this film was made as a tribute to the 1980’s Amblin films as well as the horror films that shaped his own life (a nod to the famous “Here’s Johnny” scene from The Shining worth noting). It creates a perfect feel like it’s within that moment and the nostalgia never at all feels forced, but it’s so clear where Roth had grown from there onward. Touching upon his childhood interests, you still find something so clearly passionate about that point in time from the very look of the film – and it always feels so pleasing too. It feels like Roth at some of his most creative, playful, and inviting – something that I’ve found especially lacking in most of his past work.

The film’s screenplay though is one among many of the issues that this movie has to overcome – being written by Eric Kripke who is perhaps best known for creating Supernatural, even the dialogue feels very stinted most of the time. When I listen to most of the characters talk, it often feels awkward. As a matter of fact, most of this film finds itself at its most creative when it’s focused on Lewis’s life at his uncle’s home rather than when he’s at school – where he faces the typical bully stereotypes. It also reminds me well enough that during these sequences, I was more focused on the performance of Sunny Suljic rather than Owen Vaccaro – because although Vaccaro wasn’t exactly bad in his role, I found his character quite irritating in some regards. Maybe it could have been me just thinking that Sunny Suljic fits a character like this more, because seeing him playing a false friend only to become a bully just feels a tad off. But to go back to the most fun parts of The House with a Clock in Its Walls, it feels like it utilizes those aspects in spades rather than as a whole – the case being all too clear with the lack of screen presence for Kyle MacLachlan’s character, which felt like a bad waste of a great actor.

Oddly enough, if this is the sort of route that Eli Roth wants to touch more upon in the future, I must admit that I’m actually down to see him direct another movie for children. There’s a whole lot to appreciate about how he seeks to create a perfect gateway into the horror genre for children, because he clearly has so much fun with the material he has, yet its best parts never feel as fully realized as they should be. But there’s a clear growth that Roth is showing in terms of what it is that his films really need. It may not be perfect, but The House with a Clock in Its Walls if anything would be a perfect sign that Roth is capable of allowing himself to grow – because of how he’s willing to be so playful with an idea and even show a very love to the sort of films that shaped him as a person, by reaching out to that very audience too.