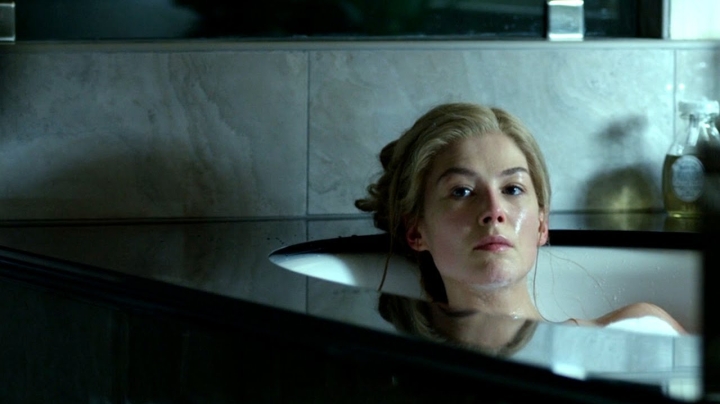 The very idea of Gone Girl would already suggest one thing, but the actual film suggests another right from Ben Affleck’s opening narration: “When I think of my wife, I always think of the back of her head. I picture cracking her lovely skull, unspooling her brain, trying to get answers.” In a story that would traditionally place emphasis on the first-person perspective of the husband, who is also a prime suspect in the murder of Amy Elliott-Dunne, you would want to see him being the victim of mass hysteria. But what makes David Fincher’s Gone Girl so amazing is what it manages to create with this very idea, because it tells you what sort of person Nick Dunne is right before we get to the driving focus of the film. From adapting the writing of Gillian Flynn, what Fincher has managed to create is also one of his finest accomplishments, a film that sets your expectations right from the get go and twists them around at moments when you least expect them. But if that already isn’t the material for a great thriller, I wouldn’t even know what is – because for all I know, this film just carries everything that I love most in watching a film by him. 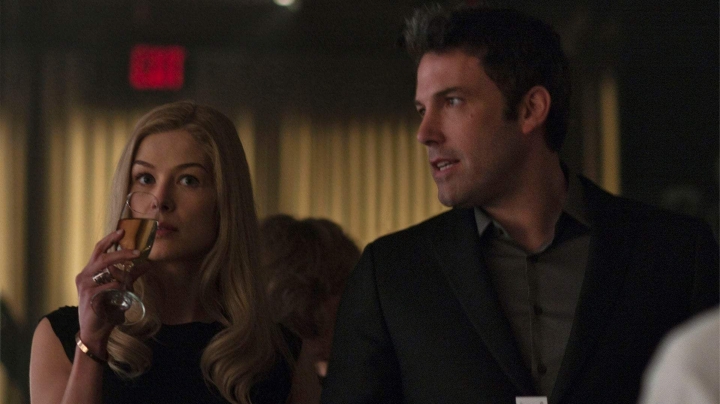 Adapted from the novel by Gillian Flynn, who wrote the screenplay herself – the tone is already set up perfectly from the first moment you hear the cues from the score composed by Trent Reznor and Atticus Ross. Nick Dunne is married to Amy Elliott-Dunne, and on the day of their anniversary, Amy has gone missing – sending the town and media inside of a mass hysteria. She was no ordinary “Amy Dunne,” but “Amazing Amy,” a popular figure in the world which they live within. People are led to believe that Nick Dunne may have killed Amy, and others are led to believe that he may be innocent and Amy is still alive. We hear so much about this aspect from Nick Dunne’s point of view, going back between past and present in order to piece together what may have happened in order to cause something of this sort to take place. In the opening moments, you already have an idea what to expect out of the relationship that Nick and Amy have with one another, but the film’s greatness only ever manages to shine all the more later.

We already know one side of the story by one point, but the moment we hear Amy’s side of the story only has our expectations twisted the other way around. But David Fincher knows how he wants audiences to feel once that reveal has been made, yet you only ever begin to realize it as the two unreliable narrators find themselves starting to collide with one another as this story is continuously being unraveled. Suddenly, your perceptions of said characters change drastically – because the more time you spend with both narrators as the film switches between perspectives, you only begin to realize how unreliable both perspectives are as narrators. Though in order to get down to the bones of what it is that makes this reveal as rewarding as it is, it would be within how the understandings of both perspectives from the opposites would have led to the circumstances that they have brought themselves within – and that there is what makes a fascinating case study out of watching Gone Girl.

In the past, you would have seen Nick Dunne’s idea of the relationship having already been set in stone – often at the expense of what happens to Amy. When you hear the perspective of Amy, on the other hand, you begin to feel everything that dominates her own world, because it is nothing more than an aura of toxic masculinity. By circumstance, she would be seen as the film’s antagonist (and not that such a label is wrong when describing the story), but the more you understand her perspective, what you find inside of her world is that Amy had only been driven to murder because she was pushed around – all the way into the descent into madness that she had been pushed towards. Flynn never argues that she is a good person all the way through, but what she presents in the character’s descent into madness is not only everything that makes her an intriguing character all the way through but also a part of an admirable statement on her own end.

The most intriguing aspect about Gone Girl to me as made clear from the case with Amy Elliott-Dunne’s own descent from being a part of this relationship with Nick is the way in which it satirizes the concept of normalized gender roles within society on the count of both the male and the female. There is a case of subtle misogyny present within the way in which Nick idealizes his relationship with Amy, but in his own position he abuses that power that he feels Amy has granted him. But as Flynn had resented the lack of female villains of this sort in the media, you still feel something even greater in the way that the media chooses to paint the story – only knowing one side of the story. What makes Fincher’s tale all the more intriguing presents itself from the way in which it changes your mind about certain characters so quickly, as characters continuously reveal their cruel sides because both characters still pertain to a stereotype that people know they want to see.

And yet David Fincher’s presentation of this story also makes this point even clearer. The whole film is structured like a whodunit sort of mystery. It is this presentation that allows the satire to bite even further because it gives the film an ability to play out in the form of an illusion, that illusion being who you really think is “good” and “bad” in this story. But because of that illusion, it only becomes clear why Nick and Amy are perfect for one another. It still feels evident from the performances of both Ben Affleck and Rosamund Pike, the latter of who already manages to create an intimidating presence just from the outside image. She is the idealized “dream girl,” and what Rosamund Pike manages to deliver is an impressive performance all the way through, because of how this image is subverted from as much as one monologue about her own psyche – a moment that I believe to be the very best that the film has ever had to offer because of the way it asserts what she’s capable of, with the toxicity of the state of their relationship being broken down in front of us.

In talking about Flynn’s own screenplay what she captures from the first moment all the way to the last is something so intricate with her own novel being used as the template. In her own choice to deviate from the novel, her own understanding of the cinematic language is incredible, knowing already what would work on paper versus what would in a visual form. But you already feel that dark humour being laced into seemingly normal moments in regards to what may deceive oneself as being an ordinary exchange. And to see how the performers would deliver her words on the screen, it’s impressive what she and Fincher could elicit from the cast. Many surprises have come along the way, such as Tyler Perry as Tanner Bolt or Neil Patrick Harris as Amy’s ex-boyfriend Desi Collings.

Gone Girl is a deceptive film on every turn, because it already knows what it is that you want to expect from the way in which the story unfolds only for the reveal to be something else of a greater scope. It is so easy to paint Amy Dunne in the light of being a villain but the manner in which we explore the psyche of trapped individuals within a normalized gender role within the society that we see as being so ordinary. But even in that normalization you see something more toxic is about to be released, and there only comes a point to which someone can be driven off the edge of reason – because we want to see one as being the victim and the other as the perpetrator. This is a film that works its way around questioning that collective mindset, because you feel hurt in the same way one would triumph – and suddenly you see something much worse coming into play. Because who do you really want to believe anymore?

All images via 20th Century Fox.