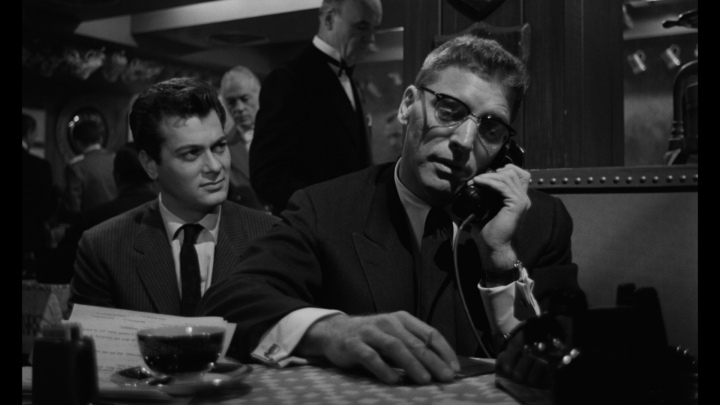 Every last line of dialogue in Sweet Smell of Success signifies greatness. Yes, it comes out of 1957, but that doesn’t make it any less significant today, especially within the world of journalism for it still bites on every viewing. This is a perfect example of one of the very highest points you can imagine film-noir achieving, as this is truly a pitch perfect film in every regard, but knowing what relevance it maintains today, it is all the more incredible an achievement. Alexander Mackendrick’s film is not merely any ordinary film-noir with an excellent script, it boasts what we can go ahead to see as one of the very finest of its own kind and it’s also rather cynical, but to its own merit.

The highlight of Sweet Smell of Success is its screenplay by Clifford Odets and Ernest Lehman. For every line of dialogue still sounds rather fresh even by today’s standards and it highlights an area of significance in which the world of journalism is still overrun with corruption. There is no true hero to this story, adding more to its cynical nature. And this is not the cynicism we come to dislike, it’s the kind of cynicism that brings a new light to how we see what’s running what we hear about inside of our world. Maybe there’s a falseness we refused to believe this whole time, but given how Sweet Smell of Success is unafraid to expose such, it’s truly one of the boldest films to come from its time, it’s an achievement unlike any other.

Neither of our leads are heroes and normally within a film-noir there’s a female within the center of the tension that’s being formed, Sweet Smell of Success only has her as a secondary aid to the story. But considering the fact that our two leads, played by Tony Curtis and Burt Lancaster are both people whom are corrupted by a desire for power, maybe there might something be more fascinating to these figures than one would imagine – these kinds of people still exist in such a world that we’re living in today, not just in journalism but all around society. They manage what the public is to believe in, and today it is still existent.

It’s also rather fascinating how well does the film flesh out the goals of our two leads and in turn we have a truly fine study of character. J. J. Hunsecker, who is wonderfully played by the fabulous Burt Lancaster (in what arguably may be his finest role yet), is a man who sets to corrupt the public mind. Then there’s Sidney Falco, in a rather unusual role for Tony Curtis at the time (he generally was a “nice guy” figure in the day), who wants to acquire the power that Hunsecker maintains. And because of this, who are we really to root for? Or better yet, are these people we are really supposed to like in the first place?

Adding more to how Sweet Smell of Success creates the emphasis on its brooding cynicism comes from how there’s something to be found in how it is all framed. Whether you look at it from how Andrew Mackendrick guides such a perfect script from beginning to end, you can always tell from his direction that there’s something coming ahead for these characters for his focus on the small things they perform with one another with such slick pacing, it moves by much faster than you’d think. Adding more, we have such beautiful cinematography being captured by James Wong Howe, I don’t know if there are other noirs shot nearly as wonderfully as Sweet Smell of Success.

Everything about this movie just flashes brilliance on all counts. If Sweet Smell of Success isn’t one of the best examples of film-noir you can find out there, well I don’t even know what is. Cynical, jazzy, excellently written, wonderfully shot, and so tongue-in-cheek with today’s world and desire for power, Sweet Smell of Success is a definite must-see, and a true American classic. It’s a perfect film on so many levels. Every performance is fantastic. Every line of dialogue shouts out excellence. What else is there to really say, I can ramble on and on about why I love Sweet Smell of Success so much.