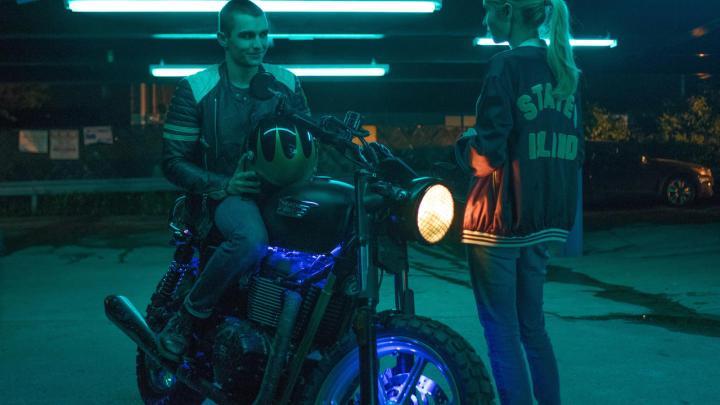 This film has so much going for it and the biggest problem behind it comes from just how tame it is. I understand the directors’ choices with trying to pander to a much younger demographic because there’s something interesting to be said, yet everything is just played too safely. My best guess is that Nerve is what directors Henry Joost and Ariel Schulman were hoping to achieve in Catfish with a message about what social media is doing to our world and ended up being preachy about it, and what they leave here is much better on one count. On the other, what Nerve leaves behind is rather easily forgettable since as noted earlier, its lack of taking risks leads to a vanishing within memory. A real pity indeed because there was a lot of potential within the idea it presents, but it ends up falling down on the count that it’s just so tame.

From the very opening of Nerve, I was not getting many good vibes coming down from the introductions of what would come out to be the film’s own metaphor – social media and its controlling over people’s (particularly teenagers) lives. I’m not at all against the message because it’s something that needs to be addressed, but what I don’t like about movies that attempt to convey such is how, as stated in the prior paragraph, they just come off as overly preachy about their ideas. Thankfully, Nerve never falls down to such a realm but this is also where one of the biggest problems comes about especially with such a concept: Nerve is just far too tame in order to really leave the desired impact upon its own audiences.

If I had to go down to just how tame Nerve was, it was clear from the dares which the “watchers” of the game had been putting onto the “players,” the dares are not really half as interesting as they could have gotten. While at least they pick up more when talking about the tension that arises in the second half of the film, what I would at least have liked when the lighter dares are put upon our two leads was for reason to be invested with Emma Roberts and Dave Franco as they’re playing the game because not so much of it came about. Compared to what may have been established from the first dare having been performed by Emily Meade in the opening, the fact that more extremes never came fast enough onto Roberts and Franco resulted in Nerve being a slog to sit through. I understand that it would be hard trying to pull everything off without coming off as preachy, but more could have been done with where they go if the film wanted to retain our interest.

Emma Roberts and Dave Franco make for an entertaining pair to watch, as the chemistry formed between the two creates all the energy that keeps Nerve from being a complete bore. I’ve admittedly taken a liking to Emma Roberts since her presence inScream 4 and she’s proven since that she can be great if only she had the right material. While the material that she has in Nerve‘s case is more just whatever all around, she and Franco carry a specific charm to their moments onscreen. It would be clear from the moments in which the two share a motorcycle ride, which showcase the very best moments between the two – but even with that said, their character arcs are never made interesting enough for the viewers to attach with.

Going down though to what makes Nerve stand out in one area comes to the visual style that Henry Joost and Ariel Schulman are aiming for. While they get consumed in the way it looks from time to time, there’s always a clear appeal from the design that keeps everything captivating for the eye. I only wish that for how appealing the visual design was, a much more cohesive story could also be presented because I was also finding myself thrown off from the actual plot threads because Nerve quite evidently is consumed in its own style and ultimately distracted by such. Not much may have taken place within the first section of the film (it was merely nothing more than just the mild dares coming about onto Franco and Roberts), but the moment in which the tension rises up from the more extreme dares of the game leads to what becomes an underwhelming resolution.

Nerve is a movie that could have been much more and should have been more. Unfortunately for how intriguing most of it is based on concept alone, it’s a film that in turn feels restricted because it desperately wants to find a way to appeal to the younger demographic and in turn it hinders the possible impact that such a story could have created. While Franco and Roberts certainly make for an entertaining pair to watch together, the biggest problem with Nerve that comes about is how thoroughly uninteresting the good lot of it is. The best way for myself to come ahead and describe what Nerve should have been heads out to a quote from Emma Roberts’s Vee, “I do take risks!” If she could take the risk of playing Nerve, why couldn’t Nerve in itself take those risks too?