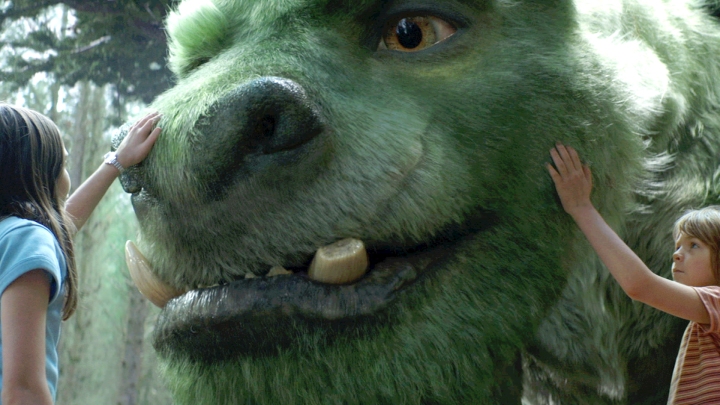 Having never grown up with the original Pete’s Dragon film I was unsure what exactly I was in store for with this new live action rendition. After Disney has been churning out many live action remakes of their own animated films which started out with Alice in Wonderland and Cinderella, they’ve brought out what may be the best of such but whether that says a lot is completely up to you. I’ve never seen the original Pete’s Dragon yet because even as a kid it never seemed like something I was into. Walking out of this recent remake indeed leaves me curious to watch the original, but even with that said, I’m still indifferent to what we had been left with – it’s a live-action remake from Disney that could have offered much more but rather disappointingly, just never delivered.

The basic outlining is simple, the titular Pete is a boy who was left alone in the woods for six years with a dragon having kept him company. He is discovered by Bryce Dallas Howard’s Natalie, who takes the boy, now eleven years old back home in order to adjust to another lifestyle. It’s interesting at least what the film is trying to suggest right here, but soon the most evident flaws about Pete’s Dragon become clear as even though the film itself isn’t badly done, you’ve seen many of these themes touched upon in other, and probably even superior films at that. To put everything into much simpler words, the first that come by when we are to think of Pete’s Dragon is that it is none other than just a “been there, done that” moment the whole way through.

I certainly can’t fault most of Pete’s Dragon at least when it comes to the care that David Lowery has put into the production, for when it comes to the effort put into the overall storytelling or the visual effects especially in regards to Elliot the dragon, it’s truly something impressive. With all of this having been said, I want to draw back to another live-action Disney remake, the 2015 Cinderella directed by Kenneth Branagh, another film which I also came out feeling very indifferent. Much like Cinderella, Pete’s Dragon is a very well-done film in many aspects, but it also suffers the same fate to which Cinderella did – so little of it stands apart from many other similar tales. It was not something I was expecting myself to feel given my indifference to the tale of Cinderella in general, but I ended up feeling just as I always would when I can point out how much I so easily recognize from many other films.

The acting, on the bright side, is never always terrible. Bryce Dallas Howard is most certainly trying her best and Robert Redford is delightful to watch. A standout, however, arises from the young Oakes Fegley, who carries a spirit to the character of Pete that is enough to keep one watching. It’s easy to be critical of child acting in cases like this (I’m not going to fault Neel Sethi again for what he had to work with in the disappointing Jungle Book), but in this scenario, you can at least atone it to the fact that the material is much better handled and thus it leaves some mark. Unfortunately, we also have Karl Urban in a role that defines the more antagonistic force for the film, but it seems to at least be in touch with the character’s stupidity that also resulted in the worst performance to be acquired out of this film.

For a good lot of the film, there’s a certain level of sentimentality that in some way, wants to recreate the sort of wonder that one would imagine to come out of a Steven Spielberg film as Pete’s Dragon is never afraid to hold back with its influences from films like E.T. the Extra-Terrestrial, but sometimes I’m left to wonder how much of this sentimentality is actually adding onto the film as opposed to feeling false because as noted earlier, you can recognize how other films have done away with what Pete’s Dragon wants to capture, perhaps in much better and more memorable ways. I like how the film is never willing to hold back upon them, but I also wish that it didn’t need to rely too much upon familiarity because it ends up bogging down the desired effect and also drags certain moments to a tedious degree as it feels so out of place and unmotivated from time to time.

Pete’s Dragon is a film that I can certainly recommend to very young children, but when it comes to the adults, I’m taking some caution in that. Some are certainly going to admire what it is leaving behind, but others like myself may end up feeling fatigued at how familiar everything feels because there is so little that stands out. There certainly are very commendable aspects that ultimately make Pete’s Dragon worth a watch, because the performance of the young Oakes Fegley and the visual effects are certainly noteworthy, but as it stands it merely is just a glass half-full. Still, it’s the best of the live-action Disney remakes that we have received thus far, but what I’m hoping for in the future is something that could actually offer a unique spin that would have the film standing out from many others.