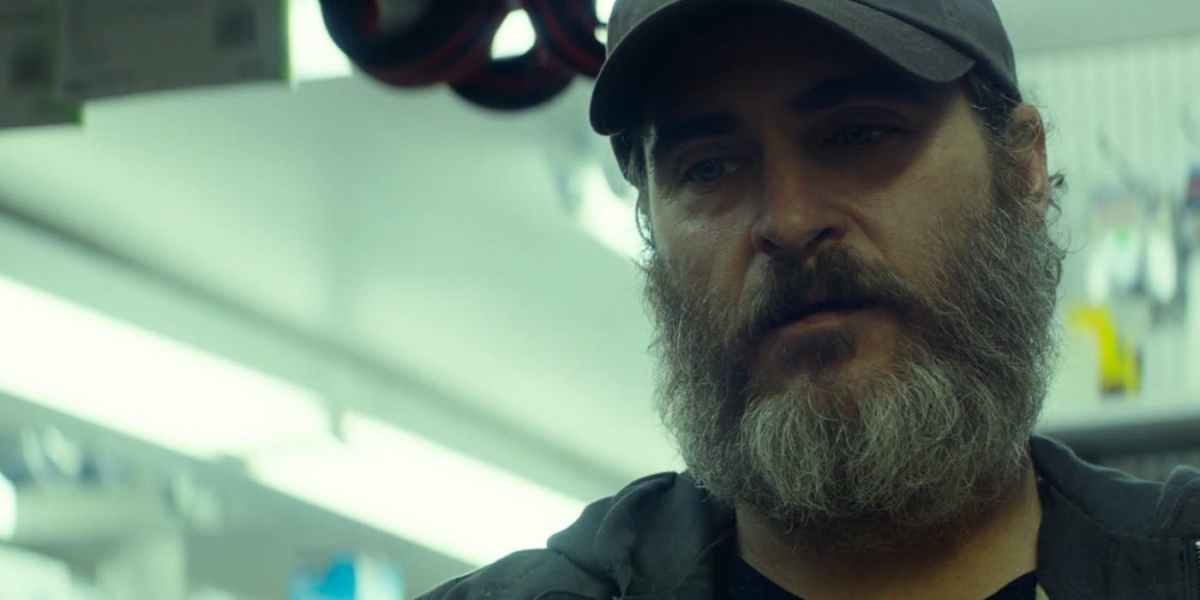 I’ve always had a bit of an odd relationship with writer-director Lynne Ramsay. I remember disliking We Need to Talk About Kevin when I last watched it years ago but only recently have I found myself being grabbed by her own work, first with Morvern Callar and now this. This is a work that feels caught within the very feeling of trauma, much like the state of its main character – and builds itself slowly within that pain. To simply say that You Were Never Really Here had defied what I was expecting out of it would undersell the very experience of sitting through it, but from the very outline of such a work I don’t think that I can simply say that I would have expected anything close to what I had received on the spot. You Were Never Really Here is a film that evokes a feeling that is difficult to describe on the spot, but when you think of it – you can’t ever let it go, because we like to tell ourselves that “we were never really there.”

Joaquin Phoenix stars as Joe, a hitman suffering with PTSD who rescues girls from human trafficking. He lives together with his mother in Cincinnati, but not without being troubled by the violent memories of his own past. After one of his jobs ends up going out of his own control, these violent memories continue haunting him as he continues to move through what may be a descent into madness. This film moves in a straightforward manner, but the very nature of the story that is being told creates a more visceral ride – one that never is so easy to describe because it leaves yourself within that state of mind where you’re frozen. Putting into perspective what it is that is haunting Joe as he moves through this very world is the power of You Were Never Really Here, and the results are absolutely stunning.

This film is only 89 minutes long, but the experience of it feels longer, because you are caught within the same feeling of pain that Joe has gotten himself caught within. Within that very short running time you feel as if you are present amidst the trauma that Joe is caught within, and it creates the running feeling of permanence as it continues to haunt Joe’s mind. This is a film that blurs the lines between what’s real and what’s all in the mind of Joe, in order to bring you closer to that mindset that brought him to where he is now. It all feels uneasy, from the very factor that violence is more implied than directly shown, because it leaves an awful image within your head almost like those that plague Joe’s mind. It’s stunning how Ramsay manages to tap into the mind of someone so evidently troubled, by showing our environment through his own point of view – you think it’s something you are imagining but there is no certainty.

Joaquin Phoenix carries this whole film on his shoulders, but it’s stunning just to observe how Ramsay creates an environment that reflects his experience – for his performance is not simply one that moves forth by his actions but rather how he responds to his own surroundings. Because of the lack of certainty about where Joe’s job is set to go, what Phoenix brings to this performance is fragility. Fragility in the sense that he does not ever want to live with such recurring memories lingering within his mind, but have reaffirmed their permanence. In what an outsider can see as a merely “ordinary Joe,” what Lynne Ramsay crafted is an insight into what it is that creates a human being the very way that we can recognize them to be – to which Joaquin Phoenix brings such fragility to this role it’s so difficult to even point at one factor that makes this role so beautiful as is.

You Were Never Really Here is a beautiful film, but if anything it is also a highly stressful one to watch. It plays out like a culmination of suppressed memories that have found their own breaking point – and the results are shattering. It’s a film that is so technically perfect from the cinematography, Jonny Greenwood’s score, the editing, and its overall atmosphere but in between those harsh moments of violence you still see glimpses of beauty. It’s a film that is broken apart by trauma, much to the point it taps into our senses and keeps us at the very edge of our seat. As the film ends, you are only left with the note, “It’s a beautiful day.” To that, we only respond with fear because those traumas that haunt us obscure the realities that we want to believe in.