NOTE: This is an archived review originally written last year.

Pyaasa (or Thirst in the English language) is perhaps the best-known film of director Guru Dutt, who also plays the lead role and serves as producer. Having already enjoyed a reputation as a classic Bollywood film, it’s not hard to see why the film has managed to make such a name for itself because this is the work that an accomplished artist could pull off, but I’m amazed already thinking about the many responsibilities that Dutt had in putting something of this sort altogether. It’s amazing just to think about that because Pyaasa is a film that feels made with the same sensibilities that reminded me of the films of Satyajit Ray, for even in moments that ring towards being what one would already recognize from Bollywood films such as the occasional musical number, you still find yourself in awe at how much more dimensions they add to the narrative – but there you also have one of the best qualities of a musical coming into play. And if someone with about as many big responsibilities behind and in front of the camera like Dutt can utilize all of this the way he did, then he truly has created a great film. 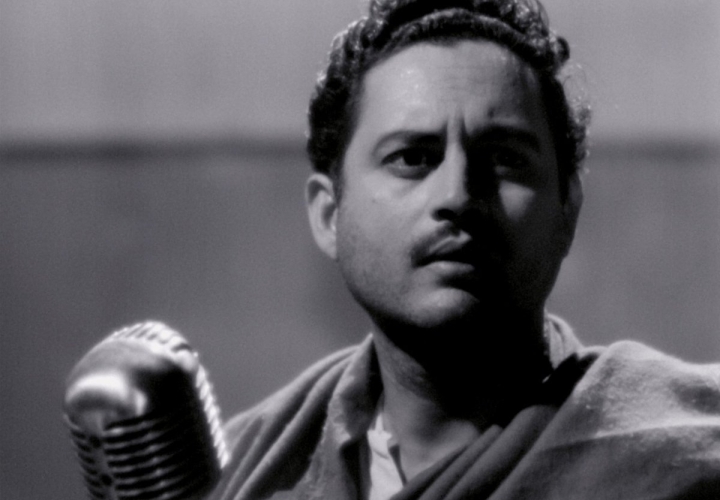 This film is a melodrama about a failed poet Vijay played by Guru Dutt himself and his attempts to get his own work more well-known in a post-independence India while trying to search for true love in the process. On this journey, he meets the prostitute Gulabo, who falls in love both with him and his poetry – so she agrees to help him try and get his work published inside a world characterized by its own selfishness. But in talking about how a simple story of this sort managed to achieve such great emotional potency one would need to look no further in just how Guru Dutt shows the nature of the world in which his film takes place, thus further making a greater case in what makes the pain in which his characters feel. And as you continue to observe the way in which Dutt’s own world keeps turning, the one thought that comes to mind is how much of this pain still feels present in our world today.

It is also worth noting that out of all Guru Dutt’s directorial efforts, this was the starting point in which he had made films that he truly had wanted to – for his previous efforts were only beneficial in getting his studio’s financing more secure. But even though this may be the first film of Dutt’s that I had seen, I was caught by how semi-autobiographical it felt, from the direction or Dutt’s performance – and knowing this background before entering the film, it only made more sense to me. This is a film about an artist trying to get recognition for what he truly wanted to show the world as opposed to what they wanted to see, and this was the starting point in which Dutt had made films he truly wanted to make, which unfortunately did not last very long especially with the failure of his next and last effort as a director before his death at 39. But in talking about what Dutt had managed to exemplify wonderfully with his own pain both in front of and behind the camera also comes an incredible social commentary.

From one look at the world in which Pyaasa is set within, it is a world that continuously lends itself to growing materialization that ends up resulting in a sense of ignorance growing among human beings. It’s important that Pyaasa is characterized by this because you already find yourself seeing only the ugliest aspects inside of a world that lies under the idea that it will move forward for the better and yet hypocrisy still finds itself running amok because everyone is in love with image rather than truth. This is a world that continuously pushes around Vijay because he is not a success in the same way that he knows his friends are, consumed by wealth and greediness, akin to how Guru Dutt had not been able to make the films he had wanted for a while until he had enough money. In its observation of how artists suffer in order to show what they see to be their true selves, there comes suffering – much like what Guru Dutt had suffered his whole life.

But even in making Pyaasa, you can still see Guru Dutt trying to abide by what he knows audiences would have set themselves to love only to turn everything against expectations – for the musical numbers only show a greater sense of pain on behalf of his characters. While they may still ring as being sentimental, there’s never a moment in which they feel out of place within the film’s context. This is a film that builds itself upon naturalism in showing the ugliest aspects of the way the world treats an artist – both those who are struggling and those who have achieved success, especially with the film’s sudden shift with Vijay now trying to reclaim his own identity. It feels almost so anti-Bollywood in that regard, because it makes audiences more aware of what they have done to Dutt in the meantime. Even during his most successful moments Dutt still feels as if he was being pushed around and the way he encourages empathy from audiences who have already built their own expectations for a story of this sort – being told what they want, only to be made aware of how harmful this really is.

The saddest thing to think about from watching Pyaasa is something that I had noted earlier, it is the way in which it plays out as being so semi-autobiographical for Guru Dutt himself. But in looking back at how much it has to say about our world, it still oozes with an incredible sense of relevance because of how much we know we are consumed by what we want to the point it turns us against our own desires. I know for a fact that this will be a film I will continuously think about because of that and if there is anything else that can really be said, I just can’t help but think about how painful Guru Dutt’s life had been. It rings in the same sense of realism that the best Satyajit Ray films have done so, but in how personal all of this feels, it only makes the experience all the more haunting.

All images via Ultra Media.