This is a difficult film for one like myself to describe, not only in the sense that it’s not so easy to discuss but it’s not rather easy to process it. Yet even amongst these difficulties, it still plays out a hypnotizing effect on its viewers and within every viewing it grows to captivate me more. My first viewing of The Double Life of Veronique at a younger age brought onto myself a unique experience of sadness, and in spite of that I still didn’t know if I were following the story correctly. Revisits grew to captivate me more and soon it all became clear to me, The Double Life of Veronique is most certainly spiritual in all its beauty. 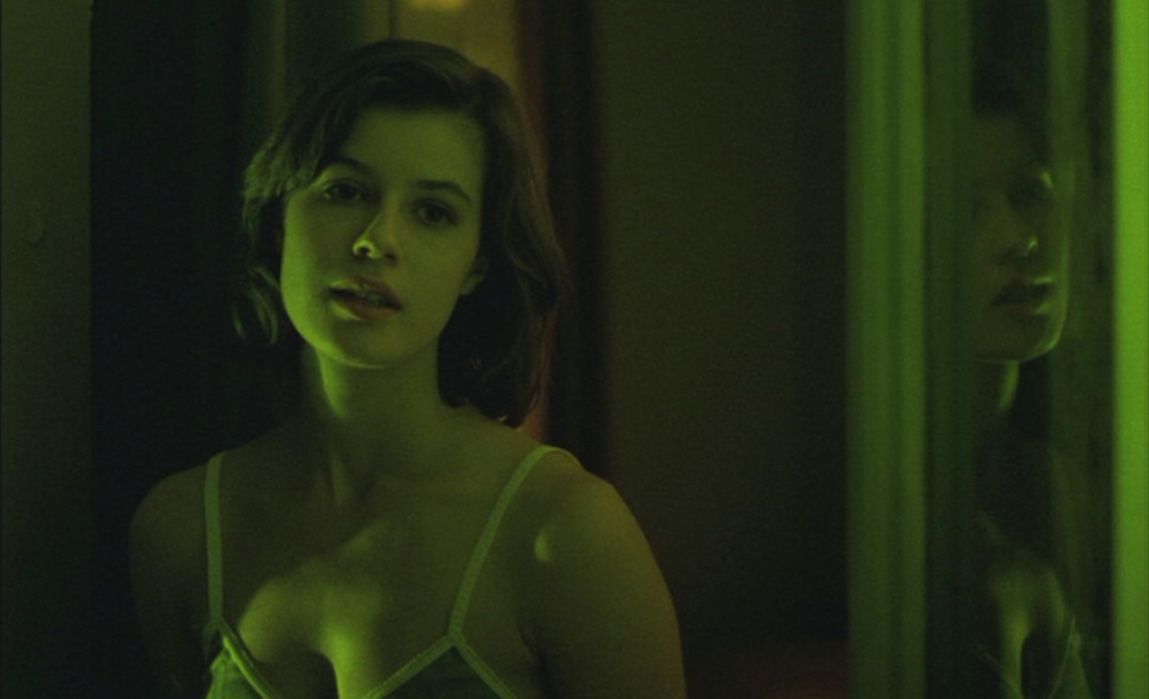 Irene Jacob stars as Veronique/Weronika in The Double Life of Veronique.

It’s most certainly rather unique when you place it apart from what else you can find out of the work of Krzysztof Kieslowski, because on a narrative standpoint it’s not the easiest film of his to access for the surrealistic, yet inventive structuring. A single viewing proved uneasy but the whole time I was never bored, and it left a haunting effect to linger inside my head. I knew from that one viewing I just simply needed to watch it again, and suddenly the reasons as to why I found The Double Life of Veronique so unbelievably hypnotizing all rang clear to me, and I knew for certain that it was truly a film that I would adore.

Where interest grows in The Double Life of Veronique comes from the development of its own concept. The title alone can give an idea of where things are set to go, we have Irène Jacob playing two similar women who do not know one another. One of them, is the Polish Weronika and the other is the French Veronique. These two women are connected in a manner to which they are unaware, but there are certain questions in regards to identity that come into play, amidst the display of intense sadness we are witnessing and feeling as a result of The Double Life of Veronique.

It’s interesting how Kieslowski brings identity into question in a scenario much like this, for even in its concept alone and the similarities between the characters to which Irène Jacob is playing on the screen, there’s some sort of a clever metaphor being presented. Yet even though they Weronika and Veronique do not know one another, their reliances in regards to their lives has some sort of an influence upon the other, and it’s shown to us in a manner most indescribable. There’s a clear picture of identity crisis which we’re given in a film like this, it’s utterly fascinating what sort of idea is being formed. The human soul suddenly becomes a mirror as a means of paralleling the whole mood and feeling of being a whole different perception of reality.

To talk only of Irène Jacob’s performance is where challenges come into play because this isn’t simply a role that could be played by any other, for the character would not have left a similar impact had she looked any different. It’s an utterly devastating performance, but also one of the most emotionally devoted roles I have witnessed on the screen in my whole life. I’ve seen roles that become the characters that they portray but what Jacob presents is revelatory, for it adds more to the enigma and devastation that Kieslowski is creating in such a work of art. It is clear Irène Jacob is a beautiful sight for the eyes, but this performance convinced me I wasn’t seeing Irène Jacob any longer, for I was seeing a different world from these eyes, and only then it went on to haunt me more.

Slawomir Idziak’s cinematography together with Zbigniew Priesner only add more to the dreamlike atmosphere of the film. The colour schemes that fill up the film are absolutely stunning in all regard, but when the operatic score from Zbigniew Priesner coming in at the same time, it builds up to the surreal effect that is created by The Double Life of Veronique, it builds up to what can only be experienced in the same manner we would experience a dream. The words alone cannot capture every last detail of what watching The Double Life of Veronique has left onto myself, it’s utterly hypnotizing what is presented.

Krzystof Kieslowski also provides what could very well be his greatest technical achievement to date in terms of his theatrical work to date. For not only is this work so revelatory when we come down to the visual aesthetic, but just the way it is lit to the tender and caring direction he is clearly expressing on the screen. Seeing how Krzysztof Kieslowski would go as a means of handling such themes and transcending through such a unique story structure only goes to remind me how utterly captivating of an experience The Double Life of Veronique truly is.

Perhaps I may not have captured everything about The Double Life of Veronique that describes my own love for such a beautiful film so perfectly, because on every revisit I find more things to discover amidst all the beauty of such a dreamlike realm it creates. It’s a portrait of the reliance upon identity, it also presents some sort of a unique allegory in regards to Poland’s part during WWII. Possibilities have never come to any end. Wording the experience is all the more difficult for it’s not easy to describe your own dreams, and The Double Life of Veronique has a distinct feeling of living through one. It’s a film that recreates such an intense sadness and passes it onto the viewers so superbly. The Double Life of Veronique is absolutely heavenly, an experience which I only grow to adore more and more as it continues to haunt me as the days go by.

All images via Sideral Films/Miramax Films.