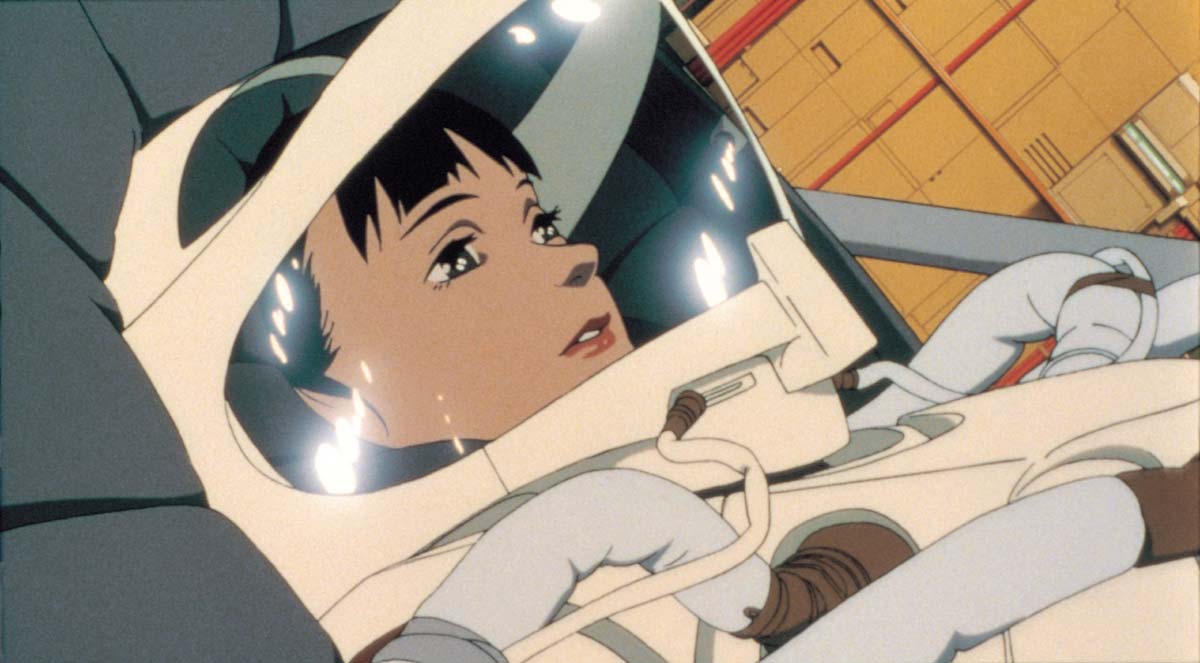 Most of this review was performed out of memory as my last viewing of this wonderful film was months back (this review was originally written in April). Generally I try not to review out of memory but Millennium Actress is one of those cases that leaves such an overwhelming impression upon every viewing and that feeling is so incredible I can’t find the perfect words to describe what I stepped out from. If only Satoshi Kon were still alive today I could only imagine he would be listed among the greatest minds working in animation for what he’s left us with right here is one of the most beautiful displays of versatility ever to have been associated with animation.

What’s presented in Satoshi Kon’s Millennium Actress is a recollection of memories that focus primarily on the actress Chiyoko Fujiwara, who once was famous for having worked with a studio that we are introduced to in the start, for it is being demolished. The film’s focus is her recollection of her own career, which creates Millennium Actress‘s unique narrative structure. This could have been any ordinary story for any person but the way Satoshi Kon works around the structuring of events is what makes Millennium Actress so distinctive, an experimental narrative that would simply triumph not only when placed amongst other animated films but among many other films in general.

Kon does not move this story so simply for what he presents on the screen blurs the line between what is real and fiction. It’s interesting to see how Satoshi Kon works around that for in live action it can be somewhat easy to distinguish dreams from the real but in animation it’s much harder to tell the two of them apart. Had Millennium Actress been done in live action I can’t exactly imagine it would create the same impact because the way it pulls its audiences into the unique narrative, for it simply wouldn’t translate the exact same feeling.

It’s also interesting how this film’s narrative adjoins the history of Japanese cinema, as we’re looking at the career of Chiyoko Fujiwara. At one point, we see she is playing a warrior inside of a throne being shot at with flaming arrows, this goes ahead to strike a memory of Akira Kurosawa’s Throne of Blood. It’s fascinating how the film refers back to iconic examples of Japanese cinema through the career of its subject, whether it can range from a kaiju film to a Kurosawa film, and to think it’s all a part of Chiyoko’s history, what could simply be Satoshi Kon’s own unique love letter to the cinematic impact of his own nation.

Likewise, the same can be said for the examination of Japanese history for Chiyoko’s troubled youth also is representative of the World War II period. While we also like to think of some of the more enthusiastic points of her life, we also are referred back to the humanism that Japanese cinema has aimed for, which already goes to strike me with memories of watching the films of Yasujiro Ozu. In a time in which Japan had been seen as the enemy of the Americas after the bombing of Pearl Harbor, their cinema exposed a more humanistic side of Japan which went to show how they also find that other lives are just as important as their own.

As most of the film is presented through memory, the TV interviewer Genya Tachibana and his cameraman are interpreters for this subjective realm. The two of them are attempting to see what Chiyoko is recalling through her own memory in an objective manner, but the memory of her career is a subjective reality. They are the eyes of the audience and they begin to ask questions about what is real and what is not, because most of Millennium Actress overwhelms its viewers in this sort of dream that isn’t particularly easy to describe.

At least now that I’ve gotten this out of the way, I only have much more desire to watch Millennium Actress again. This is one of the most fascinating experiments in terms of narrative structure, something that most other films cannot accomplish in a similar manner. The animation is absolutely breathtaking from beginning to end, and it’s amazing how it also captures something beautiful in a simple action, and suddenly it all results in something all the more heartbreaking too. It’s a complicated piece but truly an absolute must-see, a wonderfully overwhelming experience that words cannot perfectly recapture.

All images via DreamWorks.