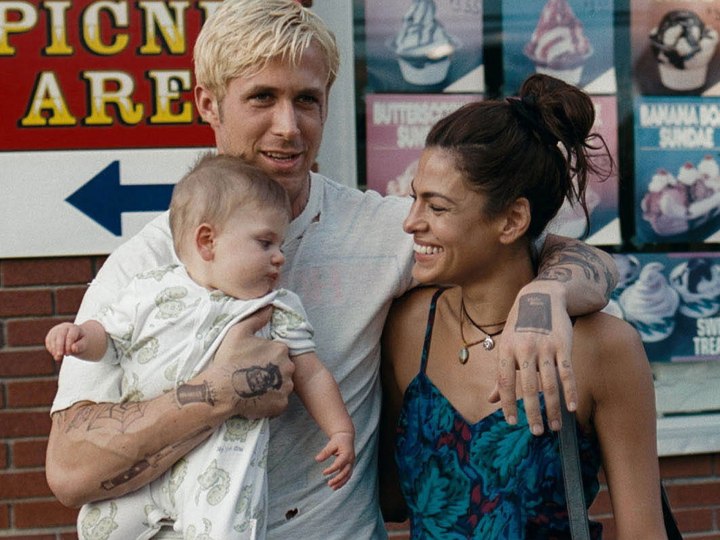 The Place Beyond the Pines is a very interesting case for myself because it’s a film which I remember being extremely fond of back when I first saw it, and over time and many revisits I’ve found myself liking it less and less each time. That’s not to say that I’ve rewatched it enough to think of it as a bad film, because it’s very far away from such a distinction but it certainly feels as if after having worked so well once, it ended up losing its own way within another point and in the end, a film which I remembered as something I thought rather highly of chimes out as a film which only left me all the more disconnected from it. It feels rather disappointing seeing what Derek Cianfrance is capable of when he directed Blue Valentine.

Opening wonderfully through introducing the character of Ryan Gosling within his profession as a motorcycle stunt performer, there’s a sense of promising characterization being offered. He’s married to Eva Mendes, and he gives up his own profession in order to become a father. There’s a feeling right there that we can already get the sort of idea what this film wants to be, and while this is lasting, the rawness to the emotion is extremely admirable. What’s unfortunate is the fact that after starting up with so much promise being offered, a highly frustrating experience soon begins to follow after more characters are coming in.

The problem is especially apparent when Bradley Cooper’s character becomes the focal point within the second act. After the end to Gosling’s contribution to the story, suddenly The Place Beyond the Pines becomes a completely different film. The problem is that after Ryan Gosling’s arc is done and over with, the next one that comes in, is just not nearly half as interesting because while Bradley Cooper’s character is hinted at within Gosling’s story as it’s taking place, we are never given enough of a focus on him in order to really sympathize with him. Although I admire Bradley Cooper’s dedication to the performance, what I don’t really like is the sudden shift with focus given as it doesn’t feel as if the same film is coming about, we’re presented something just uninteresting.

A sense of ambition most certainly can be found in how big the story can get, especially with the time gap that takes place in the last act which also introduces another set of characters. Unfortunately it seems as if this is where it ends up holding against the final product, for the sudden shifts in focus seem rather rushed and thus the feeling of disengagement can really be present all throughout. While I do admire it for the ambition in being such a big story, it seems like The Place Beyond the Pines has forgotten to create a clear point of interest because the sudden shifts in turn only harm the approach as within each story, there is either little or no buildup coming to the next.

What’s admirable about this film is how it presents the consequences coming out of the decisions one makes in life. The sad thing about these morals being presented is that the film never really left so much of a sense to truly connect with any of it. The sense of development at its very worst, is criminally underplayed and thus, it never really clicks as well as it should have. It’s a shame when you come to consider what Derek Cianfrance has already proven himself capable of especially when he directed Blue Valentine but while he is indeed perfectly confident enough when going behind the camera for a film like this, it’s made clear he’s not ready to tackle an idea like this as it’s too big for him to handle.

The strengths, however, arise from the acting. Ryan Gosling is undeniably the best part, because he certainly is the one who is given the most development from everyone else in the cast. Bradley Cooper at the very least is dedicated enough to a performance like this in spite of lack of engagement together with his story, and Dane DeHaan, whose talent I have been looking forward to lately, lets his capabilities shine. The sad thing about how great all of these performances is the fact that the film as a whole is so disjointed and thus, it never really created a good sense of resonance right after that.

At one point, I absolutely adored The Place Beyond the Pines but within a short time, I started finding many things about it that bugged me, and every time I came back since, I liked it a bit less. It wasn’t until a recent revisit where I’ve found myself feeling extremely conflicted in the very end, because it’s not the reaction that I would have wanted to pick up from something with so much admirable talent shining on the screen, especially with all the great performances from the talented cast. Derek Cianfrance, for all his ambition, just seemed to have taken an idea that was way too big for his little hands.