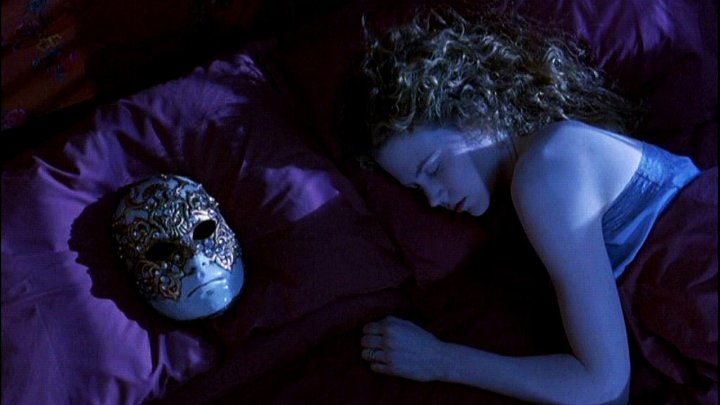 My first memories of Eyes Wide Shut were not the fondest – even though I had seen many of Kubrick’s other films (all of which, then, I loved) prior to watching his swan song for my first time, I did not like it very much. Although over the years, much talk upon looking back at many of Stanley Kubrick’s other films has considerably made my opinion of Eyes Wide Shut grow favorably. Suddenly I realized on another viewing that perhaps I may have misunderstood what was Stanley Kubrick’s intention behind such an odd film, and eventually, I grew to the conclusion that Eyes Wide Shut truly is one of the finest swan songs of all time.

From the casting alone, it is clear that Kubrick is trying to draw a parallel between performance art and marriage – when it is put into consideration that at the time, Tom Cruise and Nicole Kidman were married to one another. They play a husband and wife in here, and both ends are fueled by betrayal, which sets off the tone for Eyes Wide Shut. Nicole Kidman’s Alice Hartford has cheated on Tom Cruise’s Bill Hartford, which sets the New York doctor on a quest with an obsession for a sexual desire on his mind. It is clear from the casting of Tom Cruise and Nicole Kidman against one another that Kubrick was obsessed with the imperfections within marriage, and what happens upon a discovery that may damage a relationship greatly.

It’s also worth noting how the soundtrack, which is filled with very many romantic songs, is especially contradictory to what is presented on the screen. The romantic songs are to provoke a form of excitement, which is a feeling that is fueled by sexuality. It is clear right from his provocation of the viewers’ desire for eroticism like the marketing may have promised that there is a certain desire within the head that he is condemning from the viewers. These sexual desires running through the head that Eyes Wide Shut had promised provide a setup for something more uncomfortable, because there’s a hint to a sense of danger coming the way of Cruise’s Bill Hartford.

Looking at Eyes Wide Shut from its exterior, there’s a theme of misogyny running along that adds more to what forms such a haunting experience. The misogyny running through Eyes Wide Shut adds more to the film’s commentary on the higher class and their privileges. We know already that thanks to his job, Bill Hartford is a wealthy man. Alice, from the confession that she has fantasized about finding sexual pleasures with other men, is already the clue that she is only around as a means of providing desires for men. Bill remains faithful to his wife, even though all of these women around him within this fantasy, are clearly giving him opportunities to feed his sexual desires, resisting interrupting the course of another class.

There’s an interesting way to look at how Stanley Kubrick is presenting human qualities to characters who normally would be viewed as something of more significance because of their wealth. With the knowledge that Alice Hartford is carrying a goddess-like beauty to her own natural image which starts up the film, the next instance in which we see her, she is on the toilet. Even with her affiliation with the wealthy Dr. Bill Hartford, we get an image that they are no different a species from us, they are still human and they are fueled by desire, it seems as if he has gotten as close as he possibly could to what runs on their mind through all the erotic imagery he presents here.

Eyes Wide Shut is not a film that will prove itself within a single viewing, because it is a very troubling one to think about and pinpoint every last detail that forms a deeply layered fantasy unlike any other. Every time in which I come back to Eyes Wide Shut, I always feel as if there is always something new to pick out from what it is presenting. It may indeed be Stanley Kubrick’s most intimate understanding of the human psychology to date, and for what it has managed to accomplish, it is an exceptional final note to the career of an artist like he. Even if we may see The Shining as one of the greatest horror films ever made, I see his swan song, Eyes Wide Shut, to be Kubrick’s most frightening film for its exposure of the truth behind what fuels the human desires.