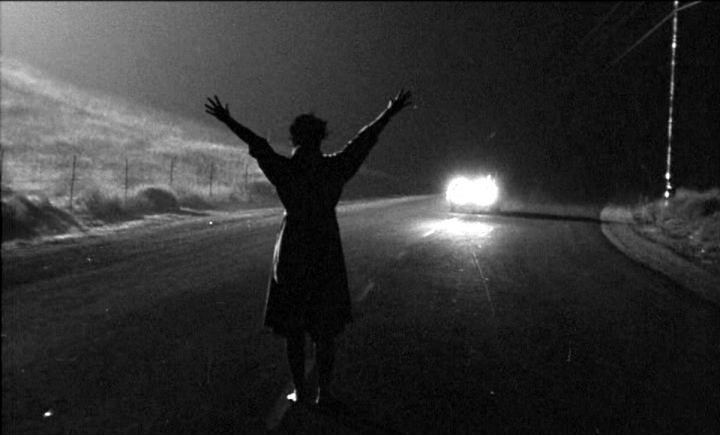 Robert Aldrich’s Kiss Me Deadly is a convoluted detective noir, just the way I always like everything playing out. Yet the realization behind whatever it is that we’re presented in Kiss Me Deadly gives the idea that indeed there’s more to it than just being a complicated detective story. As a matter of fact, what we have here is one of the most perfect representations of the paranoia surrounding a specific fear of a nuclear apocalypse. It’s there we see Kiss Me Deadly isn’t completely the noir that it promised itself to be, maybe it was more a horror film about the devastation that Americans had been afraid of, especially amidst the paranoia in regards to the Cold War.

The mystery of Kiss Me Deadly begins with two words uttered by a debuting Cloris Leachman’s Christina as being told to Ralph Meeker’s Mike Hammer, “Remember me.” Soon, she is murdered, Hammer is knocked unconscious, and upon recovery, he still keeps Christina’s last words in mind and soon, this guilt takes him on a road for vengeance, but maybe she was also behind something so much bigger, for she had just escaped from a mental institution. Robert Aldrich knows perfectly how he is to set up where Kiss Me Deadly to go, for already in the first few minutes he creates establishment for something complicated to follow, and as he promises, he delivers.

Kiss Me Deadly is arguably the most well-known portrayal of private eye Mike Hammer on film (before Kiss Me Deadly, he was played by Biff Elliot in 1953’s I, the Jury) and indeed, the greatest representation of him. He’s a tough figure, who is indeed just about as powerful as those who are coming after him. Yet what makes him fascinating is probably the fact that he isn’t so much of a hero in the manner you would remember thinking of a character like Philip Marlowe. It’s where something peculiar rises because most of the detectives in film noirs would be seen as heroes, yet Hammer embodies a good amount going against the conventions, making Kiss Me Deadly a fascinating case study. Being played gloriously by Ralph Meeker is certainly one thing that does help in forming such a memorable figure out of someone much like Mike Hammer.

Paranoia is the biggest startup for mystery in Kiss Me Deadly. The paranoia becomes clear just from the simple uttering of “remember me” and Mike Hammer starts to wander from there. It seems aimless, because of the typically labyrinthine structuring of many of the greatest film noirs, but everything becomes clear as the film progresses. Knowing already that there is “something big” in regards to the mysterious woman he picked up on the road, he is led to find out a particular “whatsit” which another woman claiming to be her roommate is after. Yet there’s more to something like this that creates a product as impressive as what we are offered. This paranoia on the outside, reveals so much more to the subtext being placed in what truly makes one of the most wonderful film noirs ever made.

Aldrich also teases at a strange implication with gender politics. What forms some of the best film noirs is how they examine the relationship between the man and the woman. In the case of Kiss Me Deadly, the setup makes clear what Aldrich intends to examine, for Cloris Leachman serves as a femme fatale to Mike Hammer, leading him tangled within this web of paranoia in order to help him find his own identity. There, we have a clear indication that the female shows power over the male, for they are a vital part in helping a character much like Mike Hammer find out whom he really is.

What the paranoia of the mystery we have in Kiss Me Deadly so accurately captures is an intense fear running through American society during the day. This fear is indeed that of a nuclear apocalypse. Aldrich teases at this so brilliantly with the “whatsit” that is the core to Kiss Me Deadly. This “whatsit” is an allusion to the tale of Pandora’s Box, and the mystery of what is inside is most notable for having inspired the glowing briefcase in Quentin Tarantino’s Pulp Fiction. For the day, it would be perceived as something being hidden this whole time from the enemy during the Cold War, and if in the wrong hands, who knows what could have happened. In the ending, we see what exactly this paranoia has built up to, quite simply one of the greatest conclusions for all of American film.

In a few simple words, Kiss Me Deadly is quintessential film-noir. But for something made in 1955, it’s simply unbelievable that it was said year when the film had come out because what we are given is something that is so clearly ahead of its time. Kiss Me Deadly already promises quite a lot from the opening credits, which scroll backwards, hinting at the unsettling atmosphere that we are to receive. You can try to follow the mystery, but it will drive you into a state of mind that is indeed similar to what the atmosphere is evoking, the paranoia that infiltrated American society during the Cold War. This is truly one of the finest film noirs ever made, down to the bone with the incredible structuring, acting, and the hardboiled atmosphere, it simply excels everywhere.