Not a particularly easy film to watch, not in the manner that the content creates a rather rough display, but because the atmosphere forms an overwhelming impact upon the emotions of the viewers given the state of life which Bicycle Thieves takes place. This is not particularly unfamiliar especially with films of the Italian neorealist movement, but arguably the most well-known film to come out of said period for Italian cinema is none other than Vittorio De Sica’s Bicycle Thieves. In every way, Bicycle Thieves is extremely representative of the best qualities to be expected from Italian neorealist cinema, an experience that touched me rather deeply from my first viewing, giving off the same impact upon every rather troubling revisit. 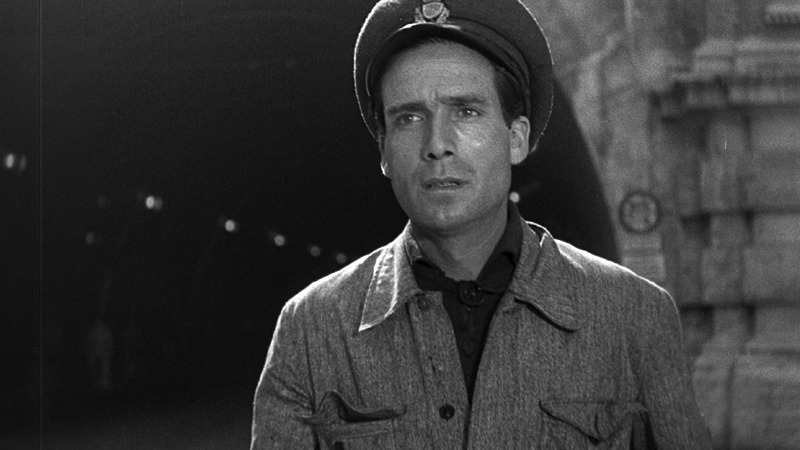 Italian neorealist cinema is often characterized with stories being about the lower class in society, but together with their techniques which involve using non-professional actors and filming on location. Bicycle Thieves indeed utilizes all of these in order to create the feeling of naturalism running throughout the picture, hence we are also brought much closer to the situation which our lead characters are inhabiting. There’s a sense it almost feels like a documentary filmmaker is moving around watching a specific person go on with his life in such a rough state, and the realistic feeling of the situations which we are watching on the screen forms an impact that becomes so difficult to describe.

Our story revolves around Antonio Ricci, a man who is unemployed within post-WWII Italy. Upon the moment he manages to get a job, his bicycle is stolen and soon he must go wandering around Rome together with his son, in search of this missing bike. This story alone goes to give light to the poor working conditions in Italy during such a time period and the indulgence into this world overwhelms us as viewers to the very degree that we can’t help but imagine what it would be like had we lived through such harsh conditions of life ourselves. What Vittorio De Sica creates room for within Bicycle Thieves promises incredible heartbreak, and at that he truly succeeds.

Antonio Ricci is played by the factory worker Lamberto Maggiorani, which creates more of a sense of authenticity to this performance because he, together with the young boy playing his son, Bruno, a nine-year-old Enzio Staiola, are not actors. The best way I can imagine that they were creating such an impact from their performances was that Vittorio De Sica had them live out their own lives in the poor conditions which we are watching on the screen. Even with the obvious fact that they may not be father and son in real life, the bond that they share is truly something incredible for they manage to convince the audience that indeed, they are. You can see in every slight action on the screen that Antonio wants the most for Bruno, in spite of what little he has. From the start all the way to the heartbreaking final shot, we are not watching actors anymore, but a real father and son trying to look for the most within this poverty-stricken world they are living in.

The use of real locations also adds more to the authenticity of such a wondrous piece because the manner in which Vittorio De Sica frames the natural lighting into place, builds to some kind of authenticity you would not be finding within a film set. It only works wonders with immersing the audiences who are watching Bicycle Thieves into the poor environment we are seeing, only to be more aided with the beautiful black-and-white cinematography and the tragic score by Alessandro Cicognini, which helps to highlight the pain and suffering that had been felt by the lower class citizens ever since the bombing of Rome in WWII, as they were soon left to live within the crumbling.

Bicycle Thieves is a film that has aged so splendidly, for its picture of poverty still rings true within this day and age. I have always struggled since my first viewing to find the words in order to capture the authenticity to whatever it is that I have been feeling as I was watching Bicycle Thieves, and maybe what I might have left beforehand might not be enough. We’re not watching a film that’s simply about the lower class and its sufferings, because what Vittorio De Sica makes of his viewers is having them live through this harshness, and within no time, an overwhelming feeling of heartbreak and guilt comes to our minds, only to be let out even more by that final frame.