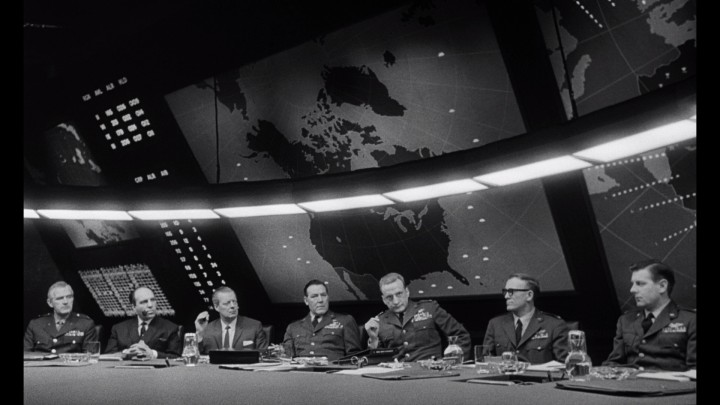 Dr. Strangelove is the funniest movie ever to be made about such a deadly serious matter like the Cold War. Stanley Kubrick’s ability to take such a thing as nuclear annihilation and turn it into one of the most bizarrely hilarious films out there is truly a thing of genius, could anyone else pull it off and create a result that was nearly as successful as what we have here? It’s not hard to create politically incorrect comedy, yes, but the nature of what is presented in Dr. Strangelove still would not be very easy to recreate regardless, it’s a picture of its own kind, for it bites even in this day and age. It is uproariously funny as it is still relevant with the state of terrorism within our world.

It would be very evident that the opening gives a hint towards a sexual nature in terms of its comedy, for the positioning of the airplanes within the process of re-fueling are played within the light of bizarre sexual innuendo. As we observe the opening credits, the manner to which Kubrick chooses to film the planes upon re-fueling resembles a mother providing the food for her own child, only be played in a more suggestive manner with the romantic music playing in the background. And seeing this was a film released in 1964, it’s interesting seeing how Stanley Kubrick would manage to slip everything past the censors. But considering what else this humour tackles within the way all of it is presented, we also have what is truly one of the most brilliant of all forms of satire. This is the sort of comedy that also places a feeling of fright inside of its own viewers, when one comes to consider how broodingly dark it is with its humour.

We have such serious matter at hand, but the ideas suddenly become funny amidst all the ironic imagery plus the silliness to the characters’ names. Yet even amidst all this silliness, it’s a reflection of how paranoid the human soul can get at a time like this. The mind loses all sense of subtlety and then we just think of the enemies with some strange nicknames, but then Kubrick gives his own characters the treatment. We have strange names like President Merkin Muffley or Major “King” Kong, but even with the exaggerated nature of it all, the accuracy to what it portrays is incredible. It builds itself upon the irony that the concept of nuclear war is a silly action for countries to perform upon one another, and how susceptible mankind was to the paranoia that had come about during such a time. Our biggest fears ultimately become what we laugh at, with how cowardice is pictured in Dr. Strangelove.

One thing that’s also worth noting is how for the time, Dr. Strangelove opens up many homoerotic overtones that also make the whole thing a lot more hilarious upon thought. You can look upon the suggestive positioning of the airplanes within the opening credits, hinting more at the frank sexual tones that would come about later on. Throughout the film, there is only one female character, played by Tracy Reed, but the characters are never aware of any instance of homosexuality yet they interact with each other to such a manner that it cannot be helped it is felt running throughout all of the film. It’s evident through the interactions between Captain Lionel Mandrake and General Jack D. Ripper, and suddenly the instances in which the two come together become all the more hilarious.

What Kubrick does with the audience expectations in a film like this is something out of the ordinary, too. The horror that comes out from nuclear confrontation is one thing that he establishes, but what Kubrick plays around with is the goal of the hero. If our heroes succeed, the result is indeed nuclear annihilation, but because of how Kubrick toys around with what he knows the audience is to expect, we soon come to realize we were rooting for the misery – a sign that the extremely dark aspects of Dr. Strangelove‘s humour have worked so successfully. Going back to note the irony of the situation which had been formed, the use of Vera Lynn’s “We’ll Meet Again” upon a montage of what appears to be the destruction of civilization is where Kubrick achieves such a level of coldness that in turn plays a haunting effect.

The screenplay is perhaps another one of the film’s greatest assets. The screenplay was written by Kubrick, Peter George, and Terry Southern, and initially it was intended as a serious adaptation of George’s novel Red Alert, but what he found is that most of the lines written were too humourous and decided to develop something from there. The structuring alone gives away the idea it is a pitch-perfect screenplay, but given the recital of such lines as the famous “Gentlemen, you can’t fight in here, this is the War Room!”, it’s from Kubrick’s use of language that makes the dark comedy all so successful.

Peter Sellers is a joy to watch in this film – in his multiple roles as Lionel Mandrake, President Merkin Muffley, and the title character of Dr. Strangelove. He becomes each of his three characters so perfectly well, having improvised most of his lines, and the naturalistic feel to his delivery is something unlike most others. Among more great performances in the supporting cast include George C. Scott and Sterling Hayden, both of whom have such a subtlety to the insanity of the characters it’s unbelievable what they pull off. Yet given how Sellers has the most hilarious parts, it’s amazing how sane he seems in comparison to most others inside the film too. This sanity is where something funnier comes about, because the rationality to his character of Merkin Muffley at such a time encapsulates how nothing can be done to stop paranoia on all ends.

Where Stanley Kubrick leaves behind a most fascinating insight at the state of mind during an event like the Cold War, the biting satire in regards to the paranoia is where so many wonders all come to shine. In Dr. Strangelove, we never realize how much we have come to laugh at our own miseries, and just seeing how scary it all comes out in the end just shows how perfectly established the dark humour truly is. This is a perfect example of political incorrectness done right, and what’s frightening is how even today, it still bites within paranoia in regards to a future attack. It could happen anytime, anywhere, only Kubrick could ever make it as funny as it was in here. It’s a comedy that is so dark to the very point, it is frightening to see where civilization is going especially within its current state.

2 thoughts on “Dr. Strangelove or: How I Learned to Stop Worrying and Love the Bomb – Review”