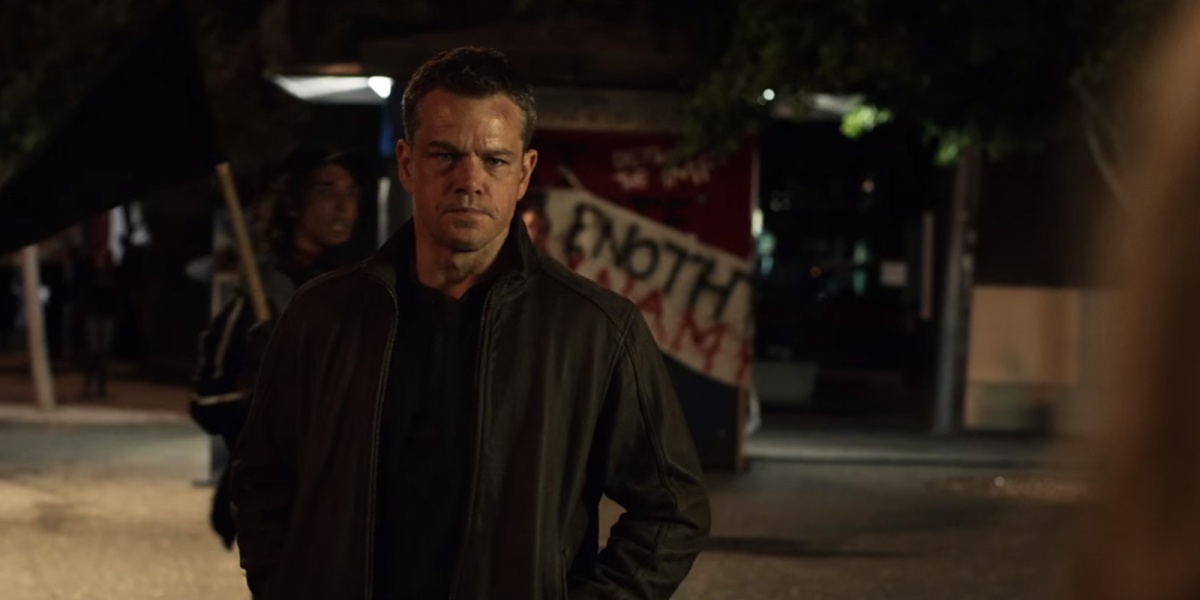 If I were to be perfectly honest, I don’t like Jason Bourne as a character. Even though I like The Bourne Supremacy and The Bourne Ultimatum, a thought still runs in my head that I can’t say I love them because Jason Bourne has never hit me as all that interesting of a figure. Part of me was willing to trust Paul Greengrass returning behind the camera because his films were the only films in the series to have kept my interest because there’s a feeling that more conflict that surrounds the character overall even if the cinematography especially during some sequences can be rather jarring. In the case of Jason Bourne, it takes every last one of my pet peeves with the previous films and puts all of them into one product, in turn resulting in a true disappointment in every sense of the word.

Matt Damon reprises his role as the title character one more time.

One thing I find to be most astonishing about Jason Bourne is how little it establishes throughout its running time for what makes the majority of the movie are more uncovered secrets about Bourne’s father but these moments feel so shoved in, otherwise resulting into an overly convoluted storyline that in turn alienates its viewers. While I don’t particularly care all that much for The Bourne Identity on the count that it never properly established a reason for myself to care for Jason Bourne (something that was fixed with Supremacy and Ultimatum), something much worse at hand is presented in Jason Bourne‘s scenario. Not only is it convoluted when it comes to how it stitches together all the small details, but a lot of the more broad story points that are made all too clear to the viewers end up creating a shell so predictable and excruciatingly dull.

If there’s another thing that does irritate me even about Paul Greengrass’s entries into the Bourne series, it was the shaky camera. While I didn’t mind it so much in Supremacy orUltimatum, there’s a reason as to why it worked effectively in their cases. If we are to talk those films, what the shaky camera managed to create was an environment that placed the viewers within the sequences. As for Jason Bourne, there’s no way to even feel that sort of mood because the camera shakes far too much to the point the action can hardly even be seen. It’s not something that runs for every action scene in the movie, but where it becomes most noticeable it is all the more aggravating because how can we get real enjoyment watching punches being thrown upon one another when the camera movement is jarring enough to obscure the action? This is one thing, but it even happens in smaller scenes where it so obviously is unnecessary.

Coming back to The Bourne Identity, which I find to be the weakest of the prior three Bourne films, we have the chase sequences. In The Bourne Identity, there’s one chase scene in the second half of the film and while it went on, it dragged everything down a tad. So how does this go on to affect Jason Bourne? You have two overlong chase sequences that drag the film to a near unbearable degree for it adds up to another issue that runs with Jason Bourne, the pacing. It clearly feels as if there is never a moment in which the film wants to take a breather especially when it is necessary so that we can understand the motivations of its own characters more but of course, the long chase sequences must happen and unnecessarily add far too much to the film’s length and for how it almost felt like no real tension was coming out of them, it was so easy to zone out at just any point while they went on. I’ll give the film credit for the final chase sequence because it had some more tension arising there, but it was at that point the stakes came about, which should have come much faster if it wanted to keep our attention.

Going down now to the performances, Matt Damon isn’t particularly terrible as Jason Bourne as always but I also can’t help but think about so many other roles which I would much rather watch him in. At this point in the series, just about every performance, regardless of the talent that the actors have, felt so phoned in I couldn’t find myself getting involved with whatever conflict was supposed to arise. Though if I had to focus on one actor who felt so much more wasted than anyone else, it would have to be Alicia Vikander of all. Vikander, who’s proven herself to have incredible talent in Ex Machina and A Royal Affair among a few, but her performance in here isn’t something which I blame her on. The problem arises from how it so evidently feels like a character phoned in for the sake of it, for there’s no real impact coming out of her character to the actual story as she can easily be cut out of the film without any noticeable difference arising.

To say Jason Bourne is disappointing only understates what it presents. Even bringing back Matt Damon to play the title character never gave off the feeling that it was a Bourne film as opposed to just merely a lazy product with Bourne characters. In short, that is the best description to which I can come up with Jason Bourne. What we have here is a story so lazily stitched together that involves the Bourne characters yet never does anything more with them and it’s at this point where they can’t do much at this rate to get me to care once again. And knowing what a filmmaker like Paul Greengrass is capable of when he’s handling these stories, it’s quite clear he ended up stooping down to a low that was so unimaginable for this series. I didn’t expect to feel this way over a Bourne movie of all things, but I only got angrier just as more disappointment with this series was hitting my face knowing what the people behind it were able to establish. It was more a slap in the face than anything, even more so than The Bourne Legacy.