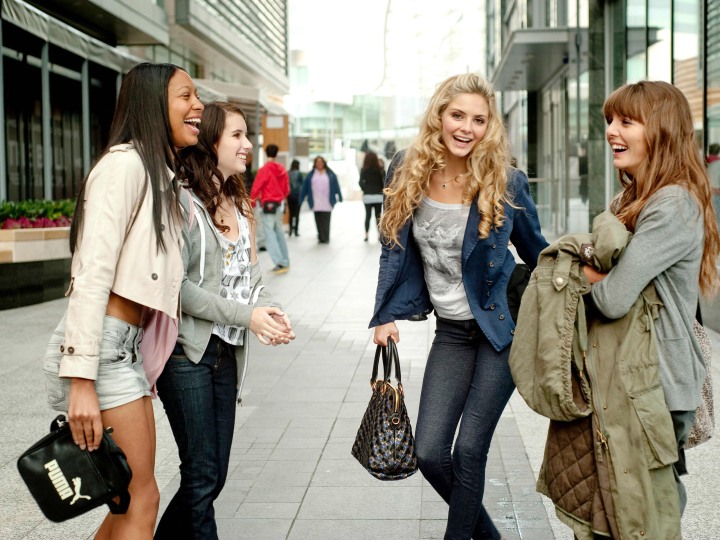 NOTE: My current views on politics have changed so much ever since the election of Donald Trump and thus most of what you would have remembered seeing here will have been altered to match how I feel now.

I think it’s best that I start off this review stating how I feel about feminism. I’m never one to talk about anything political because I know it’s an area that leads to the most fights: for on social media there’s a mindset in some people which we have people being objectively correct in whatever side of the spectrum they’ve landed on, and I’ve lost friends over it. I state this because I like to think of myself as a person who has no political leaning of any sort, because the fights I’ve witnessed made me dislike many aspects of both the left and the right. I’ve started to find myself leaning more towards the left as time passed by, and my understanding of feminism perhaps has led to why I think 4.3.2.1 doesn’t work at all, it’s a misguided piece of filth that otherwise has no idea representing what it believes it does.

Taking a narrative that moves around in a manner akin to Doug Liman’s Go (several different leading characters, rewinding in order to show another character and what they are doing at the same time), 4.3.2.1 tells the story of four 19-year-old girls (three British and one American) as they get themselves involved with crimes of some sort, and that’s really all that can be picked out of its premise. Nothing of any particular worth arises that makes anything even half as compelling as it wishes to be, for events only come by at random only as a convenience to the film’s narrative style and there’s no real sense of connection between all of the four leads because we barely even get any knowledge of them until their stories come by, for all we see of any of the rest are just tidbits of what comes in their own stories.

What caught my eye as one of the most grating aspects of 4.3.2.1 is the relentlessly poor editing. It would already be clear what is coming up for the viewer when you look at the opening sequences, considering the ridiculously high amount of cuts that take place in scenes that are as simple as a conversation and the actions that set everything into place – almost as if it were trying to put Requiem for a Dream to the test. Yet even with the high amount of cuts in Requiem for a Dream, it is still easy to get a grasp of the events that are taking place on the screen and that is the exact opposite of what is happening in 4.3.2.1, though there’s nothing particularly worthy for attention in regards to what the film is trying to excuse as a “story” because there is never a clear idea of what even is going on the whole time. Not bad enough, have terribly shaky camera effects thrown into the mix in order to make everything much more irksome.

Now to go down to what I find to be the most abhorrent aspect to 4.3.2.1, it comes down to the film’s gender politics. What I do like seeing is a film that does empower the female gender, but 4.3.2.1 is a film that thinks it is giving them power by making their beliefs relentlessly hateful. In order to make things much clearer, what we have is a case in which the girls carry a strange hatred towards men, and the film never bothers to provide any explanation for this to the point it becomes unreasonable. If that isn’t bad enough, it is also stunning just how much the film is failing at creating an understanding of feminism from the double standards some characters carry: as there’s suddenly a scenario that has one of these girls now having sex with a man (plus some more of the grating editing), and everything suddenly is fine for her – hypocrisy at some of its finest. It amazed me just how terrible Noel Clarke’s understanding of the female gender is based on the script which he has formed right here. And even more baffling is the gratuitous nature of the sex or lingerie scenes – which also contradict what the film is attempting to stand for.

And the unlikable nature to these characters isn’t all that makes the experience of watching 4.3.2.1 unbearable, but we also have abysmal performances arising from the cast at the exact same time. Nothing from any of the leads ever leaves a mark of any sort, even the most interesting ones of the bunch. Shanika Warren-Markland’s character is one that stands out in particular for just how awful it is, not only from the stupidity of the character whom she plays but also from the obvious lack of effort coming into such a performance. Her story, which was possibly the most tedious turn of events for the whole film, only flashed out many of the most grating things to even come from watching 4.3.2.1, both technically and morally. Emma Roberts, arguably the most interesting of the bunch, is just a baffling presence all around because she does not particularly have so much to work with and also carries very little impact on the supposed story of the film.

Just the very fact that 4.3.2.1 was even made is absolutely baffling to me. It’s a film that misunderstands just about everything that it wishes it is standing for (feminism that in turn resorts to misandry as a means of asserting power) and is just so poorly done just about everywhere else whether it be down to the sense of “connection” or the indulgent stylistic choices which ultimately become distracting. There’s absolutely no point that even is set to come out of 4.3.2.1 at all, as even the most interesting aspects about it feel so baffling with what the film wishes it wants to establish. Morally despicable, messy, and just all-around unappealing in every regard, 4.3.2.1 is a woeful experience that should be avoided at all costs.