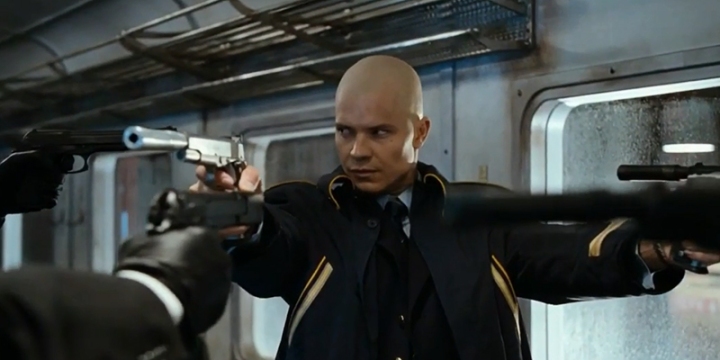 I don’t have any connection with the Hitman video games as I’ve never played them, but relatively low expectations ultimately set the tone for what I were to come out thinking of the film adaptation. But at its worst, there really was nothing particularly offensive to note (I’d only imagine that I can take greater offense if I had any connection with the games) other than just the sheer feeling of emptiness that ran all throughout. Unfortunately, there was also not very much good being left behind at the same time and instead, Hitman just leaves an empty aura all around – one that is soon to fade away from the memory after having viewed the film. I can assume fans of the games would take greater offense to what the film presents but I’m only left with somewhat of an indifferent reaction.

Timothy Olyphant is the barcoded assassin known as Agent 47. He works for The Organization, but one day he ends up getting double-crossed by people whom he trusts and now he’s out for vengeance. It’s an outline that we’ve seen several times before, and all that really can be made of it from just how that sounds is how clichéd and boring it is. If the tad familiar outline weren’t bad enough, terrible writing shines all throughout when one either listens to the dialogue or tries to follow along with the course of events in the film. It is nothing shocking when you come down to the fact it was written by Skip Woods of all screenwriters.

Given as I’ve never had much connection with the Hitman games, I’m only sure that this film never painted a good image based on the reactions that it had received from fans, but there was nothing particularly worthy of interest in the good nor the bad present. All I could pick out of Agent 47 was that he was just a bland caricature carrying on missions because he just does, but there was nothing worthy of grabbing one’s interest all throughout, whether it be an extreme good or an extreme bad. It’s a film that merely exists and bears the name of a video game franchise so beloved by many, but there’s no harm being done as it goes on. An aura of nothingness is merely what fills up all ofHitman, I can’t get terribly angry.

Timothy Olyphant as Agent 47 is boring, but that’s not anything terribly surprising. The whole way through, his performance is so phoned in and it never feels like he is even trying to become the figure whom he is playing, he just feels so bogged down to deliver everything as quickly as possible. Yet that’s how the whole cast feels like. All of it is so noticeably artificial, they just never try to be anything more or less. The final result of such artificiality only ends up adding to nothing more than sheer monotony from start to finish, but strangely it was never something that leapt towards me as anything inherently awful.

Action sequences are extremely mediocre whenever they last, sometimes bogged down by terrible editing or generic choreography – it becomes clear from how everything is staged how disinterested nearly every aspect of the film is from itself. It was from there I thought to myself that something strangely admirable came out, in the sense that it all feels like a film whose production was so rushed because no one could find much good to work with. Almost everything you can pinpoint feels so phoned in, it is hard enough trying to boil everything down to one specific aspect that shows how everything had gone wrong.

There’s nothing remotely harmful present in Hitman, because all it is is a film disinterested in itself for just how unwilling it is to grow out. It came to my surprise that there was a level to which I found it so tolerable, but given as I’ve never played one of the games, that could be one factor – and if I have played them, then I can only imagine a more vitriolic reaction coming out. Though putting everything altogether as it stands, it is a film that merely exists, there’s no reason for it to do so, given how nothing on any extreme is arising. At the very least Timothy Olymphant and Olga Kurylenko have some chemistry, even if they are exactly what the whole film is: phoned in.