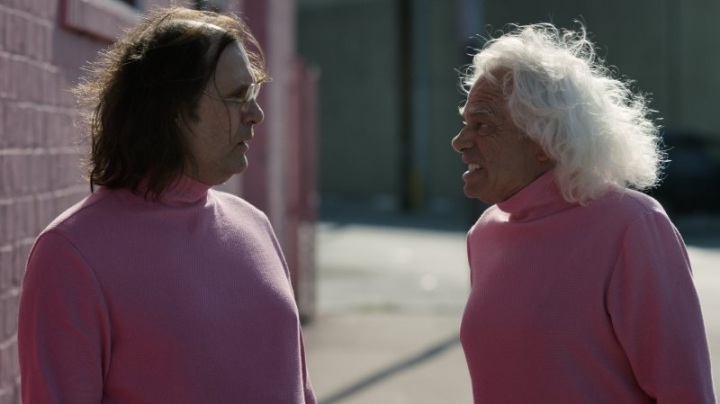 There’s a degree to which I can enjoy stuff that purposely is made to be terrible and then there’s another degree to which I just find that even if that were said goal, the final product is not even any interesting. The Greasy Strangler clearly allows its bad qualities to shine but it never really feels like it presents any reason for myself, the viewer, to even care that it was ironically made to be terrible because watching the film alone was already discomforting enough of an experience. If I were supposed to find this funny, I didn’t laugh, I just had a blank expression, one that stuck put start to finish. But maybe that’s the best way to describe The Greasy Strangler, something with a clear goal set in mind and instead leaving behind a blank canvas.

What I would have suspected out of The Greasy Strangler was that it was calling back to the films of John Waters from its display of bad taste. I’ve respected John Waters even if his films have never always been my cup of tea, but I always had a feeling that they were expressing something with what they display. In the case of The Greasy Strangler, what I’m picking out of it is a story about a father and son who run some sort of a disco tour, and eventually they end up competing for the heart of a woman who ends up taking their own lead. That’s really all it’s even about, but the bigger surprises come there onward.

From the first moments of The Greasy Strangler, there was something I picked out from the fact it chose to display its crassness and instead of laughing, it made the experience all the more discomforting. And if it were the intended effect for it to play upon its viewers, there’s not anything particularly interesting which it does and instead the many attempts at humour that come out from just showing off how crass everything can get on the spot just become all the more off-putting. That’s not to say it takes one out completely because there are some interesting moments which it raises then and there but while it goes on, it never presents anything to make oneself care about what is displayed.

I recognize already that the film is made to look bad, but had The Greasy Strangler even wanted to make a point with the obvious flatness present all throughout whether it be in set design, acting, or writing, I would at least have found myself compelled to sit through its entire running time but instead that is not the case. What happens as a result of the obviously terrible qualities being put on display is that it makes everything, just as noted in the above paragraph, discomforting at most. It’s not enjoyably bad in that manner, but it’s the sort of terrible that only baffles one’s mind in the sense that it only makes the experience all the more of a slog and all that is anticipated soon after is just for the film to end. Had there been anything interesting to comment upon with the design, I’d at least admire what The Greasy Strangler intended but it was never there.

Here’s another part to where I take issue, it would be how all throughout The Greasy Strangler – just nothing comes anywhere. There’s no surprise, no sense of character, or really any sense of story, which is quite possibly its worst crime. Maybe the titular “greasy strangler” itself can be argued as everything that the film has going for it, but the whole running time I was waiting for a sole reason to even care for what ever was going on to come by and I got absolutely none of that. You just have random people yelling at each other over nothing, together with a mishmash of more random events coming by, and somehow it all managed to be enough material for feature length.

I can’t really recommend The Greasy Strangler on any count because there’s a whole lot to which I know it aimed for with the way it was made together with what I’m assuming it is trying to pay its respects for, but none of that manages to raise it from being just absolutely nothing altogether. I guess I can go ahead to say that the “strangler” himself is cool at least with design, but given how he rarely is ever present, you’re stuck with poor attempts at crassness that never amount to anything. There’s funny bad, and then there’s bad to the point it can’t sustain one’s attention: The Greasy Strangler is a part of the latter. It tries far too hard, and it really can glare right at you.

All images via FilmRise.