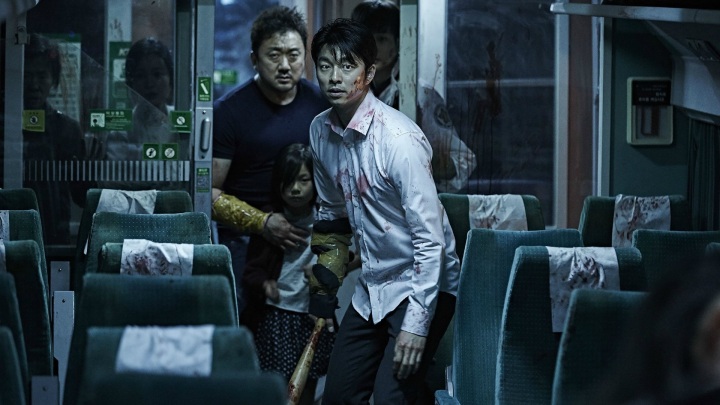 It’s nice to see a zombie film that takes a humanist angle and uses it to the best of its ability, one that unexpectedly took out much more tears from where it moved. Train to Busan, Yeon Sang-ho’s first live-action film shows another side to zombie films that I wish I could find more often, and quite quickly on that note it adds to South Korea’s roll with 2016 releases – for they have been enjoying success more than anything this year in films like The Age of Shadows, The Handmaiden, Right Now, Wrong Then, and The Wailing. Train to Busan comes along the bunch.

Initially the setup comes just like any other zombie film, for we have an outbreak that affects an entire area in South Korea although a small group has remained safe. These people are all boarding the titular “train to Busan,” which reportedly has been noted as safe from the zombie outbreak which has spread. Of all the people whom we keep focus on, we have our eyes on the divorced Seok-Woo and his daughter Su-an, who plan to head to Busan so that they can see her mother as a birthday gift. Plans end up heading a whole other route when a zombie infection ends up spreading throughout the train and the journey to Busan soon becomes a quest for the survival of those who made it safely.

What the film does so perfectly well as a zombie film is where Train to Busan finds itself at its most thrilling. From how it keeps itself confined within a single area in order to rack up the tension, contrasting it with the moments the survivors end up heading into the outside world which is so full of danger, it’s always intriguing to see where Train to Busan wishes to move along with its zombie storyline because there is still a whole lot of energy present in order to keep everything in a constant motion, making all of the tension much more effective right on the spot. It showcases the zombie subgenre of horror at some of the best it has been in years, and while it lasts, it is wonderful.

There’s an interesting humanist angle coming along from the concept that we are watching the survivors recoup from their paranoia about another group, and perhaps this can come off as a detriment on some areas for it can draw too many familiar notes towards Snowpiercer, a common complaint that I’ve seen. When it comes to how we look at the selfishness of one class being ahead of all the others with their refusal to let others in for they still try to fight for their own survival, there’s a note that rings a tad familiar on some counts but it never takes away enough in order to make for something boring. We still care enough about these characters and their stories so that they keep our attention for the whole ride, which is what is most important.

Regardless, there’s still an interesting idea to which it can raise about what will happen to the survivors because of what they have done to keep their own lives during the outbreak. Seok-Woo’s ark is perhaps the most compelling of the bunch, for all he wanted is to keep his daughter safe. It’s nothing particularly new for the horror genre but the amount of emotion that comes from both Gong Woo and Kim Su-an’s performances ultimately makes their arc rewarding – for we recognize in these survivors humanity. With the final sequence coming to mind, that is where Train to Busan hits more moving notes.

Train to Busan is a bit standard but there’s always something interesting coming along at every minute, because of the incredible amount of intelligence that is laced within – making it one of the better zombie films of recent memory. Imagine World War Z had it been inside of a more confined space, but at the same time if it ever had at least twice as much tension as said film did – for that’s the best way to put Train to Busan into words. For the opening half alone, you’ll have what anyone would want out of any zombie film and while there are many notes that ring predictable in its second half, the new angle it attempts to bring in is where it still keeps one’s attention.

All images via Next Entertainment World.