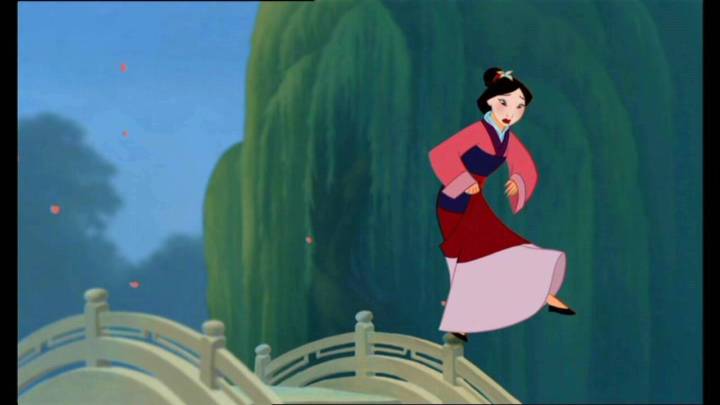 I always felt when watching Disney films taking on female protagonists that would eventually be branded as their “princesses,” something more would always come out in a progressive manner that makes these films among the more interesting of their own output. One would know already of my own love for the arcs of Ariel from The Little Mermaid or Belle from Beauty and the Beast, and then we also have the eponymous Mulan, from Mulan. This was yet another Disney film that I always had a rather fond of when I was a child that I haven’t seen since those years, but to see my own enjoyment of it has never faded away made me smile like always.

Inspired by the story of the historic figure Hua Mulan, a woman who pretended to be a male in order to take the place of her aging father in the army, it was interesting to see where Disney would go from being much more blunt with the progressive nature of their stories whereas hints would have been present within the character arcs of some of their previous protagonists (notably Ariel and Belle in particular). Yet echoing my praises for Lilo & Stitch, I come back towards what more is Mulan open to, and it would be within the willingness to allow more cultures to take the spotlight, for now we have a story based upon a Chinese legend featuring obvious Western influences.

In tune with the progressive nature of Mulan as a protagonist, where Mulan stands apart is how she is not a character who conforms to a sense of authority in comparison to many of Disney’s other princess leads. Belle and Ariel have had their romances within their respective films, but Mulan never feels motivated by such in order to grow into what sort of character she has all throughout – she’s a tomboy and remains intact with that spirit through the film’s running time. During moments in which we note she is pretending to be a male in order to let herself out more, it hints only at what power a figure like her can have over the males whom she is leading into the battle: only showing another level of what makes Mulan as clever as it is.

Just as Disney’s most notable films of their Renaissance era have moved along, they are not complete without the dose of musical numbers and intermittent comic relief. What one can say already for some of the best films of the era, they can apply once again when talking Mulan, most certainly when we are to talk of the musical numbers. It’s easy to admire the obvious Asian influences not only in background but in the style of the animation, for it also manages to create what is one of Disney’s most visually appealing films to have arisen from the era, for the battles could not ever look more beautiful.

There’s another point to which Mulan does have its own shortcomings, though. Eddie Murphy’s comic timing is perfect especially when he plays Mushu, but I’ve never been a fan of how Disney handled comedic timing when telling such tales for at times they feel distracting to the actual story. It was evident within The Little Mermaid during the moments on land, and quite frankly in Mulan it has retained but like the aforementioned film it still provides enough to keep one’s attention. Where Mulan finds itself at more fault, however, is where a number of its supporting characters (primarily the antagonistic Shan Yu) are one-dimensional all throughout. Granted, Shan Yu manages to leave his mark from his appearance alone, but as a villain he still feels rather underwhelming on the inside.

Mulan has held up the many years that I have went without having watched it, although it is still subject to many hiccups along the way. Said hiccups are rather common of Disney’s animated films during their Renaissance era, but the influence in animation style together with callings for the culture being represented as well as a more progressive protagonist in its eponymous character, everything to which Mulan presents makes for an entertaining, thoroughly engaging ride from start to finish. At least to balance out the traditional storytelling, there comes an interesting gender reversal with the princess saving the prince as hinted by the film’s tagline.