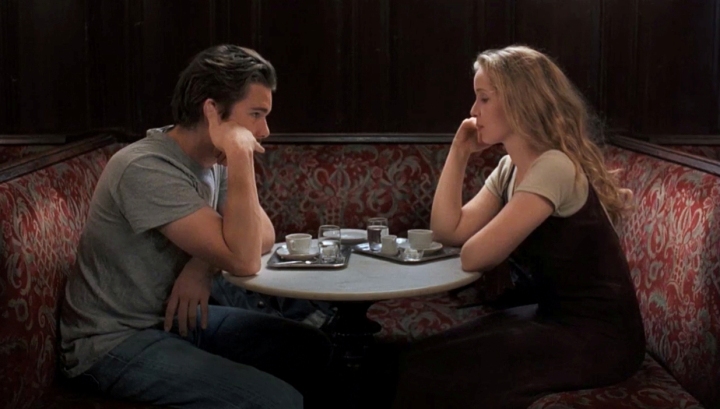 Richard Linklater starts off a new journey inside of his body of work that would soon go on to span through time with the same characters in Before Sunrise. But for as simple as the idea sounds on paper what came out was nothing short of resonant in the best sense and it only calls out for wonder on every seemingly small turn – for it was also what the Texan filmmaker was best at. There’s an incredible understanding coming about on Richard Linklater’s end as for how romance can allow itself to develop and it was all from something that appeared small but that’s the very least of where such an incredible journey has only found its beginning.

Before Sunrise is the first of three films revolving around Jesse and Céline, an American man and a French woman who meet by chance on a train to Vienna and end up spending a single day together. Yet their romance starts and only grows from something as simple as a conversation that took place between the two about a subject that could easily have been passed along – trying to understand another conversation that took place between a couple that was in German. Soon the two just talk the day away as they roam through Vienna but their limited time together is something that still floods their mind.

What only starts off the loveliness inside of Before Sunrise is the fact so little even really seems to happen by appearance but nevertheless it still manages to engage oneself. So much meaning only comes out from what appears as a small conversation to the point that it only develops into something that lasts an entire day and Richard Linklater invites oneself to live within the moment. Soon enough another flashback came to me just as I was watching Jesse and Céline spending their time with one another as they spend time living as themselves rather than as the image whom others would picture them as (Jesse a cynic, Céline a doubtful romantic). A time where I found comfort as I knew it, maybe not in the same style we witnessed but still ever present.

I remember when I had a conversation with a girl I liked back in school. I was going outside of my own introverted self just to talk with her and we have been grouped together on several occasions for we were in the same class at one point. After class that time, I decided to sit together with her at lunch since she was alone and I thought we should start a conversation with one another. Right after school ended that day we walked home together with one another chatting the day away about what we loved most in life and what we wished out of what we had. After that day, we have only passed each other by and rarely seen each other, then I look back at Before Sunrise and I think about how I was essentially living within a single day feeling like Jesse and Céline both – having found another soul that they can share anything with so comfortably.

Yet if there were never anything from that experience that would ever feel at all anything like what Before Sunrise has created, it would also be in how exquisite the scenery is. Linklater has created a story that could happen anywhere at any moment in one’s life, but what’s always so wonderful in Before Sunrise for how it captures the experience of meaningfulness inside of seemingly small moments in life is just how beautiful it looks all around. I always told myself I would visit Europe one day because of how beautiful Vienna had looked in Before Sunrise for the fact it took place just at this moment in this one space was so perfect for it hints at how such coincidences can ever happen at luck – from a happy start when the two meet on the train to their heartbreaking separation.

Before Sunrise is about as wonderful as romances can ever get and only starts off what would easily be seen as Richard Linklater’s most wonderful journey inside of his impeccable career. This slice-of-life aesthetic only fits everything so perfectly for it isn’t so much a romance that we are watching happening in front of our eyes, because so little even is shown aside from the lovely Jesse and Céline walking and talking with one another. It’s a film that calls for one to live within the moment, one that only hit me so much I wish I could relive that experience.

All images via Castle Rock Entertainment.