Oliver Stone’s films have been loud about whatever subjects they wish to carry and in some cases they have been beneficial but me not being a fan of his generally speaking, there’s a level to which they just come off as meaningless shouting. One of the most evident cases of such is Natural Born Killers which quite evidently wants to be something more clever deep down (Quentin Tarantino developed the story) but everything soon enough just goes nowhere. I understand already it’s supposed to play as a satire upon media’s fascination with serial killers but even on that count it never works well enough and instead it takes comfort in an ugly aesthetic. 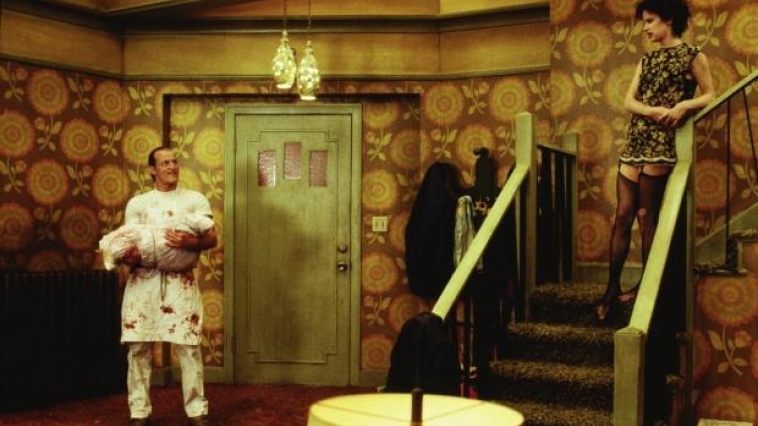 Mickey and Mallory Knox are a loving pair who kill as they please wherever they go, after having been haunted during their own childhoods and now they are the center of attention thanks to the media that surrounds them on every end. It’s clear already what Oliver Stone wishes to satirize in Natural Born Killers, the fact that media has grown such a grand fascination with mass murderers to a point where they almost inspire more unsuspecting people watching their stories unfold. Where it certainly is an admirable goal it’s also an incredibly tricky one to pull off and Natural Born Killers doesn’t succeed, rather instead it succumbs to what it wishes to satirize and glorifies the lifestyle the Knox pair is living.

It’s worth noting that Quentin Tarantino had originally developed the idea before Oliver Stone drastically changed up the material after the film landed in his own hands and turned everything into something so obnoxious and rather flat out irritating. It’s only fitting that the film is watched from the perspective of the media that is placing these figures into their own spotlight for Natural Born Killers stylizes everything that they do to the maximum and makes for something all the more unpleasant. Perhaps it can’t be something that should bother me too much knowing the subject that Stone is carrying but in part it also becomes a big part of the problem with Natural Born Killers.

Stone isn’t really so much satirizing the lifestyle of these killers as he is glorifying them by living within their image. I would at least be able to appreciate the style more had Stone intended to condemn how fascinated we are with such people but it never seemed to be like the case here because the mannerisms to what made Mickey and Mallory Knox the deplorable couple that they are almost seems in a way it wants us to sympathize with them and find what they’re doing to be a cool thing. On that count, however, I only find it is easy for myself to object to it because the appearance just comes off as ugly and rubs me only on a count of poor taste. It didn’t help I found Mickey and Mallory both to be insufferable presences rather than compelling ones all throughout.

What’s worth noting, once again, is that this film comes from a script that was originally done by Quentin Tarantino and instead it was drastically changed at the hands of Oliver Stone to his dismay. Had Quentin Tarantino actually done this, what could only be imagined is something that would at least carry a sense of charm because his dialogue is still just as appealing as ever but everything else only feels as if it is terribly wasted at the hands of an irritating aesthetic together with tidbits that only ring more in the film’s excess with bad taste in the glory of its two lead characters. For as much energy as Woody Harrelson and Juliette Lewis can bring along they can’t change how annoying their characters turned out being with the main highlight being Tommy Lee Jones as a sadistic prison warden and Rodney Dangerfield as a demented version of his comedic persona as Mallory’s father.

Natural Born Killers is a film that revels in the glory of bad taste altogether. There’s an appeal that such a film is set to contain that I can understand to one extent but in my eyes, rather than appealing it only came off as irritating and unpleasant. Being a fan of Quentin Tarantino his dialogue is the greatest asset but it’s a shame that Mickey and Mallory Knox are both aggravating presences that add more to an equally irritating aesthetic. There was material here that could easily have formed a great satire, but as it stands it’s so heavily misguided and shows the very worst of Oliver Stone’s tendencies. If Quentin Tarantino went behind the camera I could only imagine something in better taste could come about since Natural Born Killers is proof of what happens when one fails simply at capturing the charm of Tarantino’s work and instead comes off merely as an imitator.