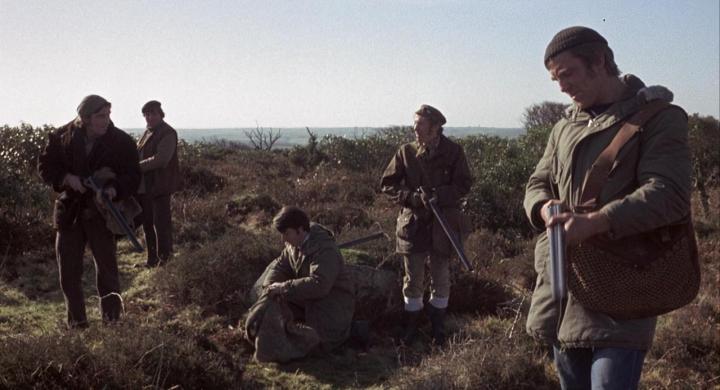 The first time I saw Straw Dogs, I was unsure what to expect given as the only Sam Peckinpah film that I had seen prior was his most famous, The Wild Bunch. I was always cautious with the notion of its infamous rape scene especially inside of a year where more violent films were being put on the radar whether it be Stanley Kubrick’s A Clockwork Orange or William Friedkin’s The French Connection and that first viewing left me feeling no sort of urge to revisit the film. But going through Sam Peckinpah had gotten me to thinking that maybe there was something even greater at the hands of Straw Dogs which made for only one of the most riveting experiences I’ve ever had watching a film – and if that was the intent, I can only say that Sam Peckinpah has succeeded, but it won’t be for all sensibilities.

Dustin Hoffman, a face made recognizable at the time for his roles in The Graduate and Midnight Cowboy, plays the American David Sumner. He’s a man who abhors violence and only wants to live a peaceful life, together with his British wife, Amy. The two of them stay at Amy’s hometown in rural England expecting to find the sort of peace that they long for as they live together, but as their new home is being built, they find that they have only become victims – they have become subject to harassment from the locals. Adapted from Gordon Williams’s novel The Siege of Trench’s Farm, the brutality of Peckinpah’s style will not find itself for everyone’s tastes but for the most dedicated fans of the director’s work, Straw Dogs will be a walk in the park. Every technique he masters in Straw Dogs has only resulted in what would become one of the most unsettling films of its own era, it would already be hard to imagine the sort of uproar that it caused back then.

Williams denounced the film adaptation for the liberties that Peckinpah had taken with his story, but somehow these changes have managed to prove themselves useful – as in its presentation it feels like anger is emoted from every action and employed in order to create this unflinchingly brutal reality that he immerses himself within. Those who have only found themselves familiar with Sam Peckinpah as a result of The Wild Bunch will not find a film of similar sorts in Straw Dogs but if there was something that Peckinpah had mastered more than any other filmmaker back in the day, it would be in how his usage of violence is vital to the opening of another layer of subtext the film presents. In The Wild Bunch, what we are offered is a commentary about generations as they take their own place over an elder group, who are only witnessing the damage of the wild nature of the new. In Straw Dogs, we have a couple who have committed themselves to peace only to have found this sense of serenity has been destroyed.

As the film slowly builds its way under one’s skin, what stands out about the experience is how Sam Peckinpah distorts perception of new land in order to expose something more about the nature of his characters. David Sumner is a mathematician who abhors violence, and wanting to move away from all the noise created by the Vietnam War in America, he moves together with his wife in her hometown in England. He imagines peace and harmony from images that the population of England would present, but even this peace finds itself discomforting in Straw Dogs. The desire for peace in Dustin Hoffman’s David Sumner already presents an unsettling character as his wife Amy, who is characterized as naive and the key to David’s happiness. Just as Dustin Hoffman’s performance ranks as one of his most unsettling, Susan George’s performance as the ambiguous Amy is one for the ages and given her character’s history in the village, it foreshadows what would find itself to be of great use in the effectiveness of Peckinpah’s commentary and ultimately finds a profundity as one of the most riveting films to have been made inside of its era.

What Sam Peckinpah has managed to succeed with grace, is how he retains this brutality even through moments that appear to be calm in nature. But to discuss the film’s notorious rape scene will already be one of the most complicated of tasks because there’s a goal that it has already set in mind and given the way it is filmed and edited, together with the ambiguity of Amy herself, it only makes for one of the most unsettling sequences ever filmed. In this sequence we recognize the nature of the supposedly peaceful as it falls upon itself after trauma, but Peckinpah doesn’t cut back. And even more unsettling is a note so little happens as Peckinpah only builds up to the violent climax, typical of his own tendencies. But this climax only made clear to me that Peckinpah wasn’t punishing only those who have disturbed the sense of peace that his protagonists have desired, but there’s a critique upon authoritarianism that is seeping through the most visceral sequences in the film, coming from Hoffman’s character, whose priority was property over rational thinking.

Straw Dogs is not going to be a film for everyone’s tastes but I’ve only come to appreciate it greatly as time has passed by and sporadic rewatches have taken place after growing familiar with Peckinpah’s work. The viciousness of Sam Peckinpah’s work is not something that would be found so often nowadays, but unlike what one would recognize out of The Wild Bunch, the most unnerving moments critical to the success of Straw Dogs are felt rather than shown. Even in the less graphic sequences, Straw Dogs still manages to create an extremely harrowing ride because it has found itself achieving greater success as it builds up an environment made to feel so much like it can be an ordinary villa. The craftsmanship of Straw Dogs is incredible in itself, but the fact that it is as violent as one would expect of Peckinpah isn’t where it has remained so riveting over the years. Rather instead, it would be in the fact that it is so evidently dubious without compromise on just about all count, to work its way into one’s skin.