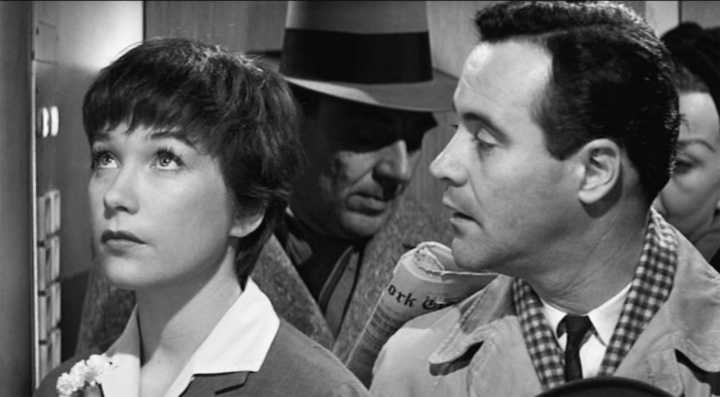 I’m an especially reclusive person. I don’t even know if I’ve ever managed to have a social life the way I wanted because, to say the least, I’ve lived my life as a hermit. I think this is a fairly known fact about me, and it isn’t surprising about the sort of person that I am, I’ve been living a lonely person. I’ve never been a particularly good communicator. I’m already nearing my 19th birthday as I’m writing this and I’m only getting unhappier about it by the minute because I’m about to start college later this year and I don’t even know if I’m ready for it. To say the least, if any other film ever managed to get down to the bone of what that experience was like for myself, Billy Wilder’s The Apartment has always been a perfect go-to. On one end, we see the comedies that remind us of the happiness of our lives, and what it looks like on a shallow surface. But what’s made The Apartment the pinnacle of Billy Wilder’s directorial career goes beyond what it looks like, because it’s already left me a mess thinking about how I live my own life.

Jack Lemmon plays C. C. Baxter, an average Joe working in New York City. In order to climb up to a better position at his own job, he decides to lend out his apartment to his own co-workers at the cost he will also clean out their messes afterwards. But because of what he’s doing, he’s already making it clear that he’s a victim. His co-workers see him as a sociable person because of what he does for them, and yet he’s the exact opposite, he’s just a lonely file clerk sucked into the competitive nature of the corporate world. His co-workers are oblivious to how much he is suffering from their own benefit, but Baxter stays loyal to his own superiors. And quickly enough, more guilt is found upon him after what he knows he’s been turned into, and everything becomes even more complicated as he develops a romance with the elevator operator Fran Kubelik, as played by Shirley MacLaine.

This plot is a simple enough one, but I keep looking at myself under the light of C. C. Baxter as I reflect upon memories of my own high school years as one who would only be sticking around, aiding my own peers when I know they need it, and yet I rarely ever connected properly with them all my life. Maybe it was the fact my social anxiety had gotten in the way, because I know I have a tendency to overthink what more is set to come upon every possible option. I was always shy about the fact I had autism, and in opportunities where I wish to find myself able to connect with an environment that’s so obviously using me, I can’t. I can’t ever find myself able to reach out because I’m afraid of hearing what people think about me. I’m afraid because I know I can’t be “normal” for the sake of talking with others up close if I have another set goal on my mind, just trying to pass so that I can graduate high school.

It’s the sort of thoughtfulness that Billy Wilder has for a character like C. C. Baxter in light of all the cynicism of his usual work that comes to play, and builds up to why I believe The Apartment is undoubtedly his best work as a director. For as much as he’s playing the whole scenario for laughs, Wilder is also getting the very best out of Jack Lemmon as he plays C. C. Baxter as a man who is broken by the corporate world he lives within, consuming his thoughts with that of greed in the hopes that he can find a better sense of peace. It’s clear that Wilder is mocking this sort of characteristic in oneself and again, it’s almost like a moment for us to look back at what we’ve done just because we feel that what we have isn’t good enough for us. We have also found that we even put a risk to our ability to communicate properly because of the way we are living and our inability to change away, because oftentimes we’re afraid to (I know I was, and it pains me greatly). In Lemmon’s broken performance as Baxter, Wilder condemns the competitive nature of such an environment – as made clear with the bleak black-and-white photography, which still looks beautiful to this day.

Fran Kubelik’s purpose in The Apartment is clear enough, because the competitive nature of the corporate world has only put a rotten thought into Baxter’s mind. He starts a romance with Kubelik, and he wants to search for a way to impress her. He takes her to see The Music Man live. He earns her feelings, but she doesn’t know who she really is just yet. But Baxter quickly finds out that she’s a broken soul the way that she is, and in his sincerity and ambition he wants to provide the best for her. He can’t. He can’t because of his own lack of experience with proper communication after everything has been lost inside of corporate garble. I was once suicidal, and yet I have trouble with helping out my own friends who suffer depression of their own. I find myself struggling because oftentimes I just don’t know how to give advice. I don’t know how to be there for someone when they most need me. This is the sort of person that I am at less than 24 hours before I turn 19 years old, one who struggles with helping others at the cost of competing for the top to impress people anywhere I go. It was clear in this pain of not knowing is what allows The Apartment to resonate.

The whole idea behind The Apartment was that it had been played and shown to us as a comedy, and yet the fact we’re watching broken people coming together is where it doesn’t feel like such anymore. But it’s like a mirror of our own lives with the fact that The Apartment has suddenly turned darker, with the occasional comedy to remind us of our happiness. We aren’t ourselves anymore, we’re just faces in the crowd that are set to be lost in time because that’s what trying too hard ends up doing to us. My life is already boring enough, and I used to be able to write more frequently, and yet I almost feel unable to do so because I try to keep a rhythm and flow noticeable. I’ve lost friends trying to compete for the top at what it is that I’m doing. I’m not even myself anymore. I’m just going to remain forever lonely because of how I keep doing myself, which is my greatest fear and I have a feeling that it’s already come true. But it’s this optimism I find from The Apartmentthat convinces me to try and leave everything behind. And it’s somewhere I still find myself struggling.

Everything comes to a close on what appears to be an optimistic note, and yet I’m not even sure. Everything has ended with every foundation coming to a crumble. I know that I’m supposed to be happy because of that final image, and yet I feel broken too, like Lemmon and MacLaine have become as the film had progressed. But perhaps we needed that small note of happiness to try and forget everything saddening that has came beforehand, and suddenly it all comes to me as what truly is the perfect ending for such a story. It’s the perfect ending because we know we want to put everything behind in some way or another. It’s the perfect ending because we realize how simple it is just to set up the building blocks properly again. It was only as simple as a “shut up and deal.” It was another foundation ready to be built once again. And maybe that’s what I need a reminder for, and I don’t know how to find it. Because maybe there’s another chance for me to break free, and I just need to get ready. And again, I don’t even know if I am.

2 thoughts on “The Apartment – Review”