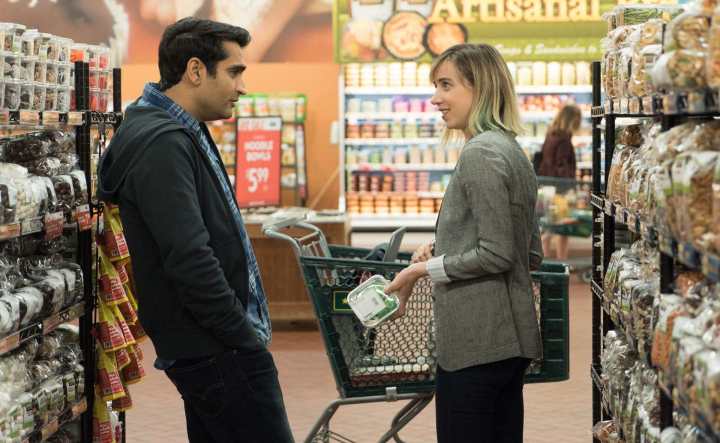 I’m not even sure why this movie needed to be two hours long, that’s just one thing on my mind the moment I finished The Big Sick. On the other hand, knowing how personal of a tale this was for Kumail Nanjiani to tell, I already knew that I was in for something sweet. As expected of a Sundance drama it’d be rather cutesy (perhaps maybe a bit too much), but I was ultimately won over despite the occasional qualm. What could already make itself out to be any other conventional romantic comedy proves to be something sweeter and incredibly thoughtful, maybe that was all it needed to be in order to hit every mark in which it does with ease.

Kumail Nanjiani plays himself as he tells the story of his own romance with his wife Emily V. Gordon (named Emily Gardner in the film and played by Zoe Kazan), who co-wrote the film together with him. The film tells the story of how the two have come together in real life, but not without a cultural clash between Nanjiani’s own family and Gardner suddenly falling ill, leading him to connect more with her parents as she is recovering. It seems to be assembled like a basic romantic comedy from the familial connections and feuds, together with the cutesy image of its two leads, and yet there’s a personal touch that allows The Big Sick to have enough heart to win one over.

The film is too long, as expected of a Judd Apatow production. Perhaps a 100 minute running time would suit this story far better and seamlessly, but there’s also an extent to which I feel certain scenes can be trimmed down in order to improve the pacing of The Big Sick. And it’s not to point directly at a scene that can be completely removed in order to allow The Big Sickto have much more slick pacing, but it’s the fact Michael Showalter seems to carry a tendency to hold onto a scene for much longer than one could want and it becomes easier to doze off. It’s typical for a Judd Apatow production to fall into these cracks, but at their best they carry enough heart in order to keep oneself watching all throughout.

Despite my own qualms with the film’s length, I still found the film funny enough thanks to Nanjiani and Gordon’s script. Because Kumail’s stand-up comedy as shown in here is one that reflects upon how he sees everything from his own perspective and The Big Sick details his own search for true love as opposed to the “arranged marriage” of his own culture, where to him, it doesn’t seem natural. But that’s the beauty of The Big Sick, the fact it makes interactions between its characters seem natural to their setting and environment, thus creating a lovely pairing between Nanjiani and Kazan, and even bringing out more touching moments between him and her own family as played by Ray Romano and Holly Hunter. From the comedy alone, we still get a glimpse at what would grow to become moving.

Although Zoe Kazan’s screen time is limited her presence is still felt well enough during her own illness and it’s what allows The Big Sick to set its own heart in place, for as much as it also happens to be a trope that seems a tad familiar. Kazan as Emily Gardner doesn’t need to take up every scene in order to leave an impact, but it’s the notion that Kumail Nanjiani has found a sense of happiness within his life after she had entered his own that allows their bond to feel genuine. For it was felt within interactions between Kumail and Gardner’s parents he cared greatly about her, and thus the film grows even more touching upon the thoughtfulness that came along. And perhaps cute can be one word to describe it, but the manner to which it plays out goes beyond that, it’s a love letter and a sweet one at that.

It isn’t just the charm that Kumail Nanjiani presents in The Big Sick that allows it to work, it’s how he blends his own brand of comedy into the game in order to allow the viewers to get a grasp on how he sees everything in his life to be. It’s the fact that Kumail Nanjiani uses his own comedy in order to show people up front how personal a story like that being told in The Big Sick is for someone like him. And while he was great as his own self in the film, it’s hard not to love Ray Romano’s return to the spotlight or Holly Hunter in general. With all of these great performances coming along the way, The Big Sick isn’t a romantic comedy free of convention but it has enough heart to make it worth a watch.