This whole experience almost feels like having walked through an art gallery, trying to deconstruct art that we observe – for we still listen to someone explaining the context. Raúl Ruiz’s The Hypothesis of the Stolen Painting is an experience to say the least, but it’s the question that it brings to what we see in the art medium that ultimately defines what we are to estimate out of life in the very end. Maybe that was the mystery that was being posed through The Hypothesis of the Stolen Painting, because it’s a film that begs us the question about what it is that we truly call “art” for are we being deceived into thinking something may fall under such category, or maybe not. I’m not even sure how exactly did Raúl Ruiz form anything like this because the only thing that was on my mind after this hour-long art gallery trip had ended was how he managed to conceptualize something like this in his head. 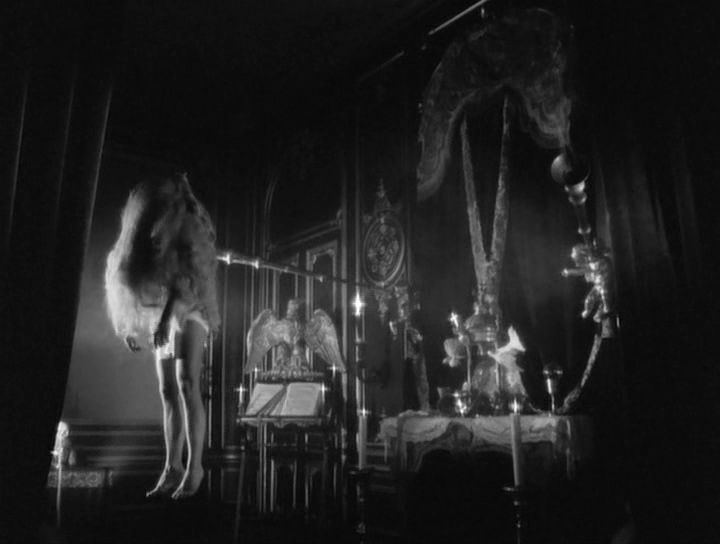 What exactly does story matter to a film like The Hypothesis of the Stolen Painting? We have two people talking, one of which we do see and another whom is invisible to our own eyes. The one whom we see walks through recreations of these paintings in order to truly deconstruct what it is that they mean, and why they carry their own significance. The outline is where I’m most fascinated with what Ruiz has formed here, because it’s a film talking about art’s own meaning, therefore what we’re watching is art commenting on itself. Our eyes show us explicit detail, yet implicit details are what come to our own mind when we allow our own mind to observe more. The moment we start walking through an art gallery and we gaze at a painting, we like to think about what it is an artist intended with the image we are seeing, and that’s the experience of watching The Hypothesis of the Stolen Painting, an hour-long trip to an art gallery.

The way we look at art is defined by what we’re perceiving of implicit details beyond the explicit, for it’s what Ruiz is putting right on the surface in this scenario. Ruiz is reconstructing art in such a manner that he’s trying to make explicit what is made implicit from the surface, and as we hear narrators offering their own perspectives we have already found ourselves coming to what may possibly be a greater understanding of what more a piece of art can mean. But maybe it could be the fact that he has created something so overtly interpretative that it all feels more like weaving through a dream, and it forms the film into a mystery thriller – because we know there is something scandalous coming behind the art that happens to be right in front of us. And all this is being told within the same interpretative mindset with observing artwork and trying to decipher its own meanings.

But if that isn’t impressive enough, the cinematography is dreamlike, for it was shot by none other than Sacha Vierny – the brilliant mind behind the dreamlike Last Year at Marienbad. But director Raúl Ruiz perhaps may have used Vierny’s imagery in order to maneuver through the artwork the same way that Alain Resnais would through a corridor. But that’s where one can call for a psychoanalytical case study, because Last Year at Marienbad is a film about memory coming back to oneself and The Hypothesis of the Stolen Painting is about how one obsesses over what may appear small for some to find greater value speaking to the self. It’s the fact that Sacha Vierny is creating something so inviting for the viewers so that it suits what Ruiz was creating in the first place, because the camera floats around these reconstructions in order to recreate the mind of the obsessed, thus giving the film a dreamlike and hypnotic appearance.

Yet who exactly are these people, and is the painting really a “stolen” one at that? That’s perhaps the greatest mystery that Ruiz never answers here, for as we walk through art it seems more like a collector being interviewed by another mind who is fascinated with the subject. But because Ruiz isn’t playing by the rules here, what I find to be most impressive about how it’s directed is present within what Ruiz is expecting us as viewers to find within art that we know. This isn’t so much a film that is carried by a plot, nor is it a film carried by its own characters – it wanders around an art gallery like any human being would, but from an obsessive perspective that’s so entirely closed in on what seems to be a two-dimensional image for another set of eyes. But when we think about the painting being a “stolen” one at that, we ask ourselves about the link between said aspect and the painting’s own hypothesis.

And hypothetically, there is no solution. Everything has come right before our eyes and has entered our minds. I’m not even sure how Raúl Ruiz managed to form a film like this, but at the same time I’m glad it exists for it also furthered my own appreciation for art as a whole. Because what we are witnessing here is a piece of self-reflexive cinema, that goes beyond the subject of its own title – as a matter of fact because of how it goes about with deconstructing the artwork of its own title, perhaps it could even be a commentary on our own obsession with any medium and trying to get down to the bone of why they speak so much to us. That’s the greatest mystery that The Hypothesis of the Stolen Painting is leaving behind, it isn’t just an art gallery trip – it’s a film that invites us to see art the way its narrators are, so that we can also try to find director Raúl Ruiz’s very own hypothesis.