Actually not too bad considering where else it could have gone. Martin Campbell’s career has never always been the most consistent but when he’s at his best he can assuredly create an exciting action scene (among many reasons his Bond films are among the best of the bunch). At his worst, however, he seems to have no control over what he wishes to tell (The Legend of Zorro, Green Lantern). With that having been said, it’s also fitting enough to say that Jackie Chan is always a delight to watch in the action genre when the film gives him enough room to work with – leaving part of me to hope that this would be a chance for the better side of Martin Campbell to show itself once again. To some extent, it was worth it for The Foreigner proved itself to be much better than it had much capacity to be – even if its more lackluster elements still are noticeable. 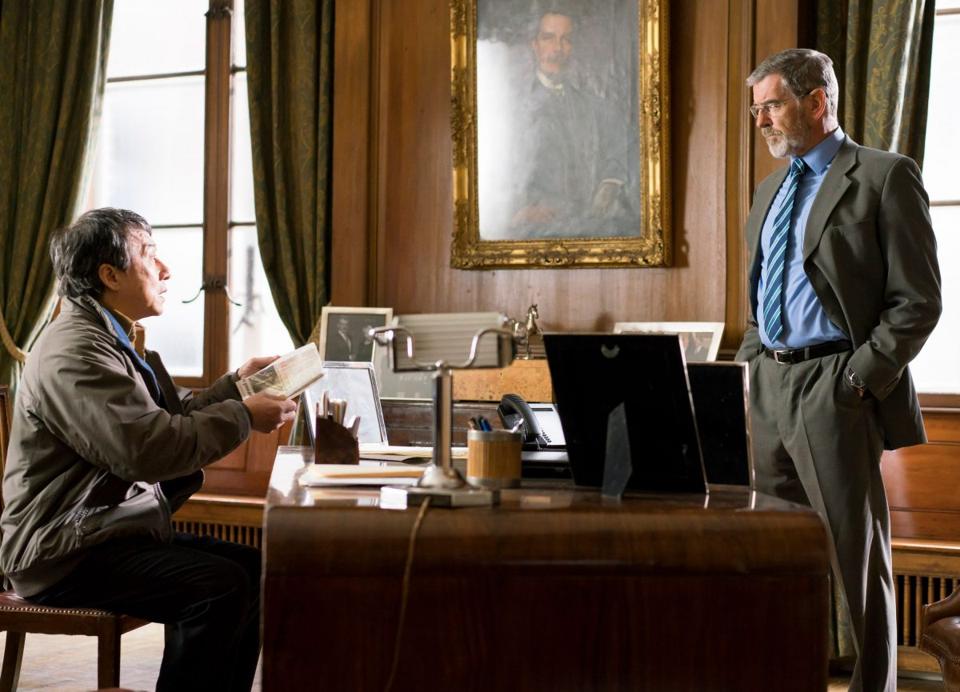 Jackie Chan stars as Ngoc Minh Quan, a Vietnam War veteran living in London as a Chinese restaurant owner putting his past behind him up until the moment his daughter dies in a politically motivated terrorist attack. After her own death, he swears revenge on the murderers and even pursues a government official who may have connections with the bombers. Perhaps the story itself isn’t the strongest suit of The Foreigner because of the rather predictable plot threads that come and go, but even the film’s weaknesses seem overshadowed by moments of ingenuity that don’t seem expected for the sort of film it would be. Maybe not always as suspenseful as it seems built up to be, but for what it is, entertaining enough it retains.

Campbell’s knack for creating an action sequence is present, but it seems as if this is where Jackie Chan’s best moments on the screen come about rather than humanity behind his own tragic backstory – which we see in glimpses and only feels rushed at that. They’re moments that feel like they could have created more impact had they been expanded upon, but they disappear along with Chan’s presence for a good amount of the second half where he just feels relegated towards one area the whole time. Nevertheless, when he comes on the screen he does deliver a thrilling action sequence one after another: only showing that Jackie Chan hasn’t lost what made him the wonderful action star he had been recognized as over the years. It’s a good use of his own talent if anything else could be said, even if we know he still can manage to provide better.

There’s no secret present that The Foreigner is a politically motivated film, now with the government official being surrounded at his own ends with acts of terrorism ultimately becoming his own responsibility – now set to be taken down by an Asian, an older woman, and a black police officer. When the novel was written, it was a plausible enough premise because of what was going on in the United Kingdom at the time, so perhaps in response to how America is running its own government it would only make clear that The Foreigner seems angry and calls like a warning – if the development of Brosnan’s character arc says enough, from his own rise and fall as his own history as a former IRA member catches up behind him.

It’s a tad troubling though when The Foreigner seems to have no idea about how to set the tone of its own societal commentary. For the most part it seems bent towards forming vicious action scene after another, almost in a campy nature at that – especially with where Jackie Chan’s character has been reduced to in the second half of the film (Quan seems absent in the strangest sense considering he is the film’s leading force). It isn’t the same campiness that ultimately has rendered the commentary of a work like Starship Troopers even stronger, but one that only seems distracting in some sense just when trying to piece together what The Foreigner wishes to say. It can’t establish a tone that gives itself a new identity, but the occasional bits of brilliance make it more enjoyable.

Even if the tone of what I wrote prior seems rather negative, I can still say with ease that I enjoyed The Foreigner on the count that seeing Jackie Chan doing what he does best as an action star once again was truly satisfying. Martin Campbell’s skills as an action director do make themselves clear again, but his own faults as a storyteller are present. Nevertheless, it’s nice to see how The Foreigner manages to tie in with the current political climate especially in its anger towards government officials – maybe it isn’t the most subtle but it makes for a good way to pass time.