“Man on the Moon” has always been one of my favourite songs from R.E.M.’s Automatic for the People, because it was as beautiful a tribute to Andy Kaufman as one can create. It was only fitting that when Milos Forman were to direct a film based on Kaufman’s life, he wouldn’t only take the title from the R.E.M. song but he’d also have them score the film. And to play Andy Kaufman himself, he’d cast a comedic actor who’s already odd in his own ways, Jim Carrey. But as I’ve never known so much about Andy Kaufman prior to watching Man on the Moon for my first time as a younger kid who would look up to Jim Carrey’s comic persona, only to find myself appreciating the man all the more after looking into his performances and my appreciation for Man on the Moon had only grown stronger. And it still remains a side to Jim Carrey that I wish was more common. 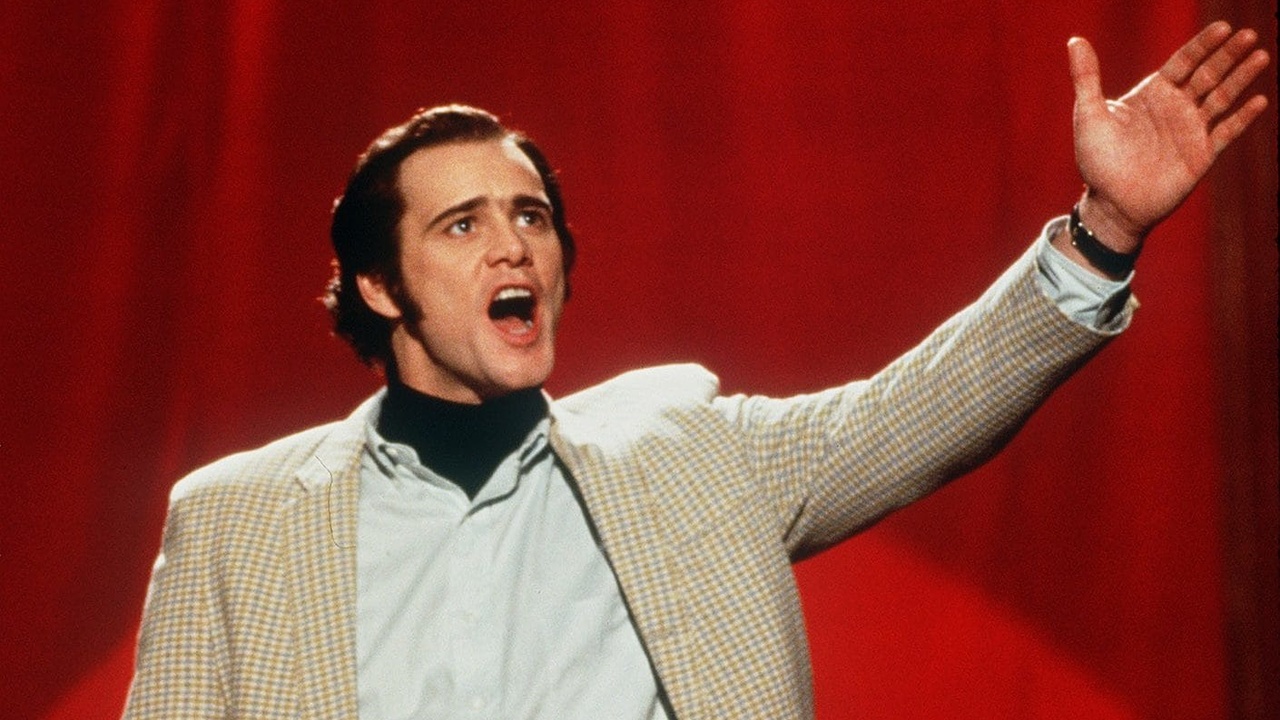 Andy Kaufman was a unique comedian who was no stranger to criticism for his avant-garde acts. In Milos Forman’s film, he is played by Jim Carrey, and this film traces his own steps into stardom from performing at comedy clubs to the creations of his most notable roles as Latka Gravis on the sitcom Taxi as well as Tony Clifton. But at the same time, we also got a look into how his personality had turned him into such a polarizing figure, whether it be within his tumultuous relationships with other co-stars as well as his own professional wrestler act. It’s hard to pinpoint a figure like Andy Kaufman down, but he was nevertheless a fascinating one to watch and to read about. But Man on the Moon isn’t so much a film that lives within the shadow of his legacy. We were watching the heart and soul of what Andy Kaufman had thrived upon his whole life.

Forman isn’t trying to change one’s opinion of Andy Kaufman whether they had already loved him or disparaged his methods. Forman is showing Kaufman as a troubled individual, yet it was the absurdity of his persona that always had made his routines so fascinating to watch. But behind a unique mind we also saw that he wasn’t always the most sane, because Kaufman’s methods bordered towards lunacy whether it be in the public or his private life. Because Kaufman wasn’t a man who sought immediately to make people laugh through his own routines, and the complicated paradox of his own psychology was what always had made him a fascinating figure. He angered people in the same way that Lenny Bruce had done so, but nevertheless his impact could still be felt. It’s built around Kaufman and the impact that he created, on the positive and negative – creating another world inside of itself.

It doesn’t always work, though. The fact that Forman has made his viewers completely aware that he’s made a biopic, especially from the intro, only becomes rather jarring. It’s a tad jarring when the film still feels as if it is structured just like a conventional biopic. Because the fact that Forman was making a film about Kaufman could easily have called for an experiment that could even be as zany as the man himself to get a better taste of what he was like. Among more cases of underdevelopment present, I do wish I got to see more of how Kaufman’s relationships with his Taxi co-stars had gone after he went on to establish a career for himself. There comes a lot of promise because of how R.E.M. were invited to score the film, after a fittingly weird and lovely tribute, and for as beautiful as their score is, it’s a shame the film doesn’t live up to what they had already created.

Nevertheless, as I stated in an above paragraph, this is a side to Jim Carrey that I wish we can get to see more. I enjoy his comedic schtick in the right role perfectly fine enough, but in a dramatic role he always shows a much more subdued side to himself, and his performance as Andy Kaufman is nothing less than extraordinary. It was a performance to define the era, just in the same manner that Carrey had already given a career best in The Truman Show the previous year. But this also is a perfect role for Jim Carrey based on his own comedic shtick, because it allows himself to show audiences that have grown around what they have best known him for a wholly other person behind a man who knew he was going to make people laugh. But when I was younger I had always looked up to Carrey’s antics and watching him here caught me in the sense that I wasn’t purely watching Carrey anymore. And today, watching Carrey here still retains that impact.

Perhaps it wasn’t as life-changing to me anymore because I’ve grown out of certain aspects of Carrey’s comedic persona, yet his own dramatic roles have still stuck with me because of what he manages to show his viewers behind such characters. And to play a figure like Andy Kaufman in Man on the Moon, there was no better choice than Carrey himself. It’s the perfect Andy Kaufman biopic because it still is built within a paradox, yet it isn’t one that always works. At its funniest, we see a zany comedian being himself and showing the world something unique. At its most best, Milos Forman has managed to create a moving biopic with excellent performances all across the board. At its worst, it still feels quite like a conventional biopic. But it still mixes in enough weird in order to make it a perfect representation of what Kaufman had been like. One doesn’t need to be a fan of Kaufman to appreciate the look at his life we are presented here, they just need to know the name.

All images via Universal Pictures.