Godard at arguably his most politically aggressive during his earlier years, but at the same time he’s showing how he doesn’t even care what the audience is making from the images they are being given. But perhaps what makes Weekend such an intriguing watch is the notion that it has become so radical to the point it obscured its own message, yet never was I bored watching whatever Godard wanted to convey from the first scene to the last. But on a mere conventional standpoint Weekend could be the story for a comedy, and yet everything is revealed almost like a horror film – because everything comes by at such a baffling rate and it’s only where it only shows how wonderful Godard is. 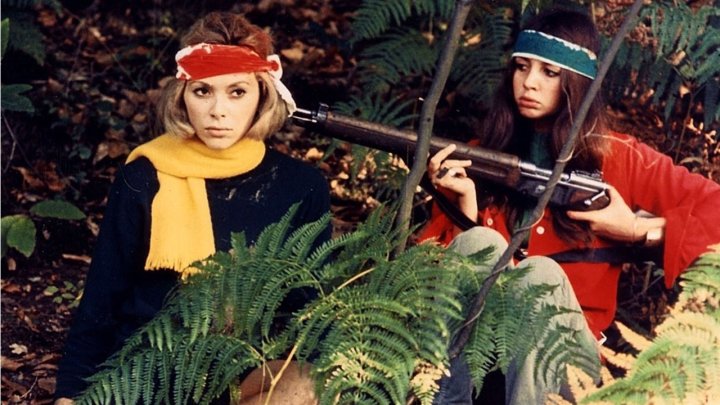 There isn’t so much a story to Weekend but the very idea it conveys pertains to the European bourgeois lifestyle, something which Godard has made evident his dislike for, and in front of our eyes what we are witnessing is its own downfall. It all starts off as a planned weekend trip to the countryside and eventually is becomes a nightmare, starting off with a traffic jam, a murder plot, and cannibalism. Along the way, they also wander through a series of vignettes that pertain to class struggle while also encountering many famous historical figures that go from Louis Antoine de Saint-Just and Emily Brontë, and quickly enough the absurdity of Godard’s own experiment begins to flash in front of one’s own eyes.

It can only be safely said from Weekend that Godard greatly despises cinematic convention. When one watches a Godard film, they can already tell that they’re watching a Godard film and Weekend is perhaps where he has come to terms with how radical of an experimenter he is. Godard takes a camera and weaves it through a series of moments that are all connected by a part of society that he despises, because he isn’t interested in telling his viewers a story that moves from one point to another. He already has an entire world planned out inside of his head based on what he sees and he makes the audience see that vision crumble apart, in bizarre and often hilarious ways – often playing like a violent contrast against expectations from class norms, making clear the anger.

But as for how Godard is clearly open with his own disdain for cinematic convention, the hints are only present from the sort of “narrative” that Weekend carries. It isn’t one that conforms to the traditional narrative, because Godard didn’t make Weekend as a means of telling a story. It’s a film that thrives upon chaos, whether it be the cannibalism or the absurdity that ensues after a traffic jam, but on the inside you can already see Godard just laughing at what the bourgeois is bringing upon itself. He brings two differing classes to clash with one another because we know the higher class would not want to be caught dead with a working class man. Weekend is a film that revels in the chaos inspired by the lack of ability to comprehend what goes on, reflecting human nature.

And quickly enough this chaos makes Weekend almost build itself up like a horror film would. It’s a terrifying film in the sense that the anger that Godard pushes against the upper class society and he starts going on long tangents that reflect the brokenness being inspired. But it all started from the traffic jam, which we recognize as an unflattering image, quickly for our main characters to walk by so that they can witness philosophical readings from historical figures because in the typical Godard fashion, it’s always going to address that he has indeed made a film. It reads out everything as fiction, and yet it still has so much more to say about the world in which we are living in today.

At the very end of the day I’m still not entirely sure what it is that I can even say that I am able to make of Weekend. We already know that it is funny from all the absurd events that take place on the screen and bring the upper class down to a state of pain. Yet there’s something more being reflected in how angry this film is, because it pertains to what goes on in the world today. And it would be easy to get thrown off, but Godard clearly doesn’t care. He doesn’t care because Weekend shows what Godard is like at his very wildest, and it’s so unapologetic because it’s a rant against the way the world functions. The very idea we see starts off funny, then quickly becomes frightening when the absurd isn’t as weird as it is made out to be anymore. And the whole way through, it’s almost dreamlike – I can’t stop watching.

All images via Athos Films.