I still stand by Denis Villeneuve’s Sicario being one of the best films to have come out in recent years but the idea of a sequel being made was always something that left me highly skeptical. While the involvement of Taylor Sheridan was one thing that held me onto the idea of making a sequel, I was also left wondering where else would they have to go in making a sequel. Part of that was answered when I saw Sicario: Day of the Soldado yet another chunk of that question was only left unfulfilled because it only leaves a bitter taste in the mouth afterwards. Gone is the nuance that made Sicario wonderful, and instead you have enough violence to build what could easily have been a great 80’s action movie if the movie never took itself nearly as seriously as it did. But because the film takes itself so seriously, it never rises above the machismo that is on full display here, thus lacking the same impact that Villeneuve had employed in order to make Sicario work so beautifully. 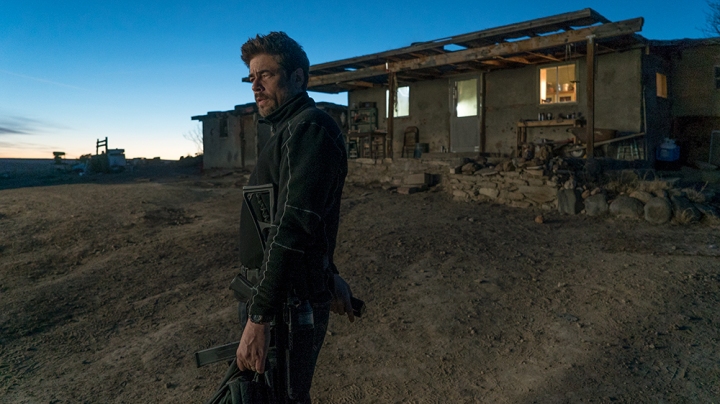 Retaining its focus on the drug war on the US-Mexico border, now at a point in which conditions have become so extreme where terrorists are being smuggled into the country – Matt Graver returns to team up once again with Alejandro Gillick in order to fight a war against the cartel leaders. Now staging a kidnapping by taking in the daughter of another kingpin in order to further escalate the conflict, Gillick finds himself in another moral dilemma involving what he is doing on behalf of the mission and his own humanity as he spends more time with Isabela Reyes, only further making the state of the war on drugs even more complicated as is. In talking about what it is that goes on and what exactly is the motivation behind what goes on during either side of the war, it feels confusing – some can already say that this reflects the reality of a war that cannot be won on either end, but beyond that, it also feels incredibly empty, and never resonates in the same way that the first film had done so.

What I kept thinking to myself about while I was watching Day of the Soldado was that even with what little it seemed Emily Blunt’s character had done within the story, her perspective was one that also gave insight about the psychology that a war that cannot be won would leave on an outsider. Because it feels acknowledged in the predecessor, there’s still a degree where you end up latching onto the environment, because you still feel like you’re there to watch everything happen as if you were in the same room. Without that perspective in Day of the Soldado, you seem to be lost within a greater map, something that Taylor Sheridan would have wanted to create, but without any sense of subtlety – something that he was never particularly the best with writing anyway, and only a shell of emptiness even in moments that would feel mortifying. To the film’s credit, it starts off incredibly with a series of terrorist attacks being executed by suicide bombers but after this moment, all of the most frustrating moments come into play.

Although the film sets off a mortifying tone from the moment it starts with the suicide bombers as mentioned earlier, they also lead to what becomes one of the film’s most glaring issues – especially when it comes to the way in which this film treats violence. Perhaps it was the intent of Taylor Sheridan to show the impact of government-influenced violence especially against minority groups but there’s also a point to which it never felt as gripping as it should be, given the current state of American politics – for some viewers it can feel perfectly timed and others it can feel ill-timed. But I’m still troubled about what to make of it because of how it also feels exploitative in this regard, for the murders taking place within this world never feel meaningful in contrast to such sequences from the first film. It was expected on behalf of Taylor Sheridan, but what good does it do him if there isn’t anything much to be said that isn’t already being repeated or refreshing?

In talking more about what I find so troubling about this film comes a subplot that focuses on Miguel Hernandez, who is played by Elijah Rodriguez. Beyond being a completely uninteresting subplot led by a poor performance by Rodriguez, the way in which it connects to the narrative we’ve already made ourselves familiar with never really feels like it has much more to offer psychologically – and with the final moments it only ever feels like setup for another sequel. In deliberately leaving so much unfulfilled by the time the film ends, it also feels like the film radically had shifted in tone from the start and it also turns more ridiculous than it ever should be. Without spoiling the film out of convenience, it’s hard enough to even believe that such an occurrence would have been possible unless it may have been an entirely elaborate plan that had been set up beforehand. In context, it just seems outright impossible and it also comes off incredibly goofy.

Many of the best qualities of the first still remain intact, but even then you can’t help but feel as if you’re simply watching what may be nothing more than a carbon copy of the original on a purely visual level – because the cinematography from Dariusz Wolski lacks the potency that Roger Deakins’s own had, which toned the colours in order to immerse yourself as part of the environment yet here it never goes beyond the colour scheme we have familiarized ourself with from the first film from the outdoors. In talking which of the first film’s best qualities still remain intact, you have Benicio del Toro continuing to steal the show as the hitman Alejandro Gillick, as we now explore another layer of humanity to himself after having already left behind an intimidating presence in Sicario. And of the many newcomers that have joined for this sequel, Isabela Moner already stands out wonderfully.

So what exactly is there to be gained out of a sequel to Sicario? I’m still trying to put the pieces together myself because not much seems to have been answered here. It’s only fitting enough to say that this is an unnecessary sequel, but as far as unnecessary sequels go, this is certainly more well-made than most of them can ever be especially nowadays. At least you still have Benicio del Toro remaining every bit as wonderful as you remember him being, but the fact it feels inconclusive especially about a hot button issue un the United States only leaves oneself feeling cold afterwards. Maybe it was only a fitting enough reaction given how ridiculous the subtitle sounds (I’m still wondering why this wasn’t simply called Soldado) but what reason is there to want this to become a franchise? But I don’t know what’s more ridiculous, that very moment near the ending as I mentioned earlier or the many title changes and how awful they sound when translated to English.