I never watched Mister Rogers growing up. Yet as I sat there, watching Won’t You Be My Neighbor?, I still felt that he was right there next to me, guiding me through all the roughest points of my life, like I was a child once again. It’s one thing to watch Mr. Rogers growing up, but also another to acknowledge everything that he stood for, and brought out in just about any person – but sitting there, I thought to myself about how someone has helped me in even the slightest ways through all my life. It felt like remembering a piece of the puzzle thought to have been missing from me for so long, and even in these years long past the life of Fred Rogers, it was in what he wanted out of children that touched many in the ways that many other children’s entertainers would do so, because it didn’t need to be an elaborate puppet or creature in order to relate with so many audiences the way that Fred Rogers did. It was just simply Fred Rogers being Fred Rogers, and he showed audiences that it may have been everything that one needed. Because he was always there to listen, just as we were there for him. 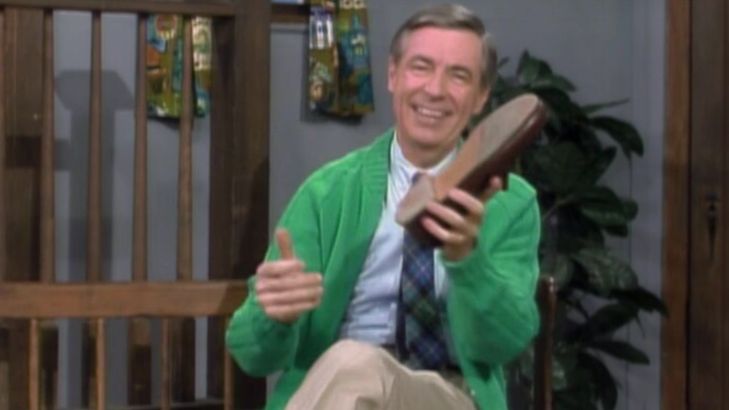 Capturing the enduring legacy of Fred Rogers’s show, Won’t You Be My Neighbor? taps into what we all saw Fred Rogers to be, not just on television – but beyond that, and what it was that he meant for people who grew up watching him along with those who had guest starred on his show. But as you look at the creative process of someone like Fred Rogers, it isn’t easy to picture how something of such a minimalistic production value could still capture people the way it did, and yet Fred Rogers just made it work. And speaking as I had no prior attachment to Mr. Rogers’s show, what I continued to think about as we were shown footage from Mister Rogers’ Neighborhood was my own childhood, and Fred Rogers just felt present as if he were there. I didn’t know what to say within that very moment, but I went along with it because it just made me feel happy. In capturing the very spirit of Fred Rogers and passing it on to those unfamiliar, Morgan Neville didn’t need to soften up his outside image – he just showed Fred Rogers as is, and that’s what was most effective.

But even in capturing the legacy that Mister Rogers had carried outside of the show, something far more heartbreaking comes forth when you’re being made to think about the way his message had come across to his audiences. Of course, when many kids were in awe at what Rogers had been able to represent within his simplicity, what didn’t translate very well over to adults was that same lesson – and others outright disliked what it was that he wanted to reach for. Through reaching out to children, you just feel Fred Rogers wanted to unite people together by inviting everyone to feel like a “neighbor” to him, and those “neighbors” were never limited to the same old people you would be seeing on a regular basis because that was all society wanted you to see. Perhaps there was something that could have been more interrogative regarding this aspect of Rogers’s show that could have gotten more down to the bone regarding how Fred Rogers wanted to make sure only the best for those he loved most – even if it conflicted with his political beliefs (Rogers was a Republican).

It brings me to address the segments that involved François Scarborough Clemmons, for he was also an openly gay man and if that were revealed about his personal life, the funding for Mister Rogers’ Neighborhood would be cut. Something about this didn’t completely sit well with me, because we know already that because of the era in which we knew the show was big, it was also a time in which we knew that such a prejudice was normalized in the world. While it was definitely touching to listen to Clemmons talking about what the experience of being on Mister Rogers’ Neighborhood had meant for him, especially in regards to Rogers’s own fight to make sure that he would be able to receive the love he knows he wanted his friend had needed most, I still feel as if we never really explored this aspect enough – considering how important it was for a soul like Rogers to have Clemmons on the show as a regular, continuing to capture the hearts of many children in America.

Although in the end, this isn’t a documentary that wanted to show us everything that Fred Rogers was, it was all about what it is that people have learned from him over the years and will continue to learn. Rogers was a man who represented what we believed to be the moral values of the American citizen. But in the fact that Rogers was just so ordinary, like the rest of us, maybe we just didn’t know we had what it takes to make ourselves feel special the way that we are, for the film opens with Rogers making a statement about what it is that children take in and learn what we may not have been able to, you still feel the impact that he made on a whole generation. He simply wanted people of many different sorts to feel loved, and to love each other back, even through tough times as shown from how he was never one to shy away from current political events so subtly on his show, he knew that his goal would still hurt him greatly – but he did it anyways.

I brought a friend of mine to watch this together with me, and even though he didn’t watch the show as much – listening to him on the subway ride reminiscing over his own youth, how he felt unwelcome by other peers during elementary school. In that moment, I still felt that the impact of Fred Rogers was still speaking wonders there, because he managed to bring people of all sorts together in some way or another, even if one hadn’t watched his show, because he just showed everything as he was. From watching Won’t You Be My Neighbor?, you already find yourself being reminded that in Rogers’s honesty, maybe that was everything that people needed in order to really feel as if they were coming together – but even over the years that message he wanted to send away has only been blurred all the more. And we sometimes forget it can just be as simple as 143 (as Rogers said, “I” has 1 letter, “love” has 4, and “you” has 3).