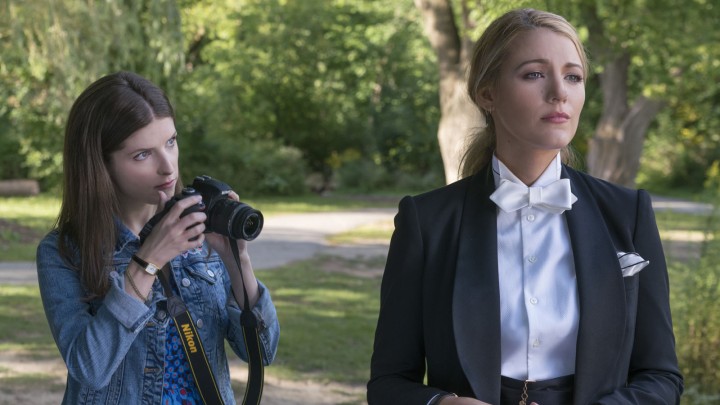 Up until now, I’d call Paul Feig’s film career “admirable.” His breakout film, Bridesmaids, is a bonafide classic to be sure, but his subsequent genre experimentations with women, hysterical as they can be, have been more interesting than entirely successful, mostly because he only seemed to have a surface appreciation of the genres he was working in. The Heat is a great comedy but a so-so cop actioner. Spy is a great comedy but only a decent spy thriller. Ghostbusters ’16 is a great comedy but not much of a blockbuster event. Again, though, this is more than any major studio was willing to do with female leads, and even if I think the resulting films could’ve been better, they were strong enough efforts to make me a fan.

Now Feig pushes himself a little by fusing his comic sensibilities with neo-noir. The result is a little lighter than the trailer might lead you to believe, but the effort pays off dividends. A Simple Favor is a twisted comic mystery that will keep you on tilt; it’s Feig’s best movie by a mile.

A Simple Favor takes us into upscale suburban Connecticut where we meet Stephanie (Anna Kendrick), a widowed mother who lives off her late husband’s life insurance. Stephanie is the kind of high-energy parent who volunteers for anything and everything at her son’s school, alternatively impressing and annoying the other class parents. When she’s not shamelessly belting out “Mambo No. 5” in the car, she pours her free time into vlogging, sharing her wisdom and gluten-free cookie recipes with the other moms who troll the internet, likely with a glass of red wine in their hands.

Enter Emily Nelson (Blake Lively), who seems like she was genetically engineered to be the anti-Stephanie. Whereas Stephanie goes out in tasteful dresses and has gotten into the habit of replacing her “F” words with “fudge” and putting money in the “Oopsie” jar every time she slips up, Emily wears men’s suits that she tends to shed at her whimsy, swears in front of her kids, talks shit to her boss, and is somehow both openly intimate with and hostile to her husband Sean (Henry Goulding, Crazy Rich Asians) in the same moments. Stephanie takes an immediate shine to her, and the two of them connect so hard, it’s not long before Stephanie is sharing some of her absolute darkest secrets with Emily. Stephanie goes as far as to consider Emily her best friend, even though they’ve only known each other for a few weeks before Emily asks for the titular “simple favor”; pick up her son from school and hold on to him until she gets home from a crisis she has at work.

Emily drops off the face of the planet immediately after that, and Stephanie’s world shifts. She finds herself getting uncomfortably close to Sean, and because there’s nothing more suspicious than a man with a missing spouse who keeps hanging out with some other girl, the cops start bearing down too. Under these and other pressures, Stephanie starts looking into Emily’s disappearance for herself, only to find that she may be in way over her head.

One of the more difficult aspects of critiquing a mystery is that they benefit from their, well, mysticism, making it tricky to talk about why something works as well as it does. A Simple Favor is spoiler-proof in the sense that you could read a Wikipedia summary of the plot and still get something out of seeing the movie. It’s absurd, but that’s what makes Feig so perfect for it; he finds the humor of the situation without ever treating the characters themselves as a joke. It takes no effort at all to just kick back and enjoy the ride with every last insane turn it has to offer; as such, it feels wrong to break down any of those turns in-depth to those who don’t know what they’re in for.

One thing I feel comfortable saying is, whether by design or not, some of the expectations of neo-noir are weaponized against you as the twisted and complicated natures and histories of the three leads begin to unravel. None of these characters are necessarily good people, but they’re all astonishingly likable; the potential cosmic judgment for their actions is simultaneously dreaded and respected as the movie poses questions about how the facades we put up for the world hide our pains, and how our obsessions can damage us beyond repair. Credit Anna Kendrick and Henry Goulding for being able to charm breathable oxygen out of the ocean; of course, don’t forget Blake Lively, who creates a character that instantly sears herself into your memory.

Feig, however—working from a script by Jessica Sharzer and a source novel by Darcey Bell—deserves his share of love too. Aside from being one of the best actor’s directors working right now (his dialogue scenes here are as sharp and maybe even sharper than they’ve ever been), he’s also stepped up his technical game in a big way. John Schwartzman is Feig’s DP here, and they utterly nail the vibe of upper-class suburbia while getting some of the nicest compositions of Feig’s career—including an iconic intro shot of Emily walking through a rainstorm as a loose umbrella blows past her in slow motion, telling you everything you need to know about who she is within five seconds. Even Theodore Shapiro, AKA the guy who scores the Adam Sandler movies, steps up and delivers some impressively solid incidental music that compliments the atmosphere without overwhelming it. To be fair, Feig still doesn’t have much of a grip on shooting exciting action scenes—there’s a car chase late in the second act with some sloppy geography that I suspect could’ve even been cut entirely—but the editing in general (by Feig’s longtime collaborator Brent White) has a nice, breezy flow to it that cuts right to the quick of the story being told.

If there’s any problem to be had with this movie, some of it might be in that rhythm—I found myself occasionally pulled out of the movie by how it paces certain sequences—but more of it would probably be in the ending. It ultimately feels just a little easy, yet it’s not at all unsatisfying and certainly not unreasonable. I already admired Paul Feig; A Simple Favor points to the absolute best version of him, a director that I want more of as soon as possible.

All images courtesy of Lionsgate.