It’s not unfamiliar to see WWII revisionism coming ever so frequently but there’s something about Overlord that also carries a distinctive charm that would also grant it a place above most other films of its sort. Director Julius Avery and screenwriters Mark L. Smith and Billy Ray have crafted what shows itself to be Hollywood escapism at some of its finest, especially in its celebration of the heroism that led to the downfall of the Nazi party. But Overlord already knows the sort of film that it’s trying to be, and doesn’t pretend it’s anything far beyond that. That having been said, I can’t help but feel as if there could have easily been so much more done with a concept like this especially given its own setting since it’s not terribly inventive with what it has, though there’s no denying that it has a lot of fun with what’s available to work around. Sometimes I think that’s all that would really be necessary in order to create an overall fun time at the movies, even providing that satisfaction of seeing Nazis getting exactly what they deserve from start to finish – but who wouldn’t want to see that? 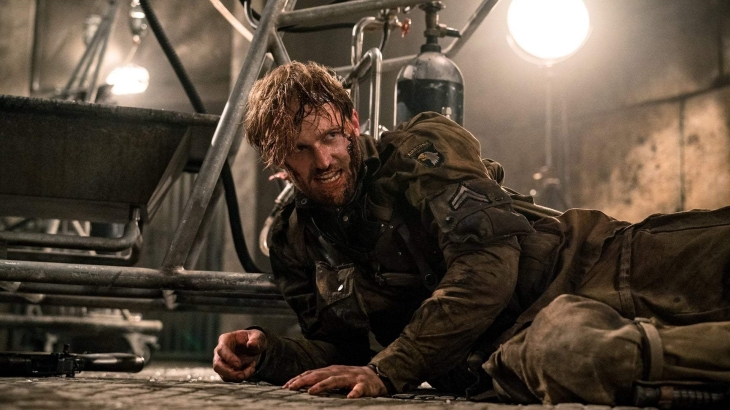 Taking place right before D-Day, we focus on a group of American soldiers that have dropped into France with a mission of destroying a German radio tower. The group consists of the African-American Private Ed Boyce (Joyan Adepo), Corporal Ford (Wyatt Russell), Private Lyle Tibbet (John Magaro), and Private Morton Chase (Iain De Caestecker). After the group meets a French woman named Chloe (Mathilde Ollivier), they also discover a nearby Nazi hideout in which they also perform experiments on human victims. Everything starts fittingly enough with the soldiers parachuting their way down even without an idea of whether or not they would survive the landing, but the fears of what’s to come only take on a whole new form as they realize what the settled Nazi soldiers have planned as the film perfectly sets up its own roots as a B-movie, then going completely unhinged soon after.

Overlord isn’t telling a story that hasn’t already been done by many others in the past, but it seems to know that and it wants to go completely crazy with the idea it has in its own hands. Sometimes the buildup never really feels as warranted as it should be, and Julius Avery has a bad habit of showing that he’ll take everything so seriously – but at the film’s best it succeeds at being purely entertaining. There’s clear influence to be found from the films of Stuart Gordon (in particular Re-Animator), and the film is clearly having fun with the material that it has as thin as it may be, but even the actors themselves are so clearly having fun with their roles it makes the ride all the more entertaining. In today’s age, it’d also feel nice to see a diverse group of soldiers fighting against Nazis, and at the very least the film fulfills that exact promise.

With all of this having been said, I do wish that it was going full-on out on the craziness the way it had done so in its final moments. Being a film all about the experiments that Nazis have committed upon humankind for their own personal gain, Overlord would easily have benefited from embracing its own roots in the horror genre a lot more – because it doesn’t seem to have all that much more to work with regarding its own setting during WWII. And on that ground, as addressed previously, it seems to have that problem with the fact that it takes that aspect of itself far more seriously than it should and it also created an awkward blend of the genres which doesn’t feel as effective as a means of transitioning between the two as it should. But once the action starts, the whole film just keeps going and never lets down, though you’re still wishing that the film had done so much more of this prior to the moment it all comes by.

Nevertheless, there’s a great deal of fun to be had here. There’s a great deal of fun to be had just on the count that the film does give exactly what it promises, the sight of Nazis getting gunned down by people representing the good in our society – because what’s more fun than seeing Nazis getting destroyed by people of colour, Jewish soldiers, and women on the screen on an IMAX screen? It was nice to see a film like this being able to let loose, especially once the action started, which was more than enough for me to forgive the film for its own inability to commit to one tone. When Overlord starts going crazy, you can only expect everything to get wilder from there, though it’ll also come at the cost of a sometimes drearily long wait.

All images via Paramount Pictures.