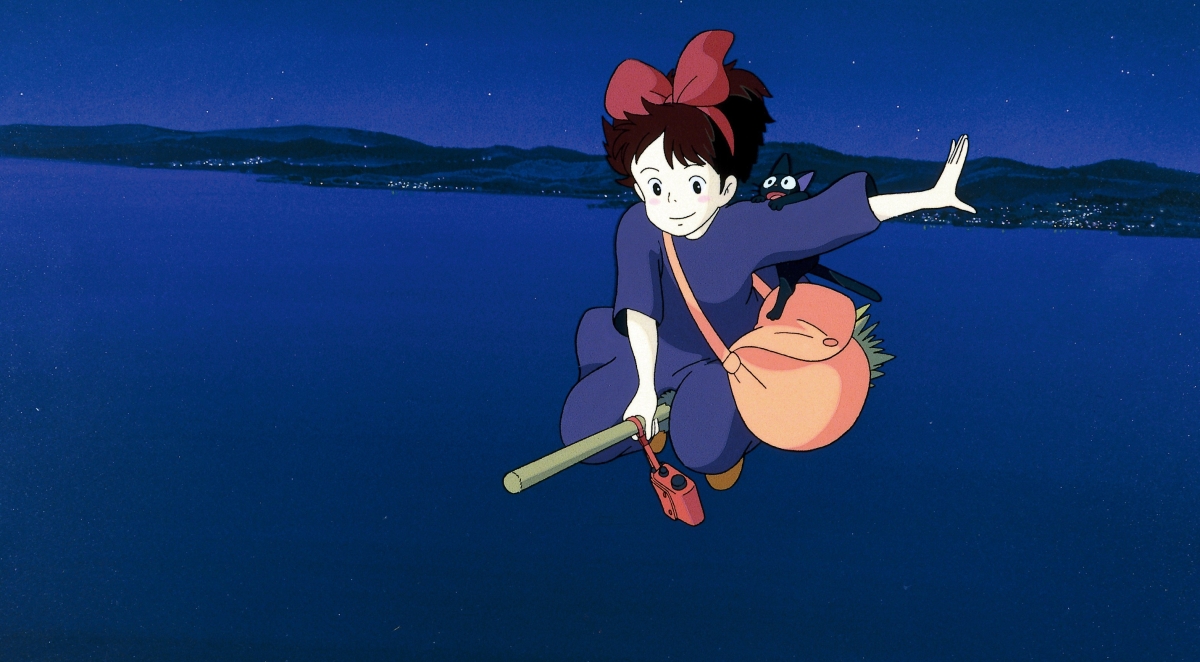 Kiki’s Delivery Service is a film from my childhood that I had not revisited for so long, but to watch this Miyazaki classic in its native language for the first time after having been used to watching the dubbed version provided by Disney for so long only made the whole experience feel almost new to me. But all these years of having not seen Kiki’s Delivery Service have also made me look at the film under a new light; for something about it seems to click with me more as an adult now versus what I saw it to be as a kid. If that’s indicative of anything, it’s everything that one could expect from Hayao Miyazaki, and in a largely wonderful body of work, it’s yet another masterpiece.

Alongside his previous film My Neighbor Totoro, this is also the simplest story that Hayao Miyazaki has ever brought to the screen. It starts off fittingly with the young trainee witch Kiki leaving her home for the first time, together with her cat Jiji. Much like My Neighbor Totoro, Kiki’s Delivery Service keeps everything very straightforward as it shows the young Kiki finally trying to adjust to a new life away from home, but as Miyazaki shows you this perspective from the young Kiki it also becomes one of his most heartwarming efforts to date. It’s heartwarming because the thought of a witch coming to live among us could only seem so out of this world, but also because she lives an experience that would be familiar to all of us in some way or another.

In Kiki, Miyazaki creates one of his most endearing and relatable protagonists. In many daily functions that make the city life so ordinary to us, Miyazaki shows them to be something completely new, especially to a witch unfamiliar with how the world around her works. As she starts coming of age, we get a better sense of the sort of person that she wants to become, as well as the many relationships that she has formed in order to make her the person that she is. Throughout the film, she lives an experience that is familiar to us in some way or another, from moving into a new place, finding a job, feeling insecure about ourselves, and adjusting to a life all on her own, and it’s these ordinary moments that keep Kiki’s Delivery Service ever so vibrant.

Viewing Kiki’s Delivery Service as a kid, it’s hard not to be charmed by how vast the world that Miyazaki portrays Kiki’s new home. In what appears to be his most ordinary-looking film, just the thought of it being room for a new experience is what makes Kiki’s Delivery Service feel every bit as magical as it is. But it’s also a great testament to Hayao Miyazaki’s skill as a storyteller when you also take into account his talent for bringing magical realism to the screen. All of the most fantastical elements in Kiki’s Delivery Service feel like reflections of real world experiences that will stick with children all the more, but as one grows older these moments feel almost like reflections of what we could be feeling at some point of our life, especially as we grow to take on more responsibilities that never crossed our mind during the peak of our youth.

When talking about what this film speaks for its adult audiences, Kiki’s experiences resonate more as we slowly get overwhelmed by the world around us. There’s always a set expectation from people we know as we grow older, that at a certain point we should have an idea about what it is that keeps us motivated into doing what we love most. Despite being Miyazaki’s most playful film at heart it also carries a very melancholy shadow, especially when it comes to how it portrays the sort of burden we place over ourselves based on expectations set by people around us. Even as Kiki finds something she loves doing, she still knows she isn’t perfect at it either, yet it’s always lovely to see how she tries to make everyone around her happy whilst finding her own identity along the way.

There’s not really any sort of dramatic heft until the film’s final moments but the simplicity of Kiki’s Delivery Service will prove itself more than enough to win anyone over. It’s a film that feels made purely from kindness, but also one that speaks to how we continuously try to cope with the way the world around us moves forward and how we motivate ourselves to continue going our own way. If there’s anything else that speaks towards the magic that Hayao Miyazaki brings forth in Kiki’s Delivery Service, it’s all within the nature of its title character. She isn’t one who really needs magic to capture our hearts, all she needs to do is be herself and soon enough we’ll see ourselves in her. Being a pure embodiment of kindness and remaining ever so beautiful all these years later, Kiki’s Delivery Service isn’t just one of those films from my childhood that strikes chords with me all these years later but it’s also another high point in a master’s body of work.