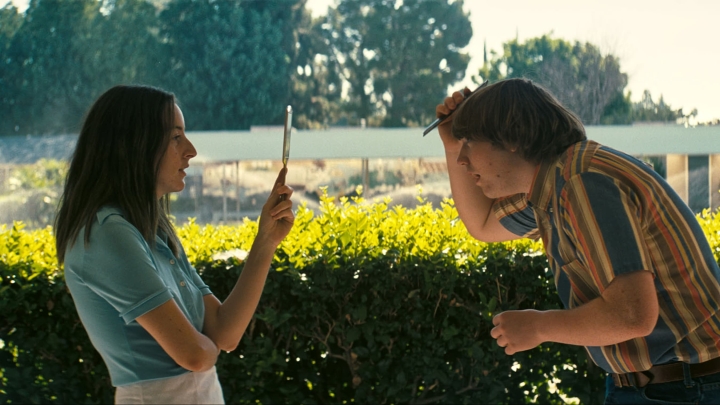 Over the years, Paul Thomas Anderson has made a name for himself as one of the best American filmmakers working today, with films like There Will Be Blood, Phantom Thread, and The Master all under his belt within recent memory. With Licorice Pizza, Anderson finds himself returning to familiar territory as he brings audiences a coming-of-age comedy set within an era of Los Angeles that he grew up within. Perhaps the labelling of a “nostalgic love letter” to the 1970’s would be the first way of describing the concept of a movie all about growing up in this era of Los Angeles, but the picture being painted here is a much darker and more brilliant one than what meets the eye.

Cooper Hoffman stars as Gary Valentine, a 15-year-old child actor in the San Fernando Valley. While preparing for his high school picture, he meets Alana Kane (Alana Haim), a woman ten years his senior. Eventually, the two of them start going out with one another despite Alana’s initial hesitance and the obvious age gap – but this uncomfortable shell is only one layer of brilliance in Paul Thomas Anderson’s own take on the coming-of-age story. It’s aimless, fragmented, broken, perhaps you’d be one to think that Paul Thomas Anderson were making a hangout film akin to Dazed and Confused, and yet the actual picture we’re seeing here is more melancholy, sad, and not so much the “love letter” that most of these films tend to frame a past era under.

With painting a picture of 1970’s Los Angeles, Paul Thomas Anderson is one to bask in its glory, especially with the way that we see Gary Valentine’s own means of living the dream as a child actor, but he doesn’t let that limit his own reach to painting how he remembers what life was like in the day. Anderson doesn’t hold back with showing 1970’s Los Angeles as an era and a city that was built upon racism, bigotry, and sexism among many. One of many examples of this is best found in the two controversial scenes featuring John Michael Higgins as Jerry Frick, who owned the Mikado restaurant chain at the time. To address the stir which these moments have caused, because of Frick’s openly racist attitudes when talking with his Japanese wife, it paints a picture of how Americans fetishized what they saw as foreign cultures to establish themselves as “exotic.” A knee-jerk reaction for some would be to take this as a joke at the expense of Frick’s racism (which I personally don’t mind), yet the discomfort is emblematic of the fact that people Anderson was around turned this into a joke.

For as much as many great films can show the era in a nostalgic and often loving light, Anderson doesn’t see himself as wanting to be another one of those. Take it less as him trying to go by way of Richard Linklater or John Hughes, and more so as Anderson refusing to whitewash America of the day so that it would be reflective of a memory he can share with his viewers. It isn’t always a comfortable memory, but it is the honesty that wins me here. This wouldn’t always be the perfect way to approach things, but Anderson takes the very template as established by filmmakers who are revered for their approach to coming-of-age to break down what they were to supposedly “remember the happy times.” In fact, that is what Paul Thomas Anderson is dedicating most of his film to, yet the supposed “happy times” didn’t always last in the ways that a Hughes or Linklater coming-of-age title would insinuate. The aimlessness always feels exactly like that, but the lack of direction brings back memories of Mike Nichols’s The Graduate, and while not as explicitly regretful as said film I still see that same melancholy lingering all throughout Licorice Pizza.

Nonetheless, the “good times” are still portrayed as a lingering memory of what it was like to feel young in Licorice Pizza – like it always should in every great coming-of-age film. As Paul Thomas Anderson works with the structuring of events through vignettes in the adventures of Gary Valentine and Alana Kane. While Anderson maintains the tone to be one that’s often very funny, it’s abundantly clear that Anderson is framing much of these as a fantasy lived within by Gary Valentine. This is how the inappropriate age gap between Gary and Alana comes about; because Gary sees himself as someone who buys into the naivete of his supposed “stardom,” bringing him anything that he absolutely wants. As the film goes on, we go to see how he slowly destroys his own connections with those around him, but it’s the earnestness in how Cooper Hoffman – the son of the late Philip Seymour Hoffman – portrays him, that I think makes his story so compelling.

Alana Kane isn’t all that much different either, but the performance from Alana Haim is one that I believe to be on another league entirely from Hoffman’s. Yet to talk about how Alana Kane’s role functions in this story alongside that of Gary Valentine’s comes from a place of understanding what it feels like to be in her position, as an adult. Because despite being an adult, she still finds herself infantilized by the people around herself, longing to have a sense of freedom that she was able to embrace from being young once again. It’s clear enough from the first moment where we see her at the school, but also around her family (fittingly enough, played entirely by members of the Haim family). In their company, she feels entirely constricted, but seeing what it was like to be young while hanging out with Gary is what drives her forward – acting like she’s his age and playing into his fantasy.

These don’t always add up to the most positive end results, though. Throughout the film’s setting, as mentioned earlier, we see spurts of what life in Los Angeles was like for people in Gary and Alana’s position, whether we see Gary as the child star on a Lucille Ball-like television show (owing back to Yours, Mine & Ours), his aspirations to start up a business of his own, or the encounter with Jon Peters (ironically played by Bradley Cooper). Alana’s story is no different, as we see her working in the office of mayoral candidate Joel Wachs (Benny Safdie), but it’s how these two life experiences come together as a parallel that I think makes for a beautifully crafted mosaic of what life truly felt like to live in Los Angeles during the 1970’s. For the people who made the most of it, it ruled. But for people like Alana and Gary, it sucked.

Which brings me to talking about how Paul Thomas Anderson paints their relationship. It is never romantic, as it’s distorted by way of Gary and Alana’s desire to live within the world of a fantasy. As we see sparks of reality coming back and forth, the fact that even the happiest moments are nothing more than merely a rendered fantasy always leaves Licorice Pizza with that wholly melancholic edge, as a supposedly happy ending by image (not as much by concept, with all things considered) is turned into a sad one by nature. I think to say that Licorice Pizza is a film about friendship and connecting with one another in the period would only be underselling the film overall, for the darker portrait underneath isn’t unusual for Paul Thomas Anderson, it’s in line with the general tone of his work.

Licorice Pizza, to me at least, represents what I see as a film all about wanting to live within that dream, but also destroying oneself in that process. As I let the film sit within my head more, I also thought to myself that to write about it as a romanticization of its ideals, as I’ve seen some people had done so, is a heavily disingenuous way of engaging with what Paul Thomas Anderson has crafted here. This is very much a film that was built upon and defined by the memory of growing up in Los Angeles in the early 1970’s, but in that aimlessness, it feels less like a hangout movie but more like watching the joys of one’s youth slowly fade away as people try to cling onto it in some manner. But truthfully, how could one expect a wholly happy film about growing up in this period from the writer-director of Phantom Thread or Boogie Nights?

All images via MGM.