It’s often known that Japan is the home to some of the most humanistic of world cinema. With the films of Akira Kurosawa and Yasujiro Ozu coming into thought, it is no surprise but often cited as the greatest of the masters of Japanese cinema is Kenji Mizoguchi. Often cited as the first major feminist filmmaker, Mizoguchi’s films are often known for how they depict women and their struggles within Japanese society. Though of all the films that I’ve seen from such a wonderful filmmaker, the one that always stood out to me as the very best of the bunch is none other than the heartbreaking Sansho the Bailiff. This particularly is a rather difficult film to revisit on my end mostly because of how much emotion it can elicit from a viewing. But the manner in which it earns such strong reactions, however, is what I feel represents some of the best in cinema. 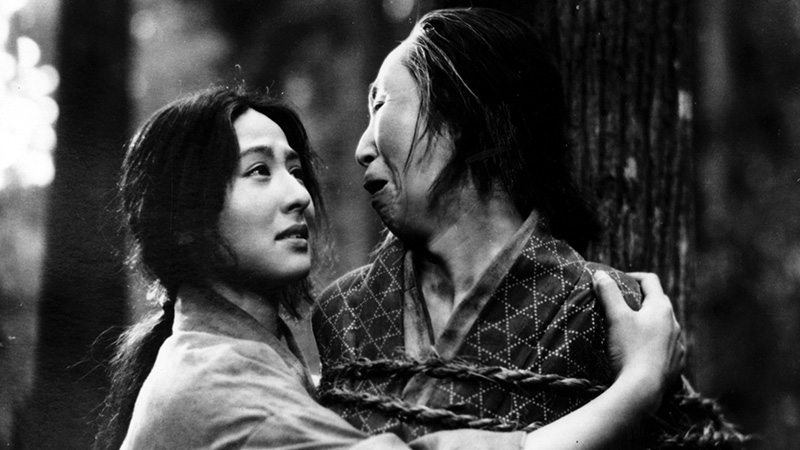 Kyoko Kagawa as the weakened Anju in Sansho the Bailiff.

Adapted from a tale written by Mori Ogai, Sansho the Bailiff tells a story of a governor who is sent into exile after his ideals contradict the reigning lord. In turn, his wife, Tamaki, and her children, Zushio and Anju, are left behind. They go out on a search for the missing father, for how strong their love as a family is, but all that welcomes them is nothing more but cruelty. They are tricked by a priestess who eventually sells the mother into prostitution and the sons into slavery. Simplicity may be evident within the story and the roots of where it is developing, but the complexity behind what it is exploring is where Sansho the Bailiff finds itself becoming an achievement unlike any other, and in turn, the final result is truly an emotional wreck.

This particular film was always such a difficult film for me to talk about especially as it’s one I rarely revisit with one particular reason coming to mind. I rarely revisit it because of the sort of emotional impact that comes out is too incredible for words, whether it be either depressing or frightening. It is depressing in a sense that as we watch the family’s trials as they only encounter cruelty as their life continues on. It is also frightening in a sense that when we consider how the film and the short story it is based on are named after its antagonist, it is how Kenji Mizoguchi is depicting the dehumanization inside of a figure like him that creates such an impact. Yet even more frightening is a figure like Sansho when we come to consider all the power which he contains over the slaves – for he brands anyone who attempts to escape.

Mizoguchi’s use of the long take is where Sansho the Bailiff creates the powerful resonance which lingers after one watch. From his own mastery of the long take, a specific image comes to mind in regards to the emotions of Mizoguchi’s characters. Saying the cinematography is beautiful is one thing is another, but what is it that the lingering on specific scenes is adding? The way I look at it, when Mizoguchi is lingering much longer than usual, an image of everlasting misery comes in, which in turn is reflecting the sufferings together with a distinct loss of humanity. Mizoguchi’s direction for Sansho the Bailiff guides his viewers down the emotional paths of his characters, thus bringing to the screen a basic understanding of humanity, only to be aided more by the cinematography of his frequent collaborator, Kazuo Miyagawa – giving off some of the finest examples within said field ever to be put on film.

Among many of Mizoguchi’s trademark themes are also featured in Sansho the Bailiff, whether it be poverty or the trials of women. Now to speak of how women are pictured in this film, it is already made clear that this film is set in a time where they were looked upon as the weaker gender, and oftentimes we see that they are being carried around by men and a major plot point involves the mother being sold into prostitution. As Zushio has grown to become a sturdy man after years of having been enslaved by Sansho, Anju, on the other hand, for as sturdy as he had progressed over the passage of time, is also more emotionally scarred than the other. It is clear right here that Mizoguchi is critical of the historical treatment of women, for as we witness Anju’s story all the way until her final moments on the screen, there is deep sympathy coming in regards to how tenderly he is looking at women within his own films. He places them at a level to which the humanity shines more, for with the men, humanity is being taken away, adding more to the frightening image left behind.

I would probably be going on much longer, but it is too difficult to pinpoint every last detail to a film like Sansho the Bailiff which in turn formed the powerful experience that it has managed to leave behind. From every film I had seen out of Kenji Mizoguchi’s wonderful body of work, it is also the most politically critical that I have come across and at the same time it is also his most human. Although Kenji Mizoguchi has a tendency to focus on women and their trials within a society that had looked at them in an unfair manner, it is clear right there that he understands why the human soul is so fragile on the inside. To call Sansho the Bailiff a heartbreaking film only understates what it is set to leave behind, for knowing sexism towards women in society still runs in today’s world, the subject matter which is pictured here is risky even by the standards of a modern age. Sansho the Bailiff does not only earn the tears of viewers left heartbroken by what it presents, but it also leaves an impact that feels like a scar.

All images via Kadokawa Pictures.