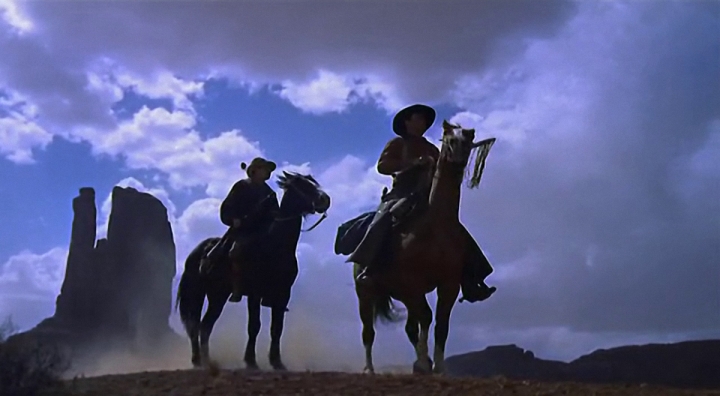 A lot seems to have changed amidst the perspectives from watching The Searchers at different points of my life. My first viewing from childhood left a mark on my life that has never faded away. Looking at The Searchers amidst a more critical standpoint only further solidifies how highly I think of it. At this point, John Ford has mastered story structure in such a manner that everything is so seamless from start to finish, it could not be any better a film than it already stands out to be. Often hailed as the greatest American western, the reasons behind such a lofty reputation flash so clearly on the screen. In all the beauty which it displays, it is also a film so scathing with its views on the intolerance flooding society that still bites perfectly well today.

John Ford’s image of a hero in the character of Ethan Edwards is played out to an explicitly racist image, yet that is only a part of the point that The Searchers is getting across. Ford addresses the racism that plagued America back within the day as a means of calling out how the violence in society is indeed a result of racism. Yet the way that Ford establishes a character still has us rooting for him to a specific extent because we can tell even with the racism behind his motives, he has good intentions for the people he loves. It is right here where the cleverness to The Searchers arises, it paints what could easily be a hero figure over a racist personality and thus criticizes his actions in the process.

What makes The Searchers all the more fascinating is the fact that even with Ford looking at Wayne’s Ethan Edwards as a hero figure, he does not glorify this violent nature. He paints a more realistic image of the traditional western and makes the audiences aware of it thanks to Ford’s clever methods of deconstructing the pathos of the western hero. Ethan Edwards is an anti-heroic figure, what fills up his mind is the hatred for the Comanches. Or perhaps what Ford shows is that Wayne is not very much the hero like he may be shown for the majority, and clues are left everywhere. The film is critical of his own actions, but it is the progression of Edwards’s arc that makes The Searchers interesting as it is, for it presents a study of character that challenges the “American way” in the progress.

It’s clear that Ford has a message to give to the audiences that the racism filling our society indeed is disgusting, especially as the groups whom parts of our world view rather lowly are not so different from us after all. The image especially is clear from how Ford paints Ethan and Scar. When they share moments together, the realization is clear that they are not so much different from one another. Their hatred has broken both ends of their families apart. With that said, in the end, there is no winner. His family is full of good people, but in the iconic closing scene, he only comes to terms with what he was this whole time, which is an important moment that I will get to in due time.

Looking at the film from the aesthetics behind all of it, what’s undeniable is how especially beautiful it is even today. John Ford was a pioneer of location shooting, and the landscapes which he captures on film from beginning to end are some of the most gorgeous that could ever be captured on film in such a long time. His use of Technicolor only livens up every perfectly framed shot, nothing can be changed to make it any better, it is all amazing as it stands. Rarely can one find themselves coming across such beauty being displayed on the screen.

The traditional westerns always show a sense of triumph for whom they define as the “good” and a sense of defeat for the “bad,” and it’s made clear in the power of the final sequences. Lessons may not be learned for the character of Ethan, but even with his good intentions, he only has realized what he is. Even when a moment of happiness is supposed to occur, Ethan only looks back and delivers shame with his emotion. He is ashamed that he only realized what he was, and by the conclusion he figured that because he means well for his family, he rides away, to make sure they don’t adopt his racist attitude. In spite of the fact that he may have done well on his journey, he also realizes how much he has damaged his own family for he is never a hero to this story.

It’s amazing what The Searchers makes its audiences aware of, especially during its day. Society is fueled with hatred and if it maintains this hatred, it only breeds more. Upon realizations regarding the morals presented on the screen, what’s formed is one of the most daring commentaries on racism for the day. It still maintains every last bit of its relevance, for what Ford created is truly one of the finest of the western genre. A deconstruction of normal tradition, a means of bringing awareness to the darkness amongst the figures whom we perceive as heroes. There is no heroism within The Searchers, only more damage.