Ingmar Bergman’s supposed theatrical swan song, Fanny & Alexander, is a film that I wish to call one of Ingmar Bergman’s finest but after having viewed the masterpiece within the television version – a revisit of this version did not go as well as I had hoped. That is not to say it is a bad film, but while more of the good manages to shine over the bad, it is rather evident that it is an incomplete film. We have the elements that could easily make a great film at hand, and even with a daunting length of a little bit over three hours, I cannot help but unfortunately feel that not enough of the details had been left for us. It is indeed a good film as it stands, but it is only best viewed in all of its complete glory, the only version which I choose to go with as of now. 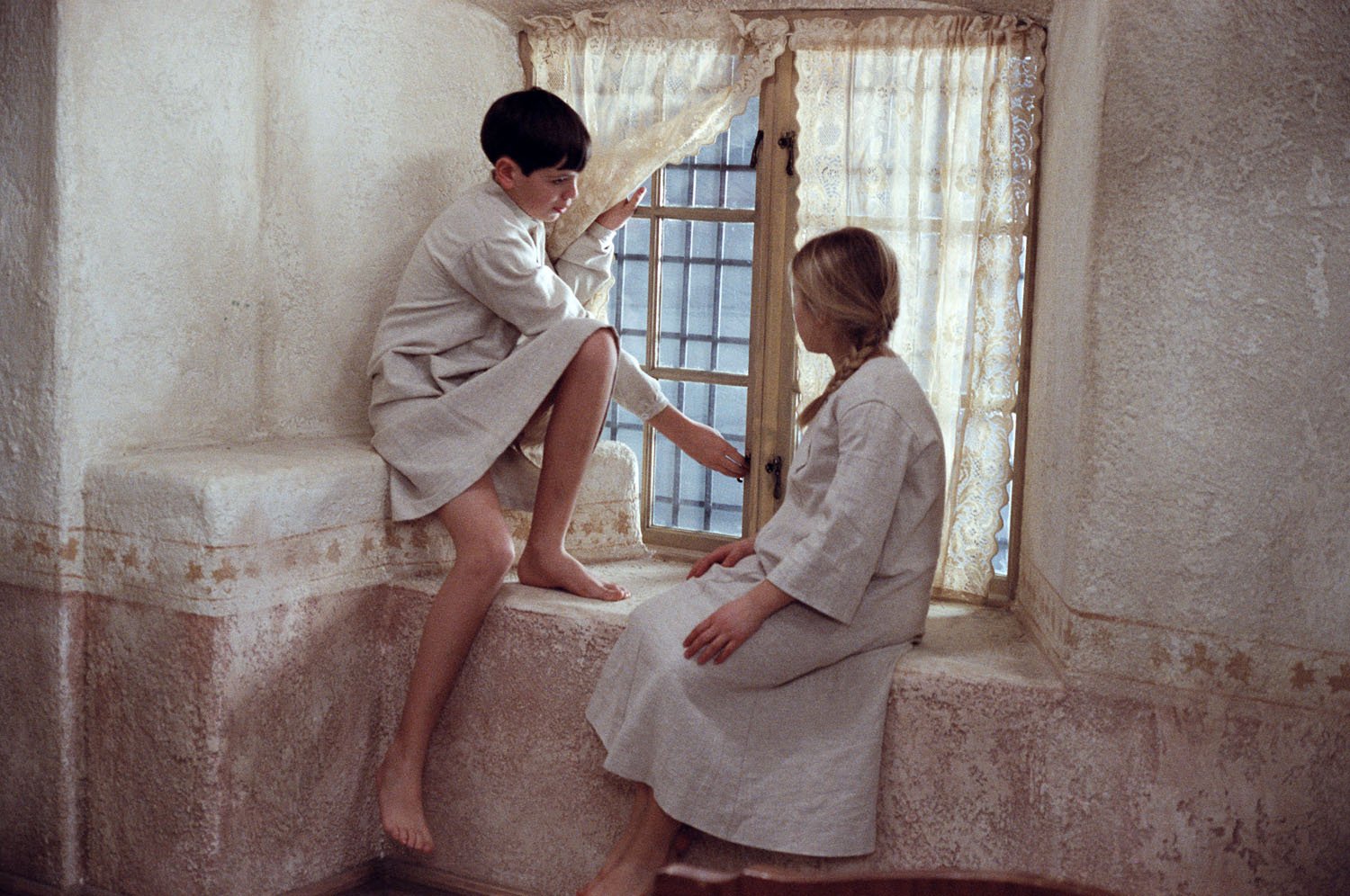 Pernilla Allwin and Bertil Guve as the two titular children in Fanny & Alexander.

The best way one can view Fanny & Alexander is that after viewing many of Ingmar Bergman’s earlier features, it is a perfect summation for everything he had created prior. It feels as if with Fanny & Alexander, Ingmar Bergman wants to get a grasp of everything which he had been tackling within some of his own finest achievements, and show how personally he had been so affected by what he was creating by placing it all within this tale of childhood. For how much Bergman wanted to get all of it across in what would be his final film to be shown in cinemas, it is rather unfortunate that what we had been left with is somewhat of a bastardized version of a map of ideas that ultimately could have said much more than what we had been left with.

Where this version still benefits comes from how it is willing to explore the challenges that anyone can face within childhood. The title characters, as we see, are living within a realm of happiness, signifying the best moments of one’s life. The challenges soon come in, when a significant member of the family passes away, and tragedy strikes. Fanny & Alexander presents a map of what makes a childhood what it is, within all the happy moments and sad moments. Given how personal it all feels as a project for Ingmar Bergman, this supposed childhood could possibly be not only a childhood which we are watching, but a reflection of life in front of your own eyes, for even amongst our daily routines we have these comedies and tragedies coming in.

Unfortunately, the problems that bog down the theatrical version come from how it is far too obvious that what we are viewing is a condensed version of a much longer film. There are specific elements to Fanny & Alexander that intend on presenting an exploration of family dynamics which don’t resonate nearly as much as they should. Within the slightly more than three-hour running time, it feels so difficult trying to connect with the family because of how we have so much emphasis on specific members and others do not carry the impact that supposedly significant moments should contain. A big problem that comes to mind when we think of the theatrical version that persists is this, for all the emphasis we have on Alexander’s own coming-of-age, Fanny is hardly within the spotlight in spite of being one of two titular characters, thus she fails to resonate in the theatrical version.

That’s not to say this supposedly rushed version of the film is full of bad, because there are many wonders coming in from how every shot is framed and designed. The cinematography by the always wonderful Sven Nykvist, Bergman’s most frequent collaborator, is beautiful as always, and the set pieces are some of the most divine ever to be present within a coming-of-age tale. It is clear that Ingmar Bergman directs such a personal tale so lovingly from start to finish, from how he shows the small moments and how they create as much of an impact as the much bigger events, and for reasons like this, he is one of the finest film directors ever to have laid their touch on the cinema.

Fanny & Alexander‘s theatrical version is a half-masterpiece that is still full of many good moments, but I can’t help but shake a specific feeling that what I had been viewing was certainly an incomplete effort. Seeing as Fanny & Alexander had originally been conceived as a four-part television film, I’m curious as to why Bergman chose to release a butchered three-hour version for theatrical release. It is as personal and spiritual as he can get, but only half of those ideas seem realized in this version but nevertheless, what we were left with is a compelling work and a rather high note to which he ends off directing theatrical releases. My only wish was that if he had already created one true vision for such a project, he chose to stick with that.