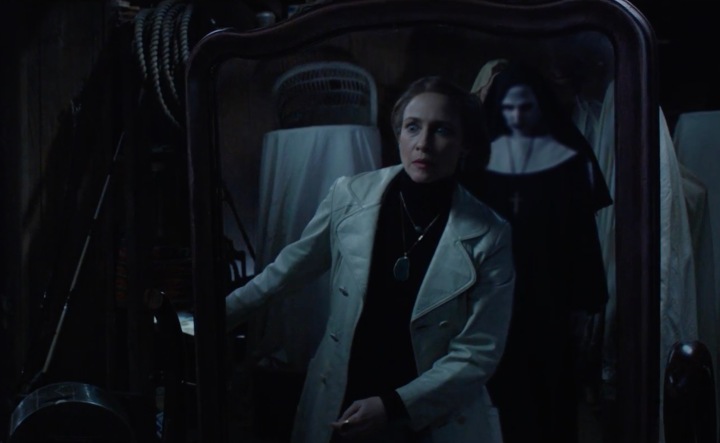 Continuing on with the dread that filled up the first film, could James Wan have done himself much better? I would not have thought so but The Conjuring 2 has proven me wrong for he indeed provided a rare instance where the sequel may have improved upon its own predecessor. Like the predecessor, there are many things to be expected of the haunted house subgenre of horror films but where James Wan allows for forgiveness from what appears already as familiarity arises come from his understanding of the effectiveness that shaped the genre. What I can say about James Wan is that within the future, I can only expect greater things for the horror genre under his own hands. You can’t expect another Exorcist for few horror films (or few films in general) ever can match its own legacy, but The Conjuring 2 provides what the first gave off, and a little bit more at that too.

The first film worked was on a count that in spite of playing on familiar notes, it still understands why they were so effective and in turn churns out something that reminds us about what it is that we love about the very best horror films. We don’t watch horror films in order to watch one lazy jump scare play after another, but it’s how watching a film like The Conjuring 2 manages to evoke a specific feeling out of the audiences that soon makes what could easily come off as a lazy jump scare work much better than expected. As lazy a gimmick it can be for many modern horror films, an effectiveness comes from the manner in which James Wan chooses to execute them, for he perfectly establishes a good setup before unleashing the upcoming terror at hand.

One of my own problems with the first film comes from how in spite of the interesting personalities which the Warrens carry, they never have enough character in order to back themselves up. Where The Conjuring 2 manages to improve upon this is the establishment of their relationship before they take on the case over at Enfield. From here, James Wan gives room to Vera Farmiga and Patrick Wilson so that they can flesh out more humanity to their roles as the Warrens. Within no time, the pair not only have a great deal of chemistry between one another, but more of an emotional attachment to these people comes in and soon, a better sense of development is what we are provided.

Where James Wan also seems to have a clever eye is in his picking of child actors for the parts which have been written for them. My case in point comes from Madison Wolfe, who plays Janet Hodgson. In this role, the emotional arc comes perfectly put together when Wan works to make her part heartbreaking and terrifying at once. Like the audience, a terrified feeling runs through her body as she feels the presence of the demon in her residence. During moments in which she is being used for possession, a strange form of beauty arises from how Wan is crafting the dramatic arcs between everyone whom he is working with. We see terror arising as much as we are also witnessing something magnificent within the heartbreak in Janet’s weakness from the demon.

For how much James Wan crafts so perfectly within the visual details, providing a fitting colour palette to set the tone of most of the film, it seems as if there are aspects to which this also detracts from the experience. The CGI, together with the designs for the demon, is where something great is arising. It is from the Crooked Man where The Conjuring 2 finds itself faltering. The Crooked Man in itself could have been a much more interesting character, for at least the zoetrope which the Hodgson children are playing with could promise. It is from the design of the creature in itself where something underwhelming comes, and not only that, but for how the demon itself was perfectly set up, the Crooked Man feels only like an image without context.

It is already hard enough to find horror films within the mainstream that play on completely original beats, and while The Conjuring 2, like its predecessor, falls under beats of familiarity, Wan’s understanding of the roots that create a good horror film are where we have something more at hand. Where The Conjuring 2 manages to improve upon the first film, however, comes from how it feels as if more of an emotional arc with the Warrens is fleshed out and thus, a greater attachment to them from the audience is formed. We are indeed left with a step up from entries typical of the genre from recent note, and while it is occasionally spotty, most of it runs effectively in order to be forgivable enough. It was clear James Wan had only been warming up with the first Conjuring film for something more, and he only gets better over time. I’m already sitting here wondering what future projects from him can be, maybe in no time, something all the more wonderful.