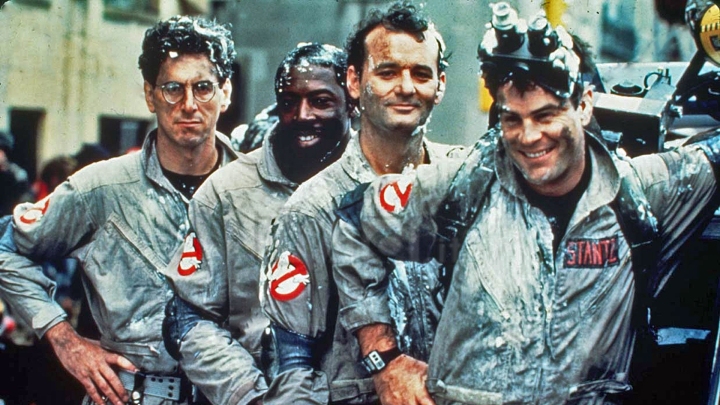 I never had so much of a close personal attachment with Ghostbusters in spite of how highly I enjoy it every time I come back to watch it. As a staple of the 1980’s, it shows its age but because of the time period which it is representative of, I’ll give it a pass in that area. Yet there’s still a level to which I do admit that I love Ghostbusters for it still puts a smile on my face, because it delivers what the title promises, it’s spooky and funny. Regardless, it’s interesting just coming back to Ghostbusters after years of not having seen it and within due time, there’s a sort of glory that can be found with the atmosphere to which it creates, which helps in adding up to why it would be seen as one of the comedy greats. It may not be as perfect as its fanbase insists, but as it stands, it is what it promises and nothing more.

Although it would be easy for one to note how the visual effects are dated, the fact that Ghostbusters is a staple of its time period is enough for me to give the aging a pass – but when looking at it today, there’s a point to which one can go and see it as a B-movie had it been more self-aware about what little assets they have and they try to make the best of it. It is clear already from how Ivan Reitman’s directorial choices choose to contain a visual style that would resemble a horror film which after being put together with the goofy characteristics that come from the lead characters, it’s clear how the people behind it are doing their best with showing their love for B-movies by reveling inside of their glory and being self-aware about it, whether it come from the cheesy visuals or the elaborate set design especially in the climax.

Establishing the characters is one thing, but a key factor as to why we have come to enjoy watching these people give their presences to the screen arises from the incorporation that they are still ordinary people just like others all around them, something that is made clear from the introduction of Bill Murray’s Peter Venkman in which he is “conducting” an experiment as a means of getting a girl for himself (eventually leading him to his awkward interactions with Sigourney Weaver’s Dana Barrett). The fact that these people for how smart they appear to be can be anyone around us adds more to the charm which the cast carries throughout as misfits. For that alone, such charisma can only make everything all the more endearing to watch because even when encountering much bigger conflicts, they don’t know what they’re doing and it’s funny.

Dan Aykroyd and Harold Ramis, who play Ray Stantz and Egon Spengler, provide a script with witty one-liners coming in then and there. While the dialogue is filled with technobabble the fact that most of it is nonsense adds more to why it comes off as funny. The many great one-liners are never overshadowed by the visual effects but instead they add more to the glory to which Ghostbusters is reveling in and with the delivery coming out of Bill Murray (possibly the one factor that defines the film’s very best comedic moments), one could not expect any more than what is provided. For how nonsensical the plot may sound, it’s the brilliant writing that makes everything work as well as it does and one can also note a brilliant criticism of sleazy commercialism, in regards to the effect on civilization.

Unfortunately, for how brilliant all of it sounds, I still have an issue with the roles of its female characters. It was from here I realized that the reboot with females would have made more sense, because Sigourney Weaver and Annie Potts had rather lame roles here which in turn undermine their talent. Although Potts still does her best especially with her own attempts at coming at Egon Spengler, something about the delivery just felt off. Sigourney Weaver’s part never had much significance to the story up until she has been captured by Zuul, and prior to that moment she is only around for Bill Murray to make a fool of himself (and while that happens, it’s still charming, I won’t lie). Potts and Weaver deserve more, but the script’s treatment of their characters to some extent just rubs me the wrong way.

I never grew up on Ghostbusters so I can’t claim I hold any nostalgic affections towards it, but every time I watch it, I can’t resist the charm it creates from the chemistry of its leads. I can understand where it would have its fanbase, but something to which I find absolutely baffling is how it is so sacred to the point that a gender-reversed reboot from recent years is garnering unwarranted hate towards its cast and crew and suddenly everything transformed into a ridiculous political background. As a staple of the 1980’s, Ghostbusters is doing its job very well and it carries the charm that defined such a period, whether it be from the visuals or the catchy theme song. Though, I can’t seem to imagine it working without Bill Murray’s charm.