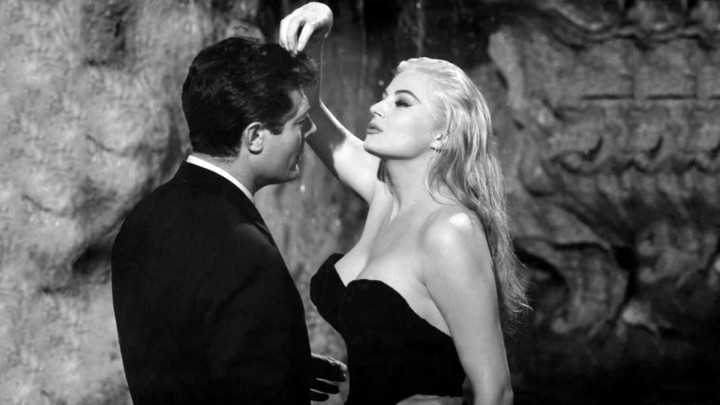 La Dolce Vita, or, “the sweet life,” is the kind of film that goes to remind a person like myself what is the life we wish to find at one point – the kind of lifestyle any normal being would desire. Federico Fellini’s wonderful film, his magnum opus for the matter, remains one of those films that always surprises me every time I come back, for there’s an overwhelming sense of awe and wonder left behind on every visit. It truly is Federico Fellini’s masterpiece, one can not simply get any better than La Dolce Vita. The only one that can come close to rivaling such beauty would be Fellini’s own 8½, but even with that said, both are examples of creativity exploding at some of its very most especially amongst all of cinema.

It’s within the opening of the film in which we get a symbol, through the image of the statue of the Christ lifted by a helicopter and flying over Rome. It sets a high note for what is to follow onward, and it’s an adventure that left me captivated from the first scene all the way to the very last. We can imagine that it symbolizes Christ is leaving his blessing across all of Rome, and maybe this is indeed that “sweet life” under the blessing. Yet considering how it flows all over those living within the “sweet life,” what exactly has been left for those who are not part of it? That is where Federico Fellini leaves an underlying cleverness to La Dolce Vita.

This whole film is told in episodes that detail the journey of a journalist, Marcello. This journey shows him as he tries to find what truly is “the sweet life” especially when so much about this world is left overwhelming to such an indescribable degree. What Marcello is covering in his paper include the popular stars, the religious visions, and the self-indulgent aristocracy all around the society. Because of how much of this is only left to overwhelm, is there a sense of peacefulness to be found? We all think it seems perfect just from the way it looks, but it is all just an image left to fool our eyes. Either any regular being may not be ready to enter such an area just yet as perhaps, it’s just far too much to handle.

To some sense, what we’re seeing is Marcello wandering into a story that could essentially be F. Scott Fitzgerald’s The Great Gatsby. And because of this coming into mind, I’m only left to question, is this “sweet life” truly as sweet as we believe it to be? In the same manner that The Great Gatsby details how the American dream may not be as satisfying as imagine it to be, La Dolce Vita does the same for what it is already describing as “la dolce vita.” It’s always interesting to see where Federico Fellini is going about with this idea of what some people picture as the aforementioned “sweet life” especially in his picture of his protagonist’s trials.

What’s especially overwhelming about the film’s deconstruction of such a lifestyle is how Fellini only goes to fill up his audiences only with more of what is believed to be a good life, the one that Marcello is seeking. He is calling for his audiences to take on the perspective of Marcello, by showing us images of supposed “good lives” and we are left to contemplate, is this really the sort of lifestyle we would desire? The higher class, with all these joys, yet little peace. The lower class, with so much peace, yet rather depressing. What has happened to the middle ground? One that balances out joys and sorrows, like the ordinary day in anyone’s life. Has it disappeared because it is seen as mundane?

Amidst all the vicious social commentary we are also given something so beautifully photographed it soon becomes difficult to pinpoint specific scenes we adore so much out of such a wonderful film. It is so perfectly framed, so perfectly set up, so perfect in its design, whether it range from the glorious opening sequence to the famous sequence in the Trevi fountain, I just look at the screen and I want to talk about what makes all of it so beautiful but it becomes a struggle. Because how do you talk something as overwhelming an achievement as this? Many words flow into one’s head and it’s near impossible to collect a solid gathering of what it has accomplished while it lasted.

Everything about La Dolce Vita is most simply dazzling. It is so perfect in every sense, from how all of it is structured to its commentary on society and its philosophies, to call La Dolce Vita essential viewing understates it, it is an essential experience. And here I am, only wondering to myself, does the “sweet life” really exist when so much is given to the overwhelming degree? La Dolce Vita is the sort of life we think we are desiring. It pulls you in enough to breathe and live that atmosphere to the point, it destroys every sense of the emotion, in the manner some of the very best pieces offered by cinema should. La Dolce Vita is more than just a perfect film. Even saying it’s a wonderful experience understates it.