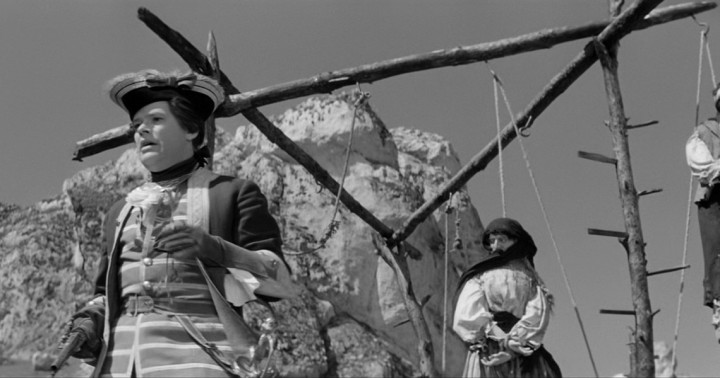 This wasn’t a film that I was ready for. Wojciech Has’s The Saragossa Manuscript is an experience like no other, something that also went ahead and drew back my memories of Frantisek Vlacil’s Marketa Lazarova – in the sense that what I was watching only left nothing more or less than the overwhelming impact upon myself, a feeling that can’t exactly be put into words. Part of me felt that while watching The Saragossa Manuscript, what I was witnessing on the screen was not merely anything that the human mind could have concocted right on the spot. Extraordinary can be one thing to describe what The Saragossa Manuscript is, but once it has been witnessed, something all the more mind-spinning is left behind and it soon feels like an understatement, as it’s hard to make sense of such a creation.

Adapted from the novel of the same name by Jan Potocki, the film is set within the Napoleonic Wars in the Spanish town of Saragossa, we are told a story in two parts of a discovery that opens with a Polish officer entering an abandoned house reading a manuscript with no understanding of the language. Enemy officers arrive on the spot in order to arrest him, but another officer stops to read the manuscript together with him, recognizing that it is about his grandfather. The ancestor is Alfonse von Worden, who was a captain in the Walloon guard. The first part of this story details the mind of the captain, whose confused state in turn mirrors the audience upon witnessing the structure to which The Saragossa Manuscript is following.

With the opening establishing the story-within-a-story narrative, everything becomes all the more complicated as the film goes on. Inside of its first half, we are simply following along with the story of the enemy’s ancestor and his trial back to Madrid with very little time on his hands. In the first half of this complicated story, we are left exploring how his mind had been bringing him around these many people who distract him upon his trial, with all of these stories to which they have to share. Though his mind also serves as a mirror for the confusion to which one can experience when they are engulfed within the many narratives which are at play in The Saragossa Manuscript. Captain Alfonse von Worden is indeed a man who is of honor and courage but his own destiny presents some sort of odd experiment that has never (and is most unlikely) to be repeated with the same sort of experience which had been left in such a film.

Setting established, it is also rather intriguing to see how such a story keeps itself flowing – for it is not only fueled by the mind of the captain but also many background elements come into play. It is a gothic tale which we are being told, but also a funnily surrealistic one. The Saragossa Manuscript in its glorious scope fits as much as it can into its running time, as the story-within-a-story framing also begins to put more genre elements into place and in turn create the fascinating experiment to which this was. It tells a story of the many comedies which fill up the protagonist’s mind and as it passes on his confused state of mind to the audiences within whatever they are witnessing, there are allegories that draw back to what would be noted as scandalous for the time period in which it had come out. Speaking on a narrative perspective and what The Saragossa Manuscript had been willing to show for its time, something daring is what we are left with.

When part two hits, the film takes a different turn with its own narrative as things are only set to get more complicated but it also goes on to present food for thought. As many of these tales being told within the story we are watching are coming into play, some of them also intertwine with one another, suddenly a much wider map has been created. Everything that felt so disorienting within the first part all manages to come together in the second portion of the story. Yet maybe there was a reason for the disorienting frame of mind which the film has left its viewer within, especially once the climactic sequence hits. The experiences from the captain and the many people whom he has all met come together at one specific point, and the connection that forms is something that truly is unlike anything else one can ever see.

Visually, it is rather easy to say that The Saragossa Manuscript is a feast for the eyes. When it comes to the elegance of the set design down to the costumes, everything it manages to evoke leaves on a superb note. Mixed together with the beautiful cinematography, what is left behind by The Saragossa Manuscript is borderline seductive from start to finish, for it is always presenting more to discover within its large scale. As more things are to be discovered within such a complicated story, suddenly the beauty which the film is leaving for the eyes turns frightening, adding more to the surrealist nature. Critical moments much like these build up to the power that is left behind in The Saragossa Manuscript.

Nothing else I have seen has hit me in the manner to which The Saragossa Manuscript has done so. From the excellent performances to the downright frightening descent into madness which defines such a piece, there is never a moment to which it is boring. This is a unique experiment with narrative that is unlikely to ever be repeated, for only a filmmaker like Wojciech Has could create something so surreal to the very level of disorientation, but maybe there was another allegory being left behind. With the film’s setting during the Napoleonic War, perhaps it could have been a representation of the state of mind that hits upon one during such a harsh time. My first Wojciech Has, and certainly not my last one – it’s an experience words cannot capture, for I was not ready to be hit with such an overwhelming impact upon myself.

All images via Film Polski.