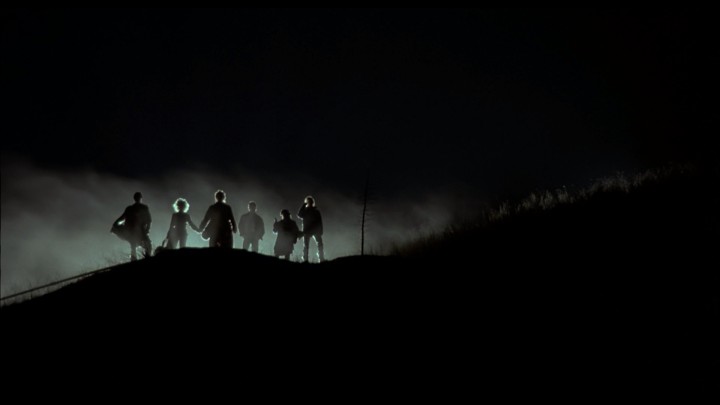 In recent years one would recognize Kathryn Bigelow for her more politically-oriented collaborations which have received Academy Awards recognition: those two films being The Hurt Locker and Zero Dark Thirty. I’ve admittedly put off Near Dark for the longest time because vampire fiction generally never grabbed my interest enough, but eventually I came around to having watched it only to have my expectations blown further away. Near Dark is not only one of the most compelling pieces of contemporary vampire fiction put to the screen, but it works the way many other monster films in the 80’s have done so: all to a truly glorious effect.

From the way Near Dark is composed, whether it be from how Kathryn Bigelow chooses to frame specific shots or how she arranges the set pieces, in order to blend both the horror and the western genres together – it elevates its own content all the more and as a result, revives the seriousness of vampire fiction especially during the era in which it had come out. If only Near Dark could be shown to audiences today to remind them of how the best understandings of vampires actually play themselves out to be, that would be something more pleasing than ever because it still rings true to what vampire fiction at its best has always been about and what it had going for it.

The first moment in which Caleb and Mae meet up, we are hinted towards a romance that soon turns into something else when we find out the sources of Mae’s roots, all sense of innocence which appeared at first is taken away. Caleb ends up turning into one of them, and as his father is trying to come and take him back, that is where a clever allegory is presented. Caleb is an innocent man, and vampires represent drug addicts, and although said roots are not particularly original, there’s much to admire in how Kathryn Bigelow is moving along with it and within no time, Near Darkbecomes one of the most distinctive works of gothic fiction of its own kind.

At the time of Near Dark‘s release, it was overshadowed by Joel Schumacher’s The Lost Boys, which chose to take a more comedic path. Yet Near Dark shows a much better understanding of vampires in general when it comes down to how it chooses to depart from convention by turning it into a Western at the same time and also have a love story coming into play. Bigelow never lets the romance sink the story which she tells down to the levels of sentimentality, but instead she uses it to add a more melancholy effect to the relationship which Caleb and Mae have formed between each other, adding more to Bigelow’s best skills with genre subversion. She takes characters who are monstrous and lets out the humanity from them, and for how deplorable their actions can be, empathy can always be felt.

If there was yet another thing to point out as one of the film’s many highlights, we have Tangerine Dream’s score. It would be one thing to note how their scoring here is indeed some of their best work as of yet, but to note what it also adds to the atmosphere which Bigelow is establishing is where Near Darkachieves something more at hand. Mix in the excellent acting from Adrian Pasdar and Jenny Wright, something all the more glorious is coming into play – for they are only preparing one for the excitement that is set to come with finally meeting up the rest of the vampires. If there had to be one of these vampires that stood out, however, I’m pointing nowhere else other than at Bill Paxton, for not only does he have the most memorable character in the bunch but also some of the film’s most memorable scenes overall.

Near Dark is the best sort of subversion one can ask for, and in that sense it feels fresh even though it shows some signs of aging. Kathryn Bigelow’s first attempt at solo directing and quite possibly her finest achievement yet, as Near Dark truly is one of the most unique products of its own sort. Bigelow has formed something that blends vampire fiction, romance, western, and the road movie all to a glorious result – and what’s actually quite stunning for a vampire film is the fact that the word “vampire” is never used even once. But there’s a whole lot more to which I can ramble on about, as Near Dark is just all sorts of wonderful all around.

All images via Lionsgate Films.

2 thoughts on “Near Dark – Review”