I’ve heard many comments who share my indifferent feelings toward the original film that cite Ju-on: The Grudge 2 as an improvement upon its underwhelming predecessor and while I can find myself agreeing with that part, unfortunately I can’t really say much overall because I also found this sequel to suffer many of the same problems which had plagued the original. Takashi Shimizu seems to have shown some improvement with his substance at least from what a year’s worth of passing since the original film can tell but maybe it was at a level to which he wanted it bring everything out so early. Seeing what Takashi Shimizu has brought here, however, did make me interested in giving the American remakes a revisit, if something managed to come out of watching the original Grudge films. 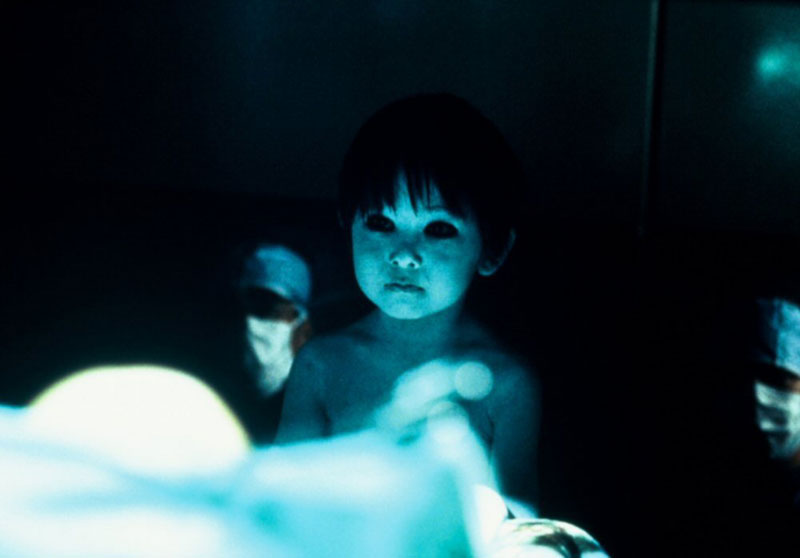 Toshio Saeki calling for his mother in Ju-on: The Grudge 2.

Like the first film, we also are being shown events in an episodic format all within a nonlinear narrative. In the first film, the segments focused upon Rika, Katsuya, Hitomi, Toyama, Izumi, and finally, Kayako. Now, we have Kyoko, Tomoka, Megumi, Keisuke, Chiharu, and the highlight of the series as always, Kayako. But given the fact that we are being told a story that almost mirrors the format given to the first Ju-on film, it also suffers from the fact that one would already recognize how everything is set to move forward because its plot carries many of the same elements that the first film features especially when we are talking how each of them are set up and structured.

There’s so much that could so easily have worked so splendidly about Ju-on: The Grudge 2 for at least now we get more insight about Kayako Saeki’s past especially when it comes to the vengeful spirit of her husband, whom, in part had left the effect of the curse amongst those who are set to be haunted the moment any of the bunch enters the house of the Saekis. The highlights of both films especially are what can come out from the presence of Kayako Saeki, for the image she leaves behind together with the eerie sound effect of her aura is indeed a haunting one – but like the first film it seems that it’s all wasted rather terribly.

Where it seems as if Ju-on: The Grudge 2 manages to improve upon what its predecessor had not done well enough, however, is how certain stories feel much more compelling especially when put up against others. A greater sense of conflict comes about with the first vignette, whose primary focus is on Kyoko, who eventually gets cursed by the ghost of Toshio Saeki. It seemed promising from there alone but soon enough the problems that ended up plaguing the first film become all the more apparent and suddenly interest begins to fade.

The first Ju-on film ended up suffering on the count that it felt rather repetitive from the moment the first segment ends, as many of Kayako’s attacks come in a manner that repeats every segment and never really seems like enough to leave its mark upon the viewer especially when the well-built atmosphere never matches together with the uninteresting set of characters who are the focus of our attention. When you get a hold of one attack, you know the point to which another is going to come by in another segment, but there is never any real interest to feel any of the tension that Takashi Shimizu wants to place because, quite frankly, there is no real reason to find oneself caring for the overall conflict because too much of everything felt so stale.

Fans of the first Ju-on film are sure to admire what this sequel is set to present but my indifferent reactions carried on when I knew that even with the noticeable improvements laced in, I was merely watching a film that was essentially the same as the first and aside from a few characters that draw interest, not enough of it had come by. At the very least there’s Kayako’s presence who is sure to leave a lingering image inside of one’s head but for everything that works so well in Ju-on: The Grudge 2, a lot that doesn’t also becomes incredibly clear in the same manner that had plagued the first film. At the very least, I’ll admit that I enjoy it over the predecessor because of the Kyoko episode, but after that, it was easy to find myself thrown off.

All images via Nikkatsu.