In America, it would be easy to recognize Ju-on: The Grudge for being the original source of its remake of the same name, for they also share the same director and the same antagonist in both the English and Japanese language versions. Unfortunately it also seems as if they also share the same quality of being rather underwhelming, something which seems to have run common with my own experiences watching the original sources for American remakes of Asian horror films. Conceptually, there’s so much interesting about Ju-on: The Grudge that should make everything far more interesting but after having finished up I felt so greatly disappointed. 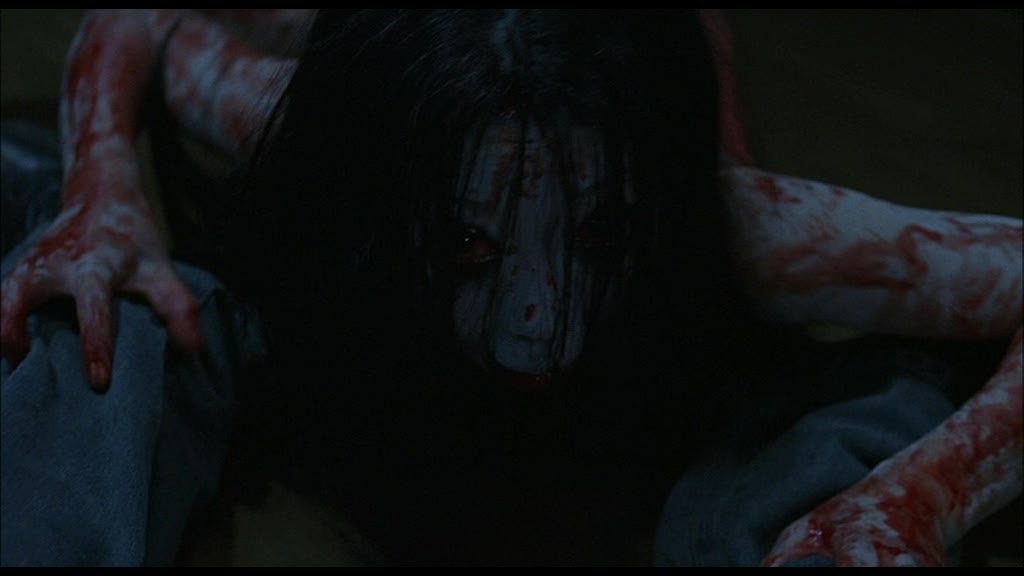 Kayako Saeki as played by Takako Fuji in Ju-on: The Grudge.

Ju-on: The Grudge employs episodic storytelling, not being shown in linear order and all over the course of a number of years – all of whom are linked from the fact that they are haunted by the ghost of Kayako Saeki. More specifically, the whole premise of Ju-on: The Grudge keeps a tight focus on a curse that has left its mark inside of one specific location after Kayako Saeki, who was brutally murdered by her husband together with her whole family after the suspicions of an affair. All of these episodes come together as more people visit the same spot where the curse had left its mark as the vengeful spirit of Kayako Saeki pursues anyone who disturbs.

Admittedly, there are many interesting things going on with what Takashi Shimizu wishes to explore in Ju-on: The Grudgeespecially with the world around Kayako Saeki. At its most effective, the atmosphere that borders Kayako Saeki makes for some excellent scares but something about it also feels lifeless. Takashi Shimizu seems to know what it is that he wants to establish in terms of environment especially when it comes to the origins of Kayako’s curse, but there was a point to which it can almost come off in a rather expository manner and within no time, the presentation only became extremely tiresome. Some things are clever, especially with how it keeps oneself unsure of what is going on because of the structuring, but with how much ofJu-on: The Grudge works so well, a big chunk does not.

If there were one thing that had come to mind while I was watching Ju-on: The Grudge, it is far too easy to foresee what is set to come after two episodes pass by, for Takashi Shimizu seems to repeat a similar story for a fair amount of time up until its ending segment where an explanation comes about. The repetitive nature of the film only ended up working as a detriment to the overall experience because there was a point to which I already saw when Kayako was set to come and meet up with whoever is the focus of our episode and the buildup never feels like it moves anywhere because it only results to the same result at least half of the time. What also doesn’t help is that outside of Kayako, none of the characters are especially compelling, which is a shame because most of the tension is extremely well-crafted – only to be given characters whom I end up not caring for in the backdrop.

Kayako Saeki herself is easily the best aspect of the film, for she feels like the most well-rounded character amidst all the stories that are being told. Kayako Saeki’s presence leaves behind a haunting aura from the moment in which you hear her distinctive sound come about, and the second it chimes in, an impending sense of doom comes about that ultimately sets the perfect tone for the film. Takashi Shimizu always lays around the best moments for her presence to come about, which is what saves the repetitive nature of each episode from being wholly uninteresting. It’s a shame that Kayako herself is wasted for an outcome that never seems to amount to much by the end of each episode, adding more to my overall dissatisfaction with Ju-on: The Grudge. It wastes all of its greatness on something that in turn, just feels so empty by the time it ends.

So much of Ju-on: The Grudge is effective but for how much of a film that I really like can be found, so much at the same time is just tiresome because one can catch the gist of what will happen after a few episodes come by. I’m certain that this film is going to have its many admirers to be found, and there’s an extent to which I will recommend it because there’s a crowd whom this film will certainly find its appeal towards. Unfortunately I can’t say that I’m one of them because after a few episodes, I just got tired of watching different sets of characters whom I never cared much for falling victim to a wasted presence. Talk about a grand disappointment in this experience.

All images via Nikkatsu.