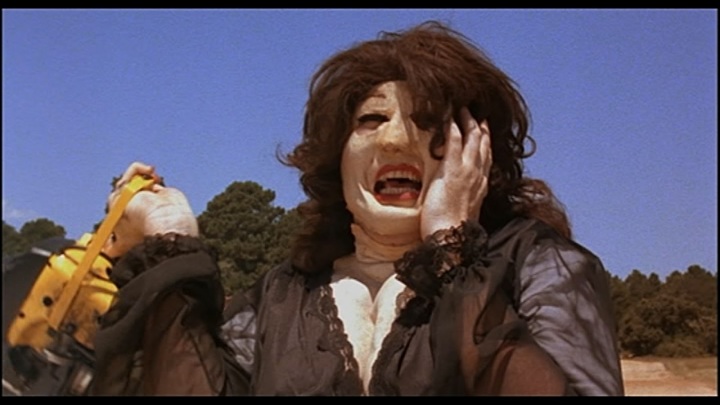 I should vehemently despise this film on all counts because it destroys practically everything that The Texas Chain Saw Massacre had stood for in the beginning, and yet there’s so much about it that’s so enjoyable in such a stupid manner. It’s so easy to note where Texas Chainsaw Massacre: The Next Generation is messing everything up so horribly and yet it’s all just so fascinating to watch while it’s running. With Tobe Hooper out of the franchise and now with Kim Henkel taking full responsibility, it is just baffling to see how one of the original creators of one of the most terrifying pictures to have graced the screen is destroying what he had created to begin with, all right before one’s eyes. And on all counts possible, Texas Chainsaw Massacre: The Next Generation is just a disaster.

This time, Texas Chainsaw Massacre: The Next Generation only makes itself a quasi-sequel to the original film and only feels connected to the previous two sequels in such a loose manner. Now, our focus has shifted once again to a route almost similar to where the original Texas Chainsaw Massacre intended, as now we are going back towards focusing on a group of teenagers who are about to fall victim to Leatherface and his family of cannibals. Our group now consists of Jenny, Heather, Barry, and Sean, who are celebrating during senior prom and get into a car accident. Amidst the scene of the accident, two of Heather’s friends end up wandering towards the property of Leatherface’s family, and suddenly everything begins to turn for the worse.

With the obviously blatant retreads upon the original film being put in front of your eyes, the cast never makes any of it better, for there never seems to be enough sense of conflict to grant a sense of interest in any of them. However, if something were to enhance the experience of watching Texas Chainsaw Massacre: The Next Generation, it would be the very presences of both Renée Zellweger and Matthew McConaughey. Normally I’m one to say on the spot that I’ve never been a fan of Renée Zellweger’s, but I would not lie when I’m going to say watching her try to escape what she was in for in here was already hilarious enough. The sheer presences of both Zellweger and McConaughey are so unfitting for the environments that they are placed within, to the point that the awkwardness which they emit is what ultimately makes for a rather enjoyable experience.

Most baffling is the title that it bears, The Next Generation. If the title of the previous sequel, Leatherface: Texas Chainsaw Massacre III was not baffling enough, then one is not prepared for The Next Generation. I’m especially baffled because, quite frankly, what “next generation” are we watching? Are we watching another generation of characters getting themselves into Leatherface’s habits? What more even is there to Leatherface, who was already a monstrous image that defined the first film? A new generation for Leatherface’s family was one thing I was thinking, because for once in a film whose most terrifying aspect was the fact that the antagonists were a family of cannibals, it was stunning how Kim Henkel decided to bastardize it, now by having them eat actual food in one scene. If this were the reasoning to justify “the next generation,” all I can say is that it was lame enough and it just destroys the image ofThe Texas Chain Saw Massacre all to such hilarious results.

Most of Texas Chainsaw Massacre: The Next Generation is something that I should get angry at, but I can’t help but find all of its idiocy so fascinating to watch. And even more stunning was just the fact that it came from Kim Henkel, who was responsible for writing the original masterpiece together with Tobe Hooper. Apparently the production history had gotten so wild that it had been re-released and recut after Renée Zellweger and Matthew McConaughey became much bigger stars. I’m not even sure what exactly I was supposed to make of it in the first place, because if it were trying to be funny, it was bringing everything in all the wrong places and just as the Texas Chainsaw Massacre films have went on, they were only growing much weaker in terms of the efforts put into the horror. Which is a shame, because they have certainly come a long way from the intensity which the original masterpiece had provided. But if you want to watch what the original had intended going wrong to the manner you can’t help but laugh along, that’s where Texas Chainsaw Massacre: The Next Generation is surely to come in handy.